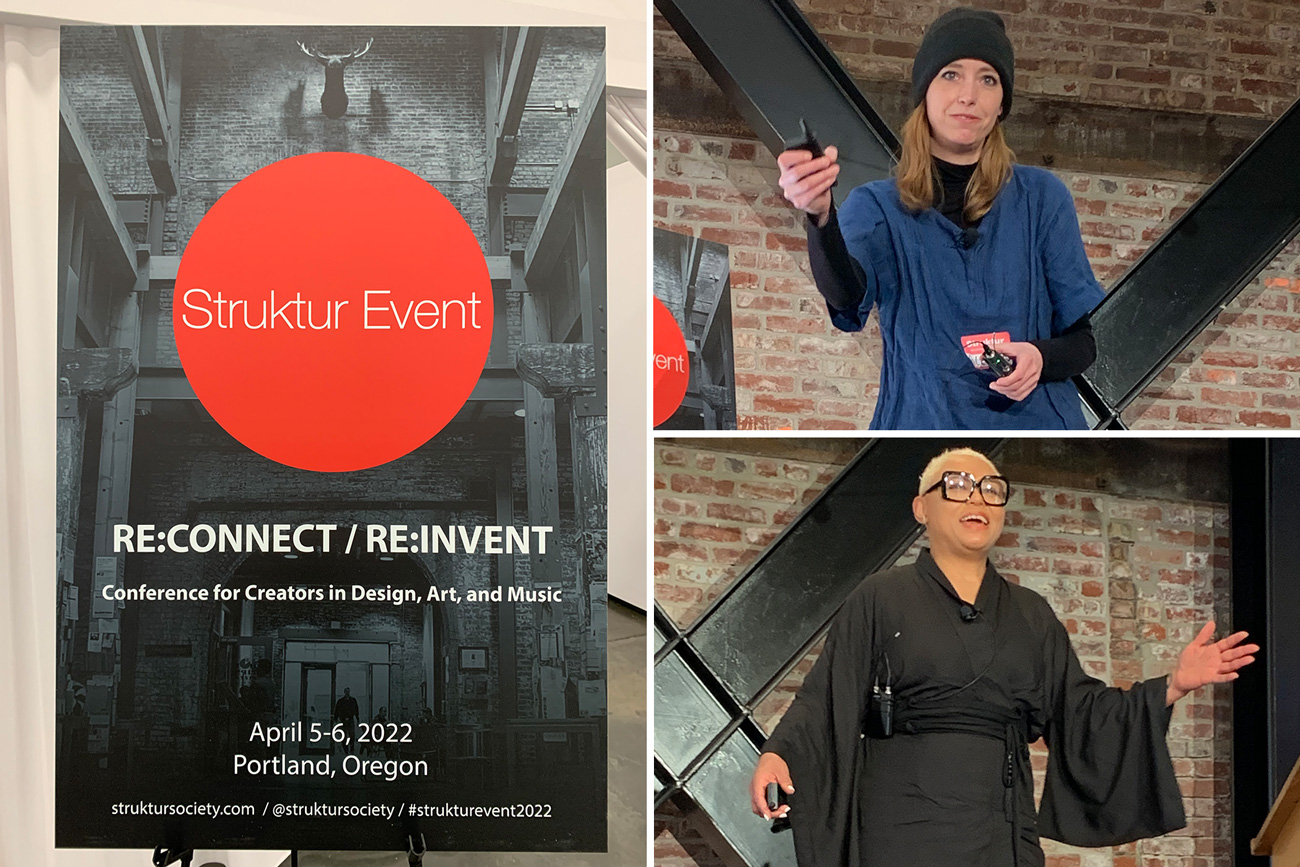 “The future is not only bright, it is techno-colored,” stated Nadine Johnson, whose pitch-perfect presentation on the metaverse kicked off  Struktur, a conference for creatives, making a welcome return earlier this month after a few years hiatus. Johnson’s deep dive into “The Wild West of Web 3” struck just the right chord with the crowd gathered for an event focused on re-invention, re-connection and self-reflection.

Johnson, a design and innovation specialist, describes the metaverse as innovative, and lucrative, and in her view, a “wander-ful” world. It is also educational and useful for our industry. She suggested, for example, using Virtual Reality (VR) to tour a factory in Asia without leaving your home base, or designing products for a specific metaverse event, and/or designing garments for sale on the metaverse. Johnson offered, “For outdoor on the metaverse, why not create mountain goat legs versus a pair of shorts for climbers?”

Held earlier this month in Portland’s Pearl District, Struktur speakers sought to inspire, provoke and generate buzz during the day-long, in-person conference. Struktur Event workshops were held the previous day at the Oregon Convention Center in a newly-established partnership with the Functional Fabric Fair. Struktur attendees included a range of creatives, including apparel and footwear designers — many with deep roots in the active/outdoor industry — alongside musicians and artists.

Angela Medlin, founder of FAAS Design Collab, whose career spans designing and directing for Nike/Jordan, adidas, TNF, Levi Strauss, Eddie Bauer, and Cross Colours, explained that designers are problem solvers. She stated, “If you are not creating something that solves a problem then you are creating something for the landfill.” According to Medlin’s rulebook, “Empathy is a good first step to good design.” Her next big thing is a FAAS x REI Co-op partnership offering a design certification program for aspiring creatives and designers from historically underrepresented communities. (FAAS stands for Functional Apparel & Accessories Studio.)

The value of designers, and the important role designers play in the apparel and footwear community, and the world at large, is foundational to Struktur. “The impact designers have should be valued; designers belong in the front, not in the back,” stated Michelle Rose, a Struktur founder, with top-level design experience at Columbia Sportswear and TNF, in addition to independent work. She  believes “now we need designers to lead; It's a time when thinking needs to be re-invented.”

Rose launched Struktur to create an event designers want to go to, not an event based on what companies think designers want. According to Struktur participants, Rose has achieved her goal. “The typical conference is all about profitability, efficiencies and networking, or all the talk is about tech. Which is why I don’t do conferences. That’s not Strukur,” said Trent Bush, founder of the brand Artilect.  Smartwool’s design director Sue Jesch commented, “I wish my merchandising team was here. It would offer a higher level of understanding of challenges, and the problem-solving, designers face and in so doing prompt more respect and support among all team members.”