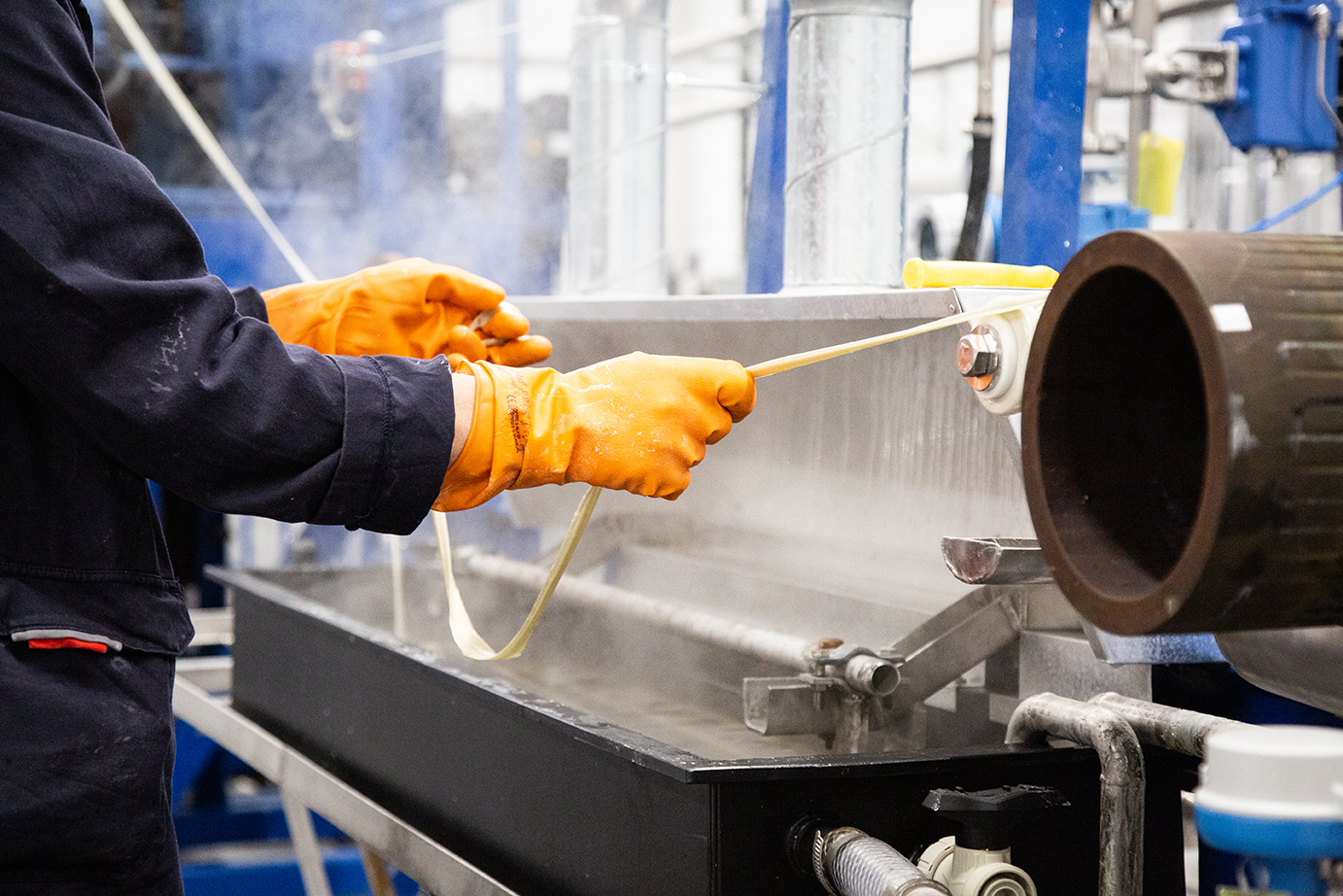 Most of us are somewhat familiar with textile recycling, with recycled polyester, and recycled nylon, well-commercialized, yet the share of post-consumer textile waste recycled into new textiles is shocking — less than 0.5 percent in 2021, according to Textile Exchange.

Fiber recycling’s potential is limited by many factors, according to Brooke Roberts-Islam, a senior contributor for Forbes, who highlights fragmented infrastructure, downgrading of recycled materials, rapid growth of fashion consumption, and the vested interest of petrochemical giants (amongst others) as elements contributing to maintaining the status quo on virgin fiber production.

Another major roadblock hindering recycling efforts has been technology designed for sorting and deconstructing textile waste by fiber.

Now, however, new innovations in chemical processes for separating and recycling cellulosic fibers offer an alternative path to textile circularity.

For example, a July 2022 report by McKinsey & Company lays out a hopeful scenario for scaling up fiber-to-fiber recycling in Europe, which could reach 18 to 26 percent of gross textile waste by 2030. Separate collection for textile waste becomes mandatory for Finland in January 2023, and across the EU in 2025, making feedstock readily available.

Located near producers of pulp and paper, northern European universities and companies have long researched cellulosic chemistry. In addition, recycled cellulosic fibers are biodegradable, dodging the issue of microfiber pollution, as well as enabling circularity and touting smaller carbon footprints.

Start-ups creating new cellulosic fibers from the 7 million tons of cotton-rich waste collected each year, along with wood and agro-waste, are attracting interest and investment from apparel brands, retailers, and financial firms.

With plans to build a €400 million factory in Kemi, Finland’s northernmost region of Lapland, Infinna from Infinited Fiber Company holds the potential to become a mainstream material, according to chief marketing officer Tanja Karila. The factory is expected to operate at full capacity of 30,000 metric tons in 2025.

Infinna is created from cotton-rich textile waste, and can also be made from other cellulosic materials such as cardboard or rice straw. After any hard parts are removed, the materials are shredded, and the cellulose separated from other fibers. The cellulose is activated with urea to create cellulose carbamate powder, which is subsequently turned into a liquid, then wet-spun, washed and cut to create staple fibers.

“Because the fiber is regenerated (with the cellulose in cotton broken down to the molecular level and then regenerated into brand-new fiber), it is comparable to conventional virgin fibers, and issues like the shortened length of fibers that come up with mechanical recycling are not a problem,” explains Karila. “It has the hand feel of cotton, meaning it feels lovely against skin. It can also be processed in existing yarn and fabric factories, meaning brands can use their existing supply chain.”

The production of an Infinna t-shirt uses 99 percent less water and creates 67 percent fewer CO2 emissions compared with cotton; and eliminates the use of carbon disulfide, a hazardous chemical used in traditional viscose production.

Products made with Infinna fiber include t-shirts from Pangaia and denim jeans from Wrangler. Inditex, the parent company of Zara, recently made a commitment of €100 million to buy 30 percent of the future annual production of Infinna.

Renewcell’s Circulose is a dissolving pulp made of discarded cotton garments. The shredded and bleached waste fibers are separated from any synthetic polymers via a solvent-free process before being turned into dried, white sheets of pulp that look like thick paper.

Sold downstream to yarn spinners and textile manufacturers, Circulose is an alternative to cotton or trees for the production of cellulosic fibers. Renewcell estimates the carbon footprint of Circulose as -2kg CO2e per kg.

In June, Swedish Renewcell and Swiss HeiQ announced a collaboration to create and commercialize HeiQ AeoniQ cellulose filament yarns from Circulose pulp as a viable replacement for fossil-based fibers like nylon and polyester.

Renewcell is due to open a $100 million Circulose plant in Sundsvall this year, with an annual capacity of 120,000 metric tons; and a goal of producing 360,000 metric tons of recycled fiber annually by 2025. The company has a five-year agreement with Chinese viscose producer Tangshan Sanyou for 175,000 metric tons of Circulose to produce fibers for Levi’s and H&M, which has taken an 11.51 percent stake in Renewcell.

The company has also signed a letter of intent with Birla Cellulose to use 30,000 metric tons of Circulose annually.

The feedstock used to create Finland’s Spinnova fiber relies on materials such as wood, agricultural, and cotton waste, as well as discarded textiles. Spinnova’s technology creates a textile fiber that can be upcycled without harmful chemicals, and has a remarkable carbon footprint of -6.5 kg CO2e per kg fiber.

Spinnova grinds biomass feedstock into micro fibrils, which are transformed into a spinning-ready suspension. The suspension flows through a unique nozzle at high pressure, which rotates and aligns the fibrils as they are spun into filament. The fiber is then dried and collected for spinning into yarn.

In a joint venture with Brazilian pulp and paper company Suzano, Spinnova’s Woodspin fiber factory and in-house yarn spinning facility are due to be completed by end of year. Production is expected to scale to 1 million metric tons annually in ten to twelve years.

Spinnova is listed on the NASDAQ Helsinki.

What’s Happening in the U.S.

While collection and separation of textile waste has yet to be mandated in the U.S., smart money is looking to fiber-to-fiber recycling here as a necessary step towards circularity. Circ, a recycling start-up based in Danville, Virginia, stands out with its hydrothermal process that separates cotton and polyester fibers, the most common textile blend, into cellulose pulp and synthetic monomers.

The ability to separate mixed fiber blends is “a huge advantage in finding feedstock,” explains CEO and founder Peter Majeranowski. “A lot of waste comes from heavy users such as hotels and hospitals. We are agnostic as to the ratio of fiber blend and color.”

The cellulose is recycled into a variety of textile products, including lyocell; while the monomers are repolymerized to create polyester. The CO2e footprint for Circ’s process is “significantly better than that of virgin fiber,” says Majeranowski, with LCAs monitored as the company grows.

The company is partnering with Austria-based technology group Andritz, which specializes in pulp and paper, to advance Circ’s technology to commercial scale using Andritz’ engineering expertise and equipment.

Circ recently raised $30 million in a series B funding round, with investors including global retailer Inditex, and material science company Milliken. Early investors included Patagonia, Marubeni, and Fashion for Good. The company plans to establish a larger-scale facility, beginning with production of 65,000 tons, sometime mid-decade.

“Europe’s green policies, trialing household collection and sorting of textile waste, are leading the way. But people in the U.S. are watching closely, and we are not far behind,” says Majeranowski. “The more of us who can demonstrate the potential of fiber-to-fiber recycling, the more sorting and feedstock will come.”