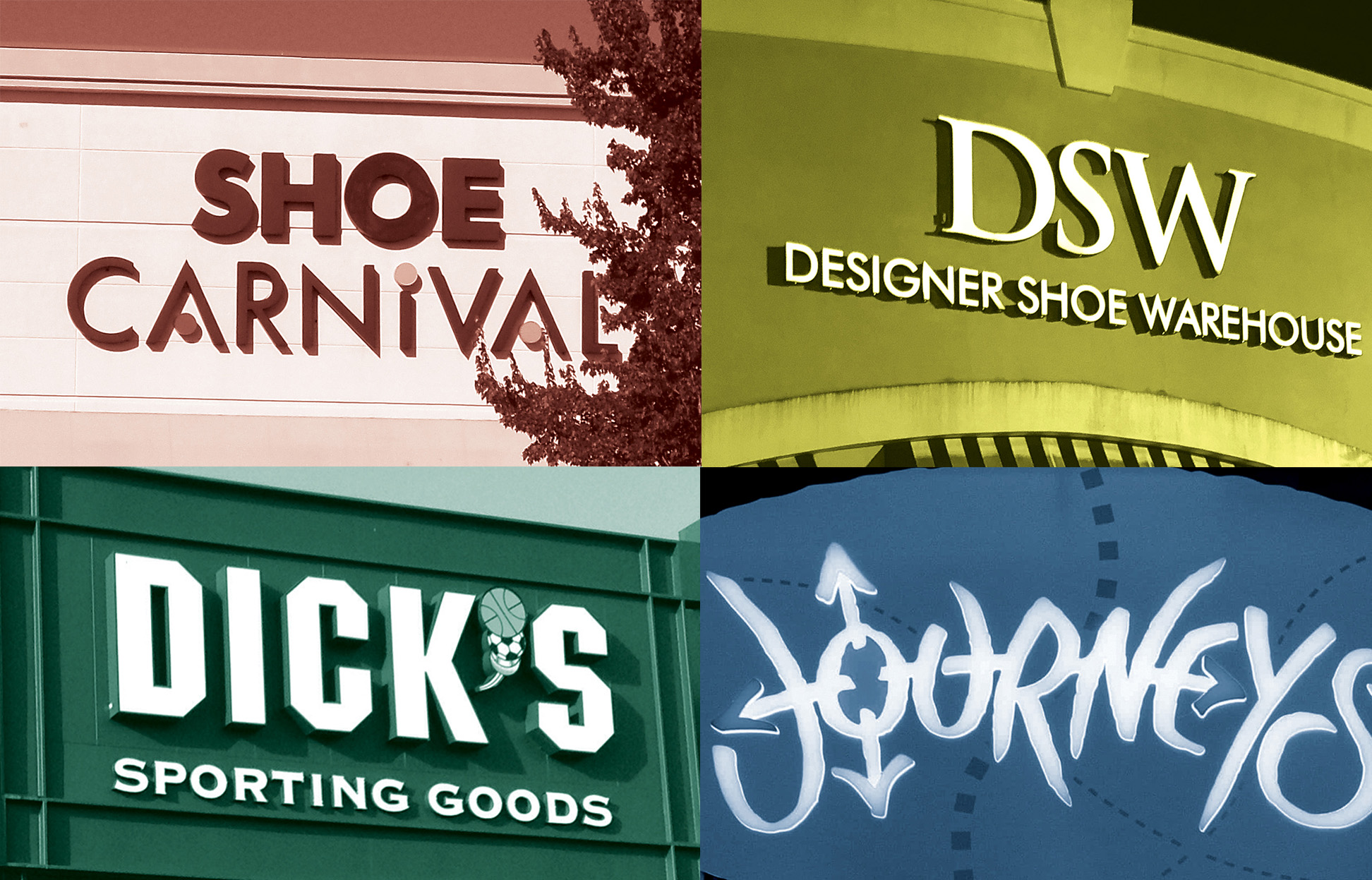 What’s trending at footwear retail chains across the country? Here’s a glimpse, of sorts, based on news of note from some of the industry’s biggest players.

What’s trending at footwear retail chains across the country? Here’s a glimpse, of sorts, based on news of note from some of the industry’s biggest players.

Faced with a lack of athletic inventory for weeks due to late deliveries, Shoe Carnival leaned on non-athletic footwear to bolster its results in Q2. The value-focused chain, which expects to operate 400 locations by year-end and have no store closures in 2022, reported a segment sales increase of more than 30 percent compared to Q2/19. Sales of women’s non-athletic, paced by dress and sandals, increased in the “high 20s” versus Q2/19; men’s non-athletic sales, bolstered by sell-throughs of dress, casual and boots, rose in “mid-20s” for the period ended July 30. Conversely, men’s, women’s and children’s athletic sales were down “low teens” compared to Q2/19.

Shoe Carnival senior management, which had expected “relatively flat” athletic sales in the period ahead of the Back-To-School season, called the segment’s performance and lower store traffic tied to inflationary concerns an “anomaly,” adding the flow of athletic products has already started to improve.

The retailer has been aggressively chasing the non-athletic business for over a year. It is forecasting continued growth from the segment in the second half as more consumers shift toward late ‘90s trends in casual and sport shoes—aggressive bottoms and combat lace-up boots, for example.

Meanwhile, the Shoe Carnival-owned retailer Shoe Station, a 21-door Southeast U.S.-based chain, is expected to grow to 30 doors by the end of FY23 and to 100 locations over the next five years. And at Shoe Carnival, more than 50 percent of stores will be modernized by the Summer of 2023 with the remainder scheduled for completion by end of FY24.

The Designer Brands-owned retailer DSW, which experienced a 40 percent year-over-year increase in sales of its own brands in Q2, is working with top branded partners to go narrower and deeper with their respective assortments. In Q2, DSW’s top 50 brands represented 80 percent of all revenues as their aggregate sales increased 20 percent year-over-year. On the own brands side, Designer Brands determined that six of its owned brands, including Kelly & Katie and Vince Camuto, would be part of its top 50 brands during the period based on market and internal data. DSW, beyond its historic strength in dress and fashion styles, is working to build its own athletic business through its recent investment in Le TIGRE and partnership with Reebok.

Starting last year, DSW made changes to its overall assortment to be more inclusive with athletic and kids footwear products. The retailer pointed out that sales within its Q2 kids business rose year-over-year despite the lack of Nike in its assortment. The retailer is also working diligently to rebuild its clearance footwear business, re-acquiring approximately two million clearance customers in H1 that resulted in a 5 percent year-over-year Q1 sales increase for the segment.

With all of its brand and segment maneuvering, Designer Brands is also working on strategies for the future that include opening a new format store for a test launch in Hedwig, TX, and testing shop-in-shop brand formats in existing doors.

Lauren Hobart, president and CEO of Dick’s Sporting Goods, the nation’s largest full-line sporting goods chain, said the retailer’s footwear segment today is really strong due to its best-in-class assortment that is connecting with customers. During its Q2 results call, Dick’s did not provide specific sales figures for the footwear category during the period, but said that overall net sales declined 5.0 percent year-over-year.

In footwear and apparel, Dick’s CFO Navdeep Gupta said the retailer’s current ranges are benefitting from higher margin rates and a lack of promotions due to the number of allocated products it currently sells.

“Footwear is doing incredibly well across the board,” Hobart said in response to an analyst question. “Nike is doing well. Other brands are doing well. So just in general, the quality of our assortment and the type of products we have is so meaningfully different than it was before that the business is really being responded to very well by consumers.”

Customers at Journeys, the Genesco-owned retailer, who were getting squeezed by inflation and trading down to more affordable price points in the second quarter ended July 30, are continuing to move their footwear preferences away from fashion athletic styles to more casual offerings.

“There is a re-interpretation of the ‘90s trends,” Mimi Vaughn, president and CEO of Genesco told analysts. “I’ve talked about even a little bit of the ‘80s (trends surfacing), and there just are a number of brands that are popular right now that are being substituted for sandals and other things as we saw through the summer.”

Journeys suffered some traffic weakness in the latter half of July that subsided into August as the back-to-school season picked up momentum. Still, the retailer improved its conversion rate and transaction size for those who did shop the banner with the metrics aided by higher average selling prices (ASPs). Comparable store sales declined 8 percent as total banner revenues dipped 7.2 percent to $321.3 million and operating income slide 70 percent to $9.2 million. While it exceeded pre-pandemic levels, Q2 gross margin fell on a return to a more normalized promotional environment, the company reported.

Genesco senior management says it remains “confident” in its footwear-focused strategy for the banner going forward. A large part of the initiative leans on maximizing the relationship between physical and digital channels and accelerating Journeys “off-mall strategy.” The company has opened five off-mall locations thus far with plans for 10 more by fiscal year end. The doors are larger than Journeys’ mall locations and can carry a full assortment of adults and children’s product. More than 25 off-mall leases have been signed to date.

All About the Run