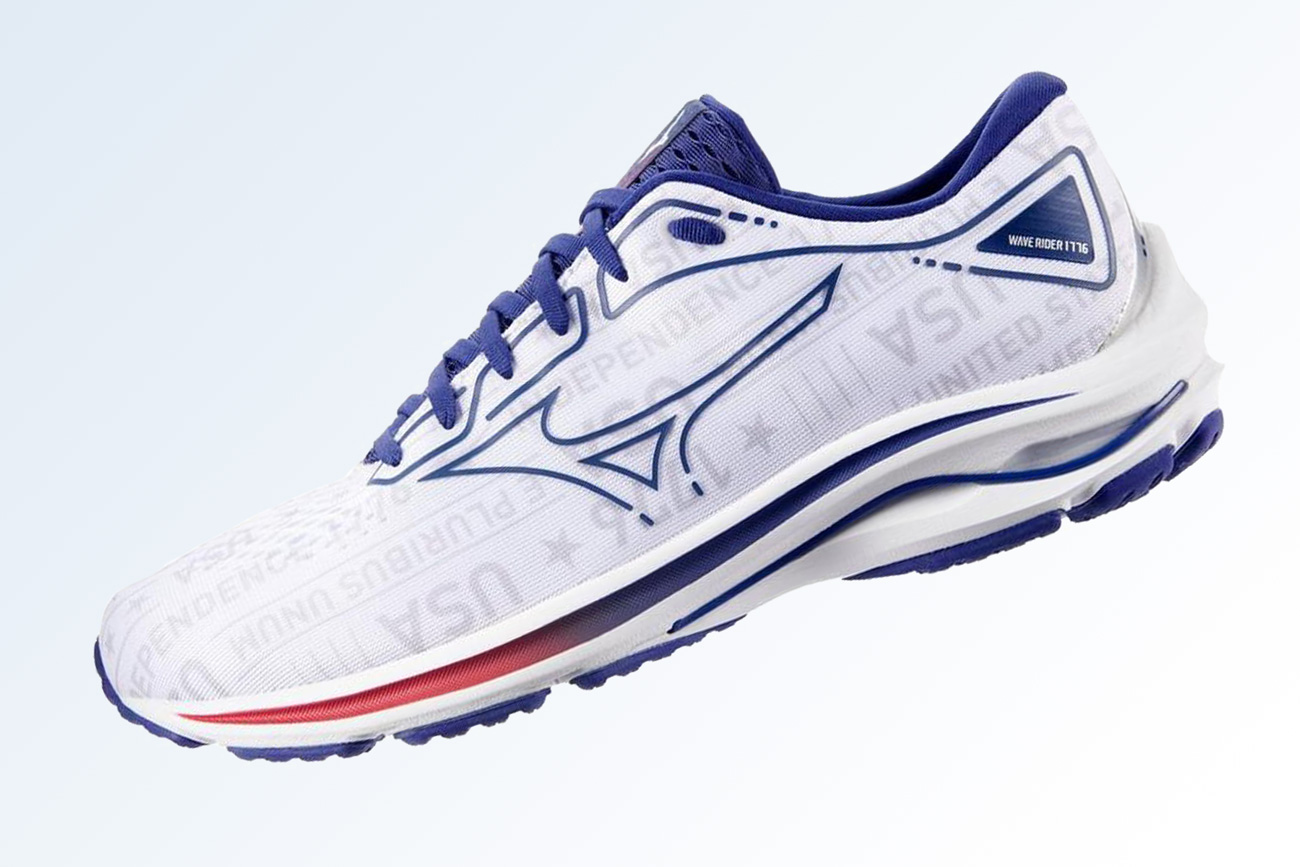 In the lead up to the in-person return of the 52nd running of the Atlanta Journal-Constitution Peachtree Road Race, Mizuno has released the limited-edition Peachtree 52nd Wave Rider running shoe. This year’s safe and socially distanced Peachtree road race will, for the first time, take place over two days, July 3-4, 2021.

In releasing the shoe, Mizuno also unveiled partnerships with Atlanta-based nonprofits, including the National Center for Civil and Humans Rights, Equality Foundation of Georgia and Shepherd Center. Mizuno will partner with these organizations and share personal stories of individuals from the BIPOC, LGBTQ, and People with Disabilities communities to further spread the message of equality and dignity for all.

As for the shoe, which retails for $135, it features several USA-themed elements as well as eco-friendly materials and the brand’s ENERZY technology, which delivers softness and energy return. The design of the shoe features the Constitution as a backdrop and color and design elements that represent the USA. On the upper are the words "USA", "1776", and "E Pluribus Unum” sublimated on the pattern of the engineered mesh. The stars and stripes are featured on the medial side of each foot.

‍Dick’s Sporting Goods is opening its second Dick’s House of Sport in Knoxville, TN and adding experiential in-store soccer shops in 47 more locations this month. And the retailer says more than 60 percent of its 731 doors will have premium full-service footwear departments by year-end. The chain opened the enhanced footwear department in 40 more stores in Q1 and will add another 50+ by year-end. The in-store soccer shops, meanwhile, feature “elevated” cleat/boot shops, soccer trial cages and an expanded selection of licensed jerseys. Additionally, later this year, the first two Public Lands outdoor omnichannel concept from Dick’s will debut.

“We’re in a great lane right now and 2021 will be our boldest and most transformational year in the company’s history,” DKS Executive Chairman and Chief Merchandising Officer Ed Stack said during the retailer’s Q1 earnings call last week. “We believe the future of retail is experiential, powered by technology and a world-class omnichannel operating model.”

With the summer Outdoor Retailer Show set for August 10-12 in Denver, show organizers last week released a list of 100-plus brands who will be at the show. Brands on board to attend include The North Face, Liberty Mountain, LOWA, Osprey Packs, Pendleton, Rab, GCI Outdoor, Kavu, and Wolverine, and more. On the retail side, show organizers report that more than 3,000 buyers are registered so far, representing Academy Sports + Outdoors, Alpine Shop, Canadian Tire, Dick’s Sporting Goods, Huckberry, JAX, Mountain Sports, Peace Surplus, Vail Resorts, Whole Earth Provision Co., and more.

‍JD Sports issued a formal statement yesterday refuting media reports that it is in the midst of recruiting a new CEO or Chairman to replace JD’s current Executive Chairman Peter Cowgill. In the company statement, Cowgill said he is looking forward to welcoming investors and analysts to the company’s second Capital Markets Day on Oct. 13. JD owns the Finish Line, Shoe Palace and DTLR Villa, which it acquired in January. The British company generated 29 percent, or an estimated $2.53 billion, of its global revenues in the U.S. during its FY20-21. U.S. retail market square footage rose 304 percent to 204,000 sq. ft. as total door count jumped to 49 locations from 11 the prior year.

DSW Will Continue to Sell Nike Through End of 2021