Everyone is paying attention to girls’ sports as 2021 unfolds.

Everyone is paying attention to girls’ sports as 2021 unfolds. 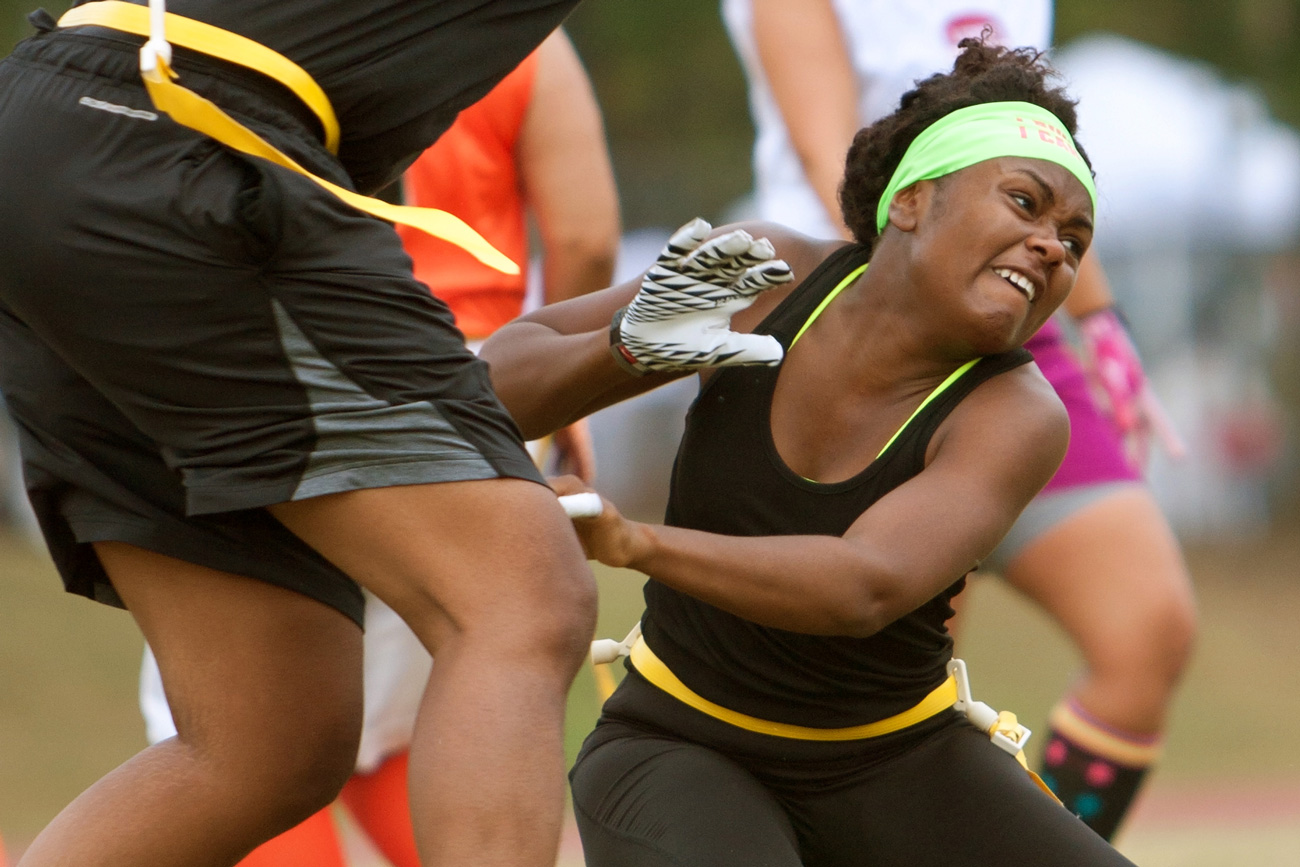 Nike and the National Football League are committing $5 million in product to help grow flag football within high school athletics. This multi-year initiative will provide a one-time donation of up to $100,000 in product to state athletic associations that offer girls’ flag football as a high school sport or demonstrate progress by way of a pilot program beginning in 2021.

Florida is the first to receive the grant  since it has promoted girls’ flag football for more than 10 years and is the home state of the Tampa Bay Buccaneers. Product will include flag football uniforms, socks and accessories such as sports bras, all of which will be distributed to each participating state’s governing interscholastic or athletic association at their discretion.

“The expansion of girls’ flag football is essential to the growth of the game and preservation of the values it has contributed to society for decades,” says Troy Vincent, NFL VP–football operations. “Girls’ flag demonstrates that football is for all and the greater the participation, the stronger the game, and the more young women can build the transferrable skills football provides for achieving success in life.”

Brine To Focus On Girls’ Lacrosse

In a move that both expands its reach into women’s lacrosse while solving an internal product conflict, Brine is rebranding itself exclusively as a women’s equipment manufacturer and will no longer make men’s lacrosse gear. Fittingly, it made the announcement on March 8, International Women’s Day.

Brine says the switch was due both to growth in the women’s game and an internal streamlining between Brine and its sister company Warrior, both owned by New Balance.

After several years of product conflict with Warrior, which New Balance purchased in 2007, Brine began to focus more on women’s lacrosse and decreasing its investment in the men’s side.

“Over the last several years, we’ve begun to focus Brine specifically on the women’s game,” Warrior Sports’ CEO Cindy Abbott told Sportico. “The idea for the final stage of this transition [started] during the early days of the pandemic as an opportunity to reinvent ourselves before a return to the field and to play. Warrior will be our brand for men and now Brine will be a brand for women. [We’re] differentiating ourselves in the market where most brands are playing in this space for both.”

Brine was the official equipment supplier of the Women’s Professional Lacrosse League during its two seasons. The league folded last fall in the wake of the COVID-19 pandemic and is now supporting Athletes Unlimited, a network of professional women’s sports leagues, that will debut its inaugural lacrosse season this summer.

“The expansion of girls’ flag football is essential to the growth of the game and preservation of the values it has contributed to society for decades.” — Troy Vincent, NFL VP

Guidance for the use of face masks was among the most significant rules change that will take effect with the 2021 high school field hockey season, according to the National Federation of State High School Associations (NFHS) Field Hockey Rules Committee.

Face masks were addressed as an addition to an existing rule that now permits field players to wear face masks throughout the game provided they are smooth, rounded, preferably transparent or single-colored and fit flush with the face. Players may not affix masks to hard, unyielding headgear – even if padded – and are prohibited from using them to endanger opposing players.

High school volleyball players no longer need approval to wear religious head coverings during matches, thanks to a 14-year-old Muslim player who inspired the rule change. The NFHS made the move after Najah Aqeel, a freshman at Valor Collegiate Prep in Nashville, TN, was disqualified from a volleyball match for wearing a hijab.

A referee refused to let her play, citing a rule that required athletes who wear a hijab to be granted authorization from the Tennessee Secondary School Athletic Association (TSSAA). Najah said she did not have authorization, but that it had not been an issue for previous matches.

Faced with the choice to remove her hijab or sit out the match, Najah decided not to play. Most Muslim women who wear the hijab only remove it in the presence of other women or immediate family members.

NFHS Volleyball Rule 4-1-6 stated: “Hair devices made of soft material and no more than three inches wide may be worn in the hair or on the head.” Because Najah’s hijab was much larger than the allowable three inches, the rule said she needed state association approval to play.

In October, NFHS approved a proposal for each sport rules committee to consider that would allow players to wear religious head coverings – unless deemed a safety risk to the wearer or other participants – without prior approval from state associations.

The volleyball committee was the first to meet in 2021 and promptly approved the proposal. Other sport rules committees will also consider the proposal. If adopted by all, it would impact most U.S. high school sports.

Girls’ headgear use remains voluntary for players at all levels of play. Only Florida currently requires headgear use for state sanctioned high school play.

Findings from a new research study measuring the effects of headgear in high school girls’ lacrosse indicate headgear is associated with a reduction in the magnitude of overall impacts, but not a change in the rate of impacts, how they occur or how penalties were administered for impacts sustained during competition.

The findings were recently published in The Orthopaedic Journal of Sports Medicine. The researchers monitored 49 high school players over the course of two seasons; one season with no headgear used and the second with headgear that met ASTM standard F3137.

All the players were from one high school in Virginia’s Prince William County and no concussions were diagnosed in either season. Wearable sensors synchronized with video verification were used to collect data.

In the published article, the authors note: “The use of lacrosse headgear was associated with a significant reduction in the magnitude of overall impacts sustained during game play. However, the clinical significance of this reduction remains unknown, as it was largely driven by body impacts, and we observed no such reduction in magnitude when examining only verified impacts directly striking the head.”

The ASTM headgear standard was developed to help reduce impact forces associated with stick and ball contact in women’s lacrosse. Approved in 2015, it was the first performance standard for women’s lacrosse headgear.

NFL official Sarah Thomas, 47, was not the only female making history at the Super Bowl in Tampa back in February. In addition to Thomas being the first female on-field game official in Super Bowl history, two members of the Tampa Bay Buccaneers coaching staff were history-making females — Lori Locust and Maral Javadifar.

It’s worth noting that during last year’s Super Bowl, Katie Sowers became the first female coach in the history of the Super Bowl as an offensive assistant for the San Francisco 49ers. Even though she didn’t receive a ring since her team lost that year, she was nonetheless delighted to see Locust and Javadifar make history in Tampa.

“Even though I have yet to win the big game, with these amazing women helping to lead the way, tonight I feel like we all won,” Sowers stated in a tweet soon after the Bucs won.

Leading up to this year’s Super Bowl, Tampa Bay head coach Bruce Arians spoke out in support of the idea of women working as coaches in the NFL.

“As far as the women, it was time,” Arians said. “It was time for that door to be knocked down and allow them because they’ve been putting in time and they’re very, very qualified.”

Also of note for women in sports: Locust and Javadifar were two of eight female coaches in the NFL during this past season.

One more thing: At this year’s Super Bowl, a female health care worker from the greater Tampa area, Suzie Dorner, actually flipped the coin prior to the game when the captains met at midfield with the head referee, Carl Cheffers.

As for Thomas, she has been officiating in the NFL since 2015. She officiated her first NFL playoff game in 2019. Back in 2009, she was the topic of a story in The New York Times, when she was the only female on-field official in the realms of major college football.

Finally, earlier this month the NFL added Maia Chaka to its roster of game officials for the 2021 season, marking the first time a Black woman has been added to the league’s officiating staff. “I am honored to be selected as an NFL official,” Chaka says. “But this moment is bigger than a personal accomplishment. It is an accomplishment for all women, my community and my culture.” — Mike May