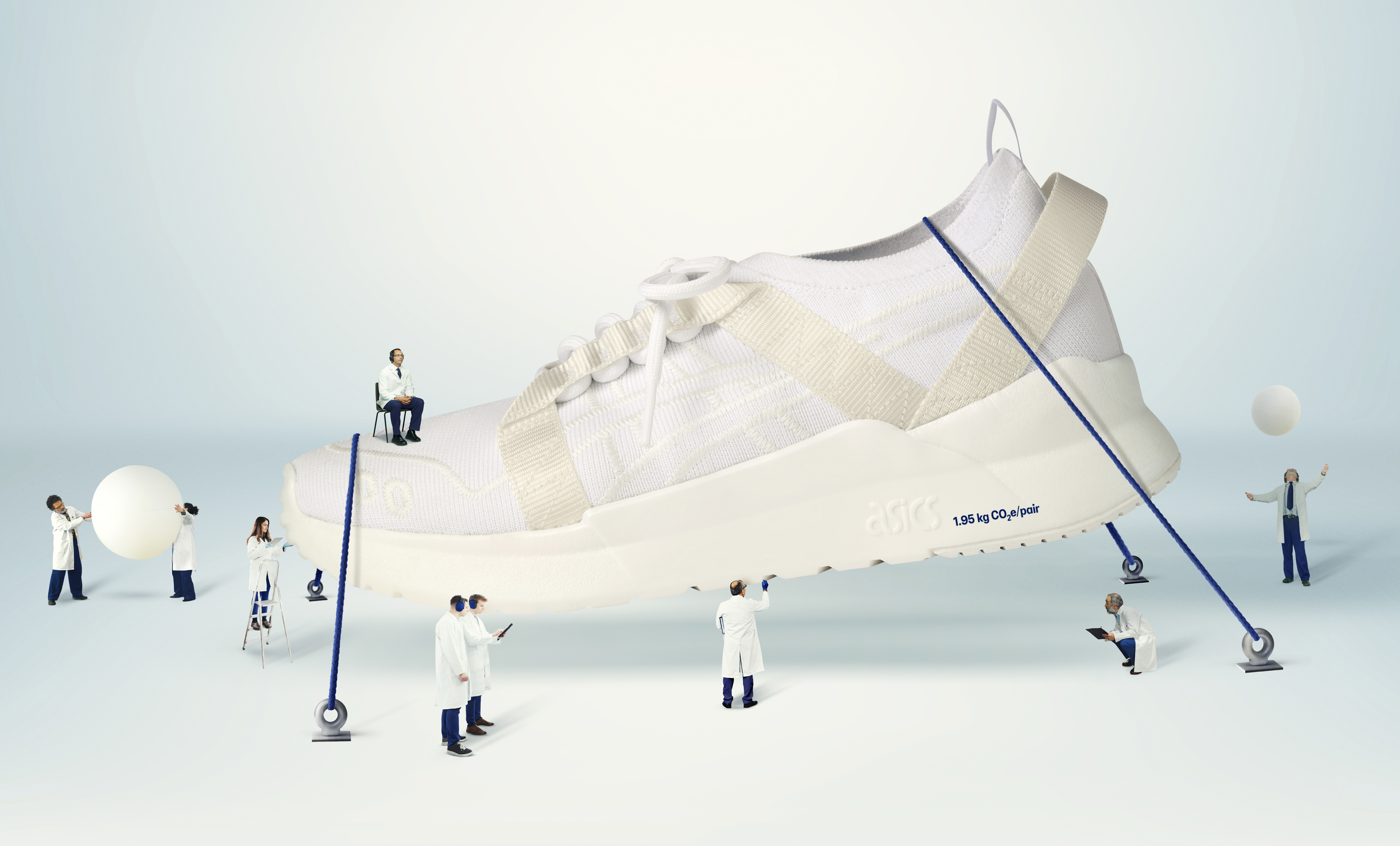 Next Level Innovation from ASICS

ASICS recently unveiled the new GEL-LYTE III CM 1.95 sneaker, which emits just 1.95kg CO2e across its life cycle, significantly lighter than the lowest CO2e sneakers currently available on the market*, according to the brand.

The new sneaker represents a significant leap forward by ASICS in its commitment to achieve net-zero emissions by 2050. The shoe is set to hit retail in Fall/Winter 2023. The exact price point for the shoe has not been announced yet, but expect the price to be comparable to the other GEL-Lyte III models in the ASICS lineup ($120-$170).

The brand says the GEL-LYTE III CM 1.95 is the result of over 10 years of research and development by ASICS, beginning when ASICS first partnered with the Massachusetts Institute of Technology (MIT) back in 2010 to find a better way to accurately measure the CO2e impact across the entire life cycle of a product.

Among the sneaker’s series of innovations is a new carbon negative foam, which features as part of its midsole and sockliner. Made from a fusion of bio-based polymers derived partly from sugarcane, these combine to deliver high-level comfort and quality in a sustainable way.

Other key design details in the shoe include the use of recycled and solution dyed polyester in the main upper material and the sockliner mesh, reflecting ASICS’ target of sourcing 100% of its polyester from recycled sources by 2030. The shoe features a new structure utilizing tape that enables less material usage, and 100% renewable energy used throughout the manufacturing phase.

Expect to see learnings from the shoe’s R&D process in other products moving forward. States Minako Yoshikawa, Senior General Manager, ASICS Sustainability Division, “While the GEL-LYTE III CM 1.95 is a hugely significant milestone on this jour-ney, this is only the beginning. Our ambition now is to continue applying the learnings and build on the blueprint of this shoe in a way that can be rolled out on an even bigger scale in the future.”

*(The claim is based on a calculation conducted by ASICS and validated by SGS (Société Générale de Surveillance) Japan, in accordance with ISO ISO14067 standard in August 2022. And it is based on available industry data for life cycle CO2e emissions as of Sep. 2022.)

Red Wing Heritage is bringing the concept of an “upcycled” collection to a different level with its limited “Same Old” collection that includes not only upcycled products, but an upcycled advertising and marketing campaign, as well. The fully upcycled “Same Old” campaign, launched this fall, celebrates the brand’s 100-plus year heritage with nothing new being created or released.

The “Same Old” campaign upcycles vintage ads and a limited collection of Red Wing’s archived products, giving both footwear and marketing ideas another lifecycle, and keeping boots on feet instead of in landfills. The “Same Old collection” consists of more than 50 upcycled products, including a mix of historic silhouettes from Red Wing’s archives, current in-line styles that have been broken in and worn, and vintage memorabilia and apparel. Standout footwear items include 1950s-era Original Irish Setter Sport Boots and Red Wing Heritage Huntsman Boots from 2015, which were originally released as a celebration of the company’s 110-year anniversary. Everything has been professionally cleaned, conditioned, and boots have been resoled (if needed).

Some of the commercials and print ads being used in the campaign were released as early as the 1960s.

Included in the Sustainable Capsule are the Gaia, Savannah and June.

Gaia is a mule, made with corn-based leather and BLOOM foam. It features a recycled hook and loop enclosure for ease and accessibility. Featured in the insole and outsole of the Gaia, Bloom uses repurposed Algae biomass harvested from freshwater sources, reducing the environmental footprint, without compromising on quality.

The Savannah slide is designed to be worn year-round, thanks to the breathable bamboo knit upper. It also features Bloom foam technology in the insole and outsole.

Fashionable meets breathable with LâMO’s June sandal. The lightweight style features a double strap upper with a hook and loop closure. And the breathable bamboo knit straps offer comfort alongside the Bloom foam technology in the insole and outsole.