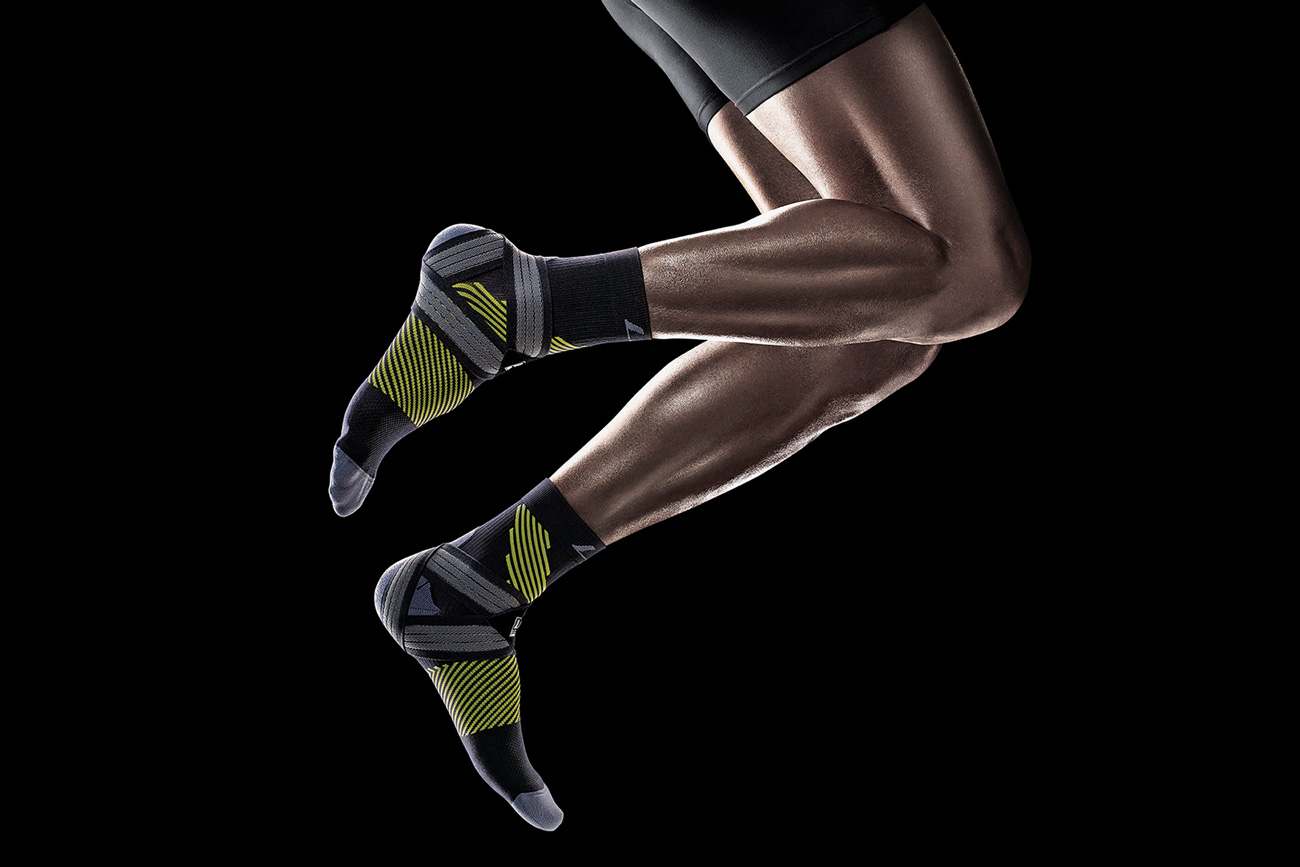 With a Double-loop stabilizer as a heel strap to support ligaments of the heel and ankle during jumps and shifting movements, LP Supports ankle compression socks also feature Power band wraps around the ankle to prevent roll during lateral movement.

Simple is better as demand for team socks turns to the basics in uncertain times.

Simple is better as demand for team socks turns to the basics in uncertain times.

With a Double-loop stabilizer as a heel strap to support ligaments of the heel and ankle during jumps and shifting movements, LP Supports ankle compression socks also feature Power band wraps around the ankle to prevent roll during lateral movement.
July 13, 2021
By
Carly Russo
&
No items found.
July
2021
Issue
Newsletter
Share:

Never have socks been more important in the world of team sports — not because navigating the ever-changing landscape brought on by COVID-19 has been so difficult, but because this simple staple of a player’s uniform seems to offer a sense of stability and reliability. Plus the sock vendors to the team business have proven to be just as stable and reliable at a time when dealers are relying more than ever on reliability in unprecedented times.

Uncertain schedules, COVID-mandated shutdowns and fluctuating team sizes have led to late ordering and frequent changes, challenges that team dealers are ideally suited to handle. They are able to do so because sock supply – more stock than custom in the past season or two – is one area they don’t have to worry about.

As the business enters the second year of the pandemic, and while some regions are playing ball as others still don’t know when they will see their first full season, custom socks have taken a backseat to solid socks as teams continue playing it safe with their orders. Again, that plays right into the hands – or feet, as it were – of team dealers and their sock vendors.

“The demand is down for custom socks, people are just keeping it simple,” says Chris Williams, owner of Minden Athletic Supply, Minden, LA. For teams everywhere, “keeping it simple” is the norm this year as states re-open at their own pace. The constantly changing COVID-19 guidelines make it nearly impossible for dealers to predict the demand for upcoming seasons, which means orders need to be placed and filled quickly as guidelines are updated on a continual basis.

For some, keeping a well-stocked inventory has been the saving grace. Although sales at sporting goods stores slowed down all over the country, some dealers have been fortunate to maintain a reliable stock, enabling them to fulfill orders as restrictions change seemingly overnight.

“Our business is booming, it’s flourishing,” says Todd Dunaway, owner of Sport and Cycle, Fortuna, CA. In California the opportunity for a Spring baseball season was missed in most parts, but the future looks bright as restrictions lessen in several counties and teams rapidly place orders for the summer and fall.

Once schools get the green light to host recreational activities, the excitement of resuming sports leaves teams with barely any time to think about custom socks. In a hurry to put together a uniform and prepare for the first game, sports programs are relying on team dealers to get them solid-colored socks as soon as possible.

“I’m not complaining about high demand. We must’ve had enough socks in our inventory to fill it,” says Dunaway. Although filling team sock orders is no issue, the need for custom socks at local schools has lessened despite the sudden increase in sales.

While many states have reopened almost totally and others such as California are feeling a glimmer of hope that their next sports season is just around the corner, many still can’t seem to find the light at the end of the dugout. As a result, dealers in those still-heavily restricted areas haven’t felt the need to stock new equipment or apparel in over a year since most of their schools are holding onto unused gear from the previous spring. Patiently waiting to wear their practically untouched uniforms, teams have little incentive to place new sock orders.

Since last March, Michigan tried to have a Fall season in 2020, but has reverted back into a stricter lockdown, says Reynolds. “Fall sports came back, but it was totally bleak. We only did one-third of our usual Fall business.”

With no idea what to expect next, ordering for Fall 2021 poses a real challenge for Reynolds and other dealers in Michigan. “I’m not going to buy stuff and sit on it,” he says.

Because schools have little reason to buy custom socks, Reynolds reports that most athletic programs are sticking to solid socks in hopes of having an upcoming season. Ordering custom socks feels unnecessary to teams when there’s no guarantee of anything. “What this year is going to entail, I just don’t know,” he says.

Custom socks may have been put on the back burner by teams across the country, but that doesn’t mean demand for simple-colored socks made for simple order processing times. Amidst the ups and downs of the past year, some dealers are still constantly turning over inventory but are suffering from supplier delays — causing orders to be long overdue.

“Suppliers can’t fill orders. I still have backorders from six months ago,” reports Jeff Covington, owner of Sports Spectrum in Chattanooga, TN, a state that was fortunate to be able to hold a Fall 2020 and Winter and Spring 2021 seasons, which means demand for team apparel remained strong.

“Socks did not escape COVID,” says Covington, who couldn’t keep black and white socks on the shelves as teams purchased the most basic socks they could get their feet on. Maintaining a consistent stock during basketball season was hard for Covington since those were the only colors teams were reaching for.

With the much-needed support from parents, booster clubs and fundraisers, sports programs have been able to get the necessary funding to buy uniforms and play ball. “Tennessee’s re-opening for sports was full-throttle and parents were ready to spend money on sports gear where schools couldn’t,” says Covington.

The only thing that slowed them down were back orders, which Covington says is going to make it difficult to forecast the demand for upcoming seasons. “We were fortunate to have a good season,” he says. “I do have concerns for Fall 2021 that supply chains can’t keep up with the demand.”

Chattanooga isn’t the only area waiting on suppliers to get teams their socks. Although a busy season has upped the need for uniforms, those in areas experiencing more severe restrictions are struggling to receive small-scale shipments as well.

“Reliability’s been a problem and inventory’s been a problem,” reports Dan McNamara, owner of McNamara Sports Center, Merced, CA. Unlike Dunaway in a different part of the state that began alleviating COVID restrictions, McNamara’s territory still shows no signs of getting teams back on the field. However, slow demand doesn’t mean sluggish shipments are a non-issue from suppliers. McNamara says he often spends more time dealing with delays than he would like to even when the orders aren’t pouring in.

The same goes for Reynolds, even though teams aren’t playing in Michigan. He, too says delivery has been unsatisfactory for all product categories. “There are a lot of holes in a lot of areas on getting shipments and there’s not one manufacturer I know not dealing with that,” he says.

Handling supply issues has definitely made an already tough year even more stressful on team dealers, but on the bright side online sales – a particularly strong area for socks – are helping to carry them through. In Chattanooga, Covington says recreation programs have been buying socks in bulk from the web to outfit their teams.

Williams also reports that even though teams in his territory didn’t play any sports for more than a few weeks before calling the season a year ago, the demand for socks from his online stores remains even. With custom socks out of the picture for the foreseeable future, ordering online provides an easy solution for players to get their solid-colored socks on time.

Whereas custom design trends are usually the focus of suppliers in planning for future seasons, this year it’s all about whether or not there will be a season.

Talk of color, fonts and logos has gone out the window — simply getting a uniform together has taken precedence and design trends are less of a topic of discussion for dealers and teams who are settling for ordinary in a time that’s anything but that.

In 2021, keeping it solid means keeping it safe as teams hold onto hope that sports will return to normal by next year.

The only certainty is that players will need uniforms no matter what — and the socks that go with them. Whether they need solid or custom, team dealers and their vendors will still be there to supply the demand. After all, players can’t gear up without a good pair of socks, which is a sentiment that still rings true for athletes everywhere.

“Socks are essential to the uniform,” sums up Covington.