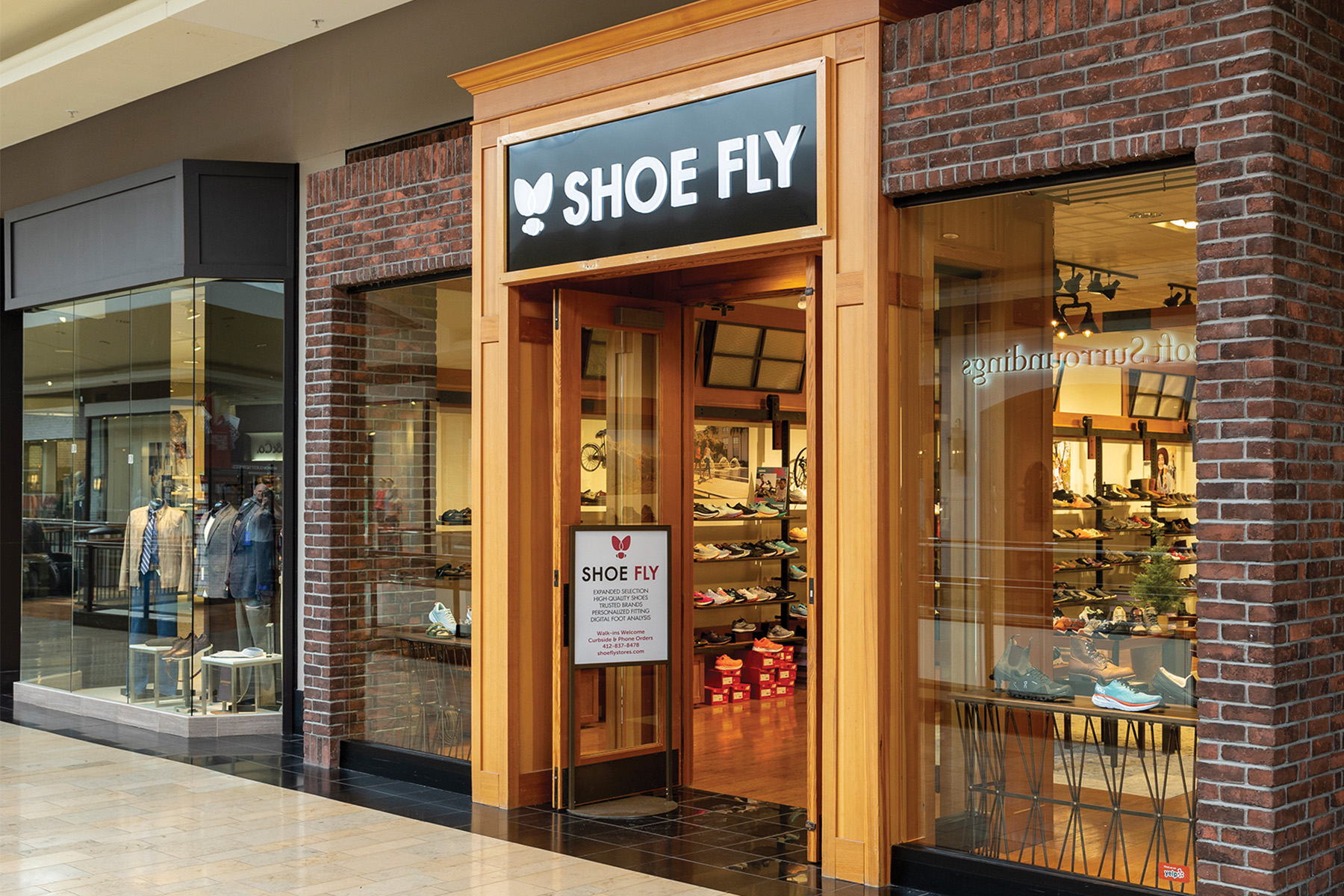 The term “Shoe Fly” has been in the vernacular of most Pennsylvanians since the invention of the sticky, molasses-based pie in 1876. But it took on added significance for citizens from Pittsburgh to York, PA in 1999. That’s the year that the independent chain, Shoe Fly Shoe, Inc. was born.

In the 23 years since, Shoe Fly retail lore has grown across the Keystone State as the business has expanded through the acquisition of two independent family shoe businesses, the conversion of two former New Balance stores, the 2019 purchase and expansion of the Appalachian Running Company (App Run Co.), and the addition of two “Work Zone” concept stores adjacent to Shoe Fly doors.

“Our stores are, by and large, in conservative areas,” says Todd Lewis, president of the parent company, which now manages 11 Shoe Fly stores, seven in Pennsylvania and two in both Maryland (Frederick and Rockville) and Virginia (Charlottesville and McLean), four App Run Co. stores and the Work Zone doors. “I would say our shoes have to bring value. We don’t have a luxury (shoe) business or (an assortment) targeting the affluent.”

Cliché or not, the heart and soul of Shoe Fly are its ties to independent family shoe stores and its dedication and focus on the full-service ‘sit and fit’ experience when so many rivals are chasing more impersonal ecommerce sales today. The company hasn’t ruled out taking part of its business online, but it’s not a “high priority” today.

“Our best strategy is to make sure your in-store experience is worth getting off the couch and driving 20 miles for,” commented Lewis.

In late May 2021 when Shoe Fly acquired the third-generation Gordon’s Shoes in Homestead, PA, outgoing owner Chuck Gordon told the Pittsburgh Jewish Chronicle that Shoe’s Fly’s owners “have the same family values I do, and customers will still be serviced with the same staff they’ve always had.”

Lewis, a 1991 Penn State grad, and a National Shoe Retailers Association (NRSA) board member since 2004, knows more than a thing or two about the independent, family-owned business. In his first year of college, he began working for Morris Levine Family Shoe in Tyrone, PA and has never left the building, purchasing the business two years later at age 19. Today, 36 years later, the store there has been relocated to nearby Altoona under the Shoe Fly banner and the Tyrone building now houses Shoe Fly Shoe’s corporate offices.

Five of the six owner-partners of Shoe Fly grew up working in shoe stores, managing a shoe retail operation, or working in one, Lewis proudly proclaims. The ownership group includes the father-son tandem of Greg and Mark Wagner. Greg Wagner is the chairman of Shoe Fly Shoes and the president of Wagner Quality Shoes in Lawrenceville and Monroeville, PA. George Gripp and Charles Biddle, the fourth and fifth Shoe Fly Shoe partners, also have ties to independent shoe stores as younger men. IT and graphic arts specialist Russ Buchmann is the sixth partner in the business.

Like many retailers at the start of the COVID-19 pandemic in March 2020, the Shoe Fly stores that average 6,000-sq. ft. were forced to go dark for weeks before opening by appointment only. But the business also faced a unique challenge at the time. Shoe Fly had only recently changed its point-of-sale system for the first time in 25 years and began implementing the Imagine POS that month. Lewis said the retail closures gave Shoe Fly’s buying staff and internal team additional time to familiarize themselves with program.

“Imagine is the perfect system for the future for us,” says Lewis, “since it allows us to move inventory very fluidly from one store to another.”

While it has no ecommerce business to speak of today, Shoe Fly has utilized a warehouse since 2020 and stocked it with a door’s worth of inventory.

With children’s cited as a “particularly challenging” part of its business due to an inability to secure the proper volume and assortment of products, Shoe Fly also hasn’t seen its classic casual business yet return to pre-pandemic sales levels. But the athletic segment has grown to more than 50 percent of its total merchandise mix. Performance running styles are largely assigned to the 2,500-sq. ft. App Run Co. doors with other category silhouettes dedicated to the Shoe Fly assortment.

“We really are trying to increase our credibility with the athletic consumer,” says Lewis. “In our Appalachian Running Company stores, we are seeking to hire and develop running enthusiasts.”

Since the pandemic, Shoe Fly has increased its SKU count with its athletics business largely generated by the likes of Brooks, Hoka, New Balance, On, Saucony, Altra, Asics, Nike, Keen, Merrell, Oboz and Feetures. Despite broad inflationary concerns in the U.S., price increases have yet to become an issue with Shoe Fly customers, many of whom live in rural, industrial Pennsylvania.

“We’ve had a rather surprising shift,” hinted Lewis. “For the first time in 25 years, our top vendor is now our number two vendor. New Balance was number one for 25 years but in the first quarter of 2022, Hoka surpassed them. Because of supply issues, New Balance really gave up that top spot. It wasn’t that we chose to stop selling them. They just couldn’t supply the demand and that demand was met by their competitor.”

Besides Hoka, the Shoe Fly president cited Saucony and Brooks as “stepping it up” when inventory could not be secured from other brands.

“I think that most vendors today are hesitant to really promise or overpromise on deliveries,” added Lewis. “And I think to a certain extent, the uncertainty in the supply chain has probably helped those vendors a little bit in that when they can’t promise fill-in goods, we (retailers) need to order more, we need to write back-ups, and we need to get the orders in earlier.”

Shoe Fly has its 2022 Back-to-School orders in. But after two consecutive “challenging” B-T-S seasons, Lewis remains uncertain on what to expect this year given the persistent supply chain issues for some.

“If the (B-T-S) products show up a month late, we’ve missed a big part of the season,” Lewis said.

In the work/service footwear area, Shoe Fly abandoned its mobile vehicle approach in 2021 after two decades following the retirement of its full-time manager on wheels. Now, the chain makes deliveries by vans and sets up in-person displays at hospital cafeterias, nursing homes and factory breakrooms. Shoe Fly regularly reaches out to factories and business that are 20 to 30 miles from one of its locations.

Firmly planted across Pennsylvania and into the Mid-Atlantic states of Virginia and Maryland, Shoe Fly’s objectives for 2022 include improving the sales performance at some of its existing doors, adding new App Run Co. stores in Erie and Camp Hill, PA and continuing to keep its eyes open for regional acquisition candidates, preferably family-owned, independent footwear operations with the same operational values that have kept it buzzing along for years.