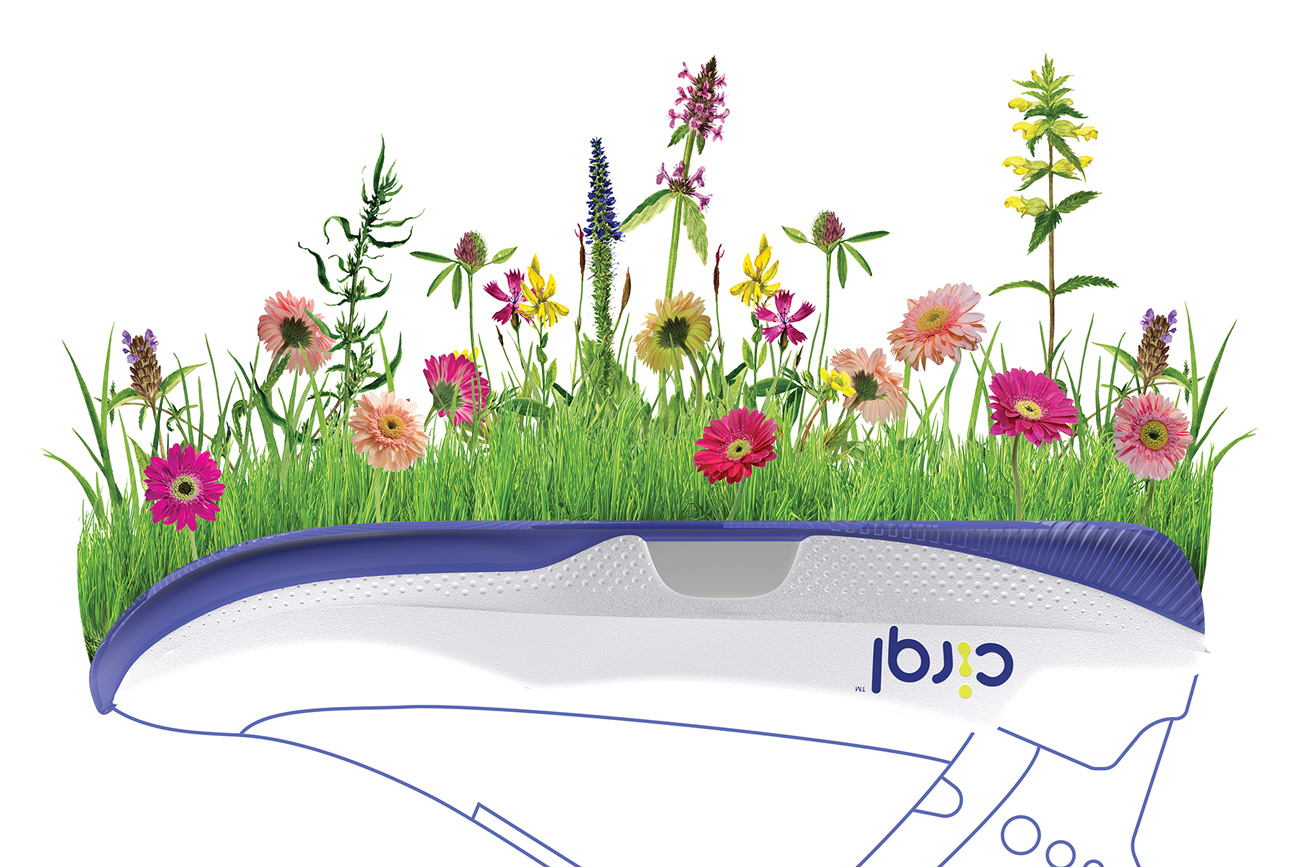 Yesterday, OrthoLite officially introduced Cirql, the industry's first EVA plastics-free, recyclable and compostable midsole foam with an end of life solution. It is the first-ever midsole foam innovation from OrthoLite.

With the launch of Cirql, OrthoLite is not only branching out from insoles into midsole components, but is doing so with an innovation that it believes offers a critical solution needed to achieve true circularity within the footwear industry. An industrially compostable foam made from responsibly-sourced plants and biodegradable materials, Cirql offers a pure foam alternative to conventional plastics.

Known as the industry leader in OEM insoles — Amherst, MA-based OrthoLite, which is celebrating 25 years in business this year, has its open cell insole foam technology in more than 500 million shoes each year across all categories. The company’s leap into midsole technology is one that brands and partners have been requesting from OrthoLite for years, said Glenn Barrett, OrthoLite founder and CEO. “If we were going to introduce our first midsole foam, we were going to do it right,” he said. In formulating the concept of Cirql, the OrthoLite team focused on offering sustainable, end of life solutions and started from there, moving towards the goal of making a truly sustainable footwear future within reach, he said.

The GMO-free, plant-based material utilized in Cirql is free from any “forever chemicals,” and is created through a zero-waste, chemical-free foaming process. OrthoLite stresses that in addition to unmatched sustainability in a midsole, Cirql also delivers on OrthoLite’s highest standards of performance, comfort, and sustainability. Cirql can be industrially composted, making it the first ever, soil-to-soil solution for footwear foam. Cirql effectively biodegrades back into nutrient-rich, soil compost. Additionally, Cirql foam is able to be depolymerized and recycled for reuse.

“At OrthoLite, operating sustainably has been central to our DNA since our inception 25 years ago, and Cirql represents our continued commitment to this effort and a natural extension of our mission and vision,” said Barrett. “Worldwide footwear production has increased by over 20% since 2010 with no signs of slowing down. As an industry, the onus is on all of us to help mitigate our environmental impact on the planet. It’s going to take an industry wide commitment and a concerted effort, and Cirql is a major step in that direction.”

Rob Falken, VP Global Innovation at OrthoLite, described Cirql as a “sea change” and noted that unlike many other sustainability initiatives, Cirql is “scalable.” Globally, there are more than 20 billion pairs of shoes made each year, most of which use conventional plastic and foams, which perform well, but damage the environment with a “persistent plastic” problem contributing to pollution and waste in soils and waterways. Cirql is being built to be a solution at scale, not just for a thousand units, but to make a dent in that 20 billion pairs of shoes each year, offering brands a better sustainability option for the industry in both the manufacturing and end of life stages, explained Falken.

OrthoLite execs did not reveal any brand partners for the Cirql midsole foam yet, but said that now that Cirql has been officially unveiled, it will work with brands and factories to initiate development in 2023. That timeline could potentially move up depending on developments and demand in the coming months. Cirql is an option across all footwear categories. Brands who do sign on with Cirql will likely each have their own “take back” programs for the footwear’s end of life solution.

Cirql is headquartered in Ho Chi Minh City, Vietnam, and led by GM and Cirql VP Matt Smith, a 21-year footwear industry veteran who has built the Cirql division from the ground up, leading production direction, and establishing and managing partner relationships. OrthoLite believes that the flagship Cirql factory, the Cirql Center of Excellence, is a model for evolving toward a zero-waste production process and end of life product solutions. “The model can be used as a template for footwear brands and their Tier 1 factory partners to move away from traditional foam materials and processes and into a new era for sustainable footwear manufacturing,” said Smith.