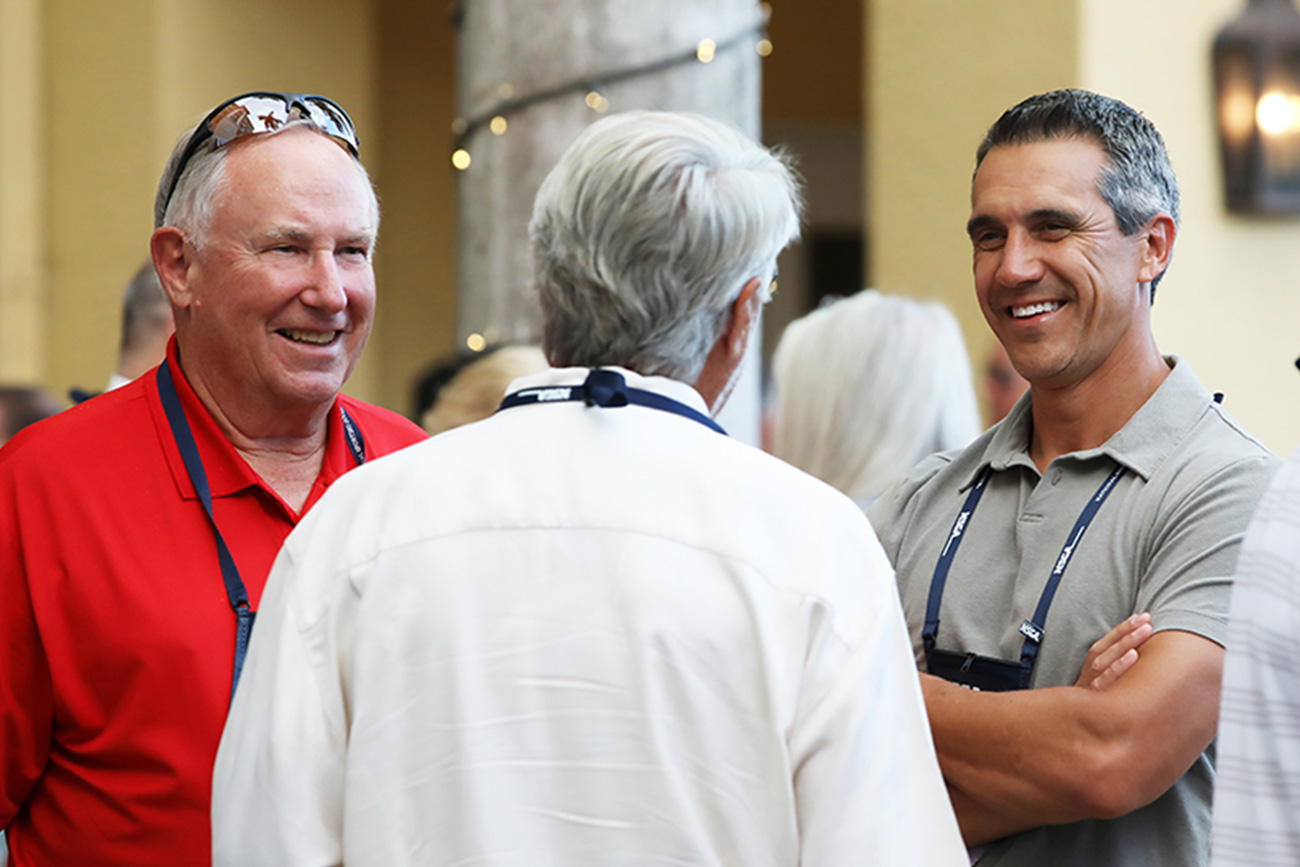 Networking at the Opening Night reception are (from left) Steve Hauff, Jim Hoff and Dusty Rhodes.

For the 30th time – I know, I don’t look that old – I had the pleasure of attending the National Sporting Goods Association (NSGA) Management Conference and Team Dealer Summit, held in late September in Naples, FL. Like many events in the past 20 months it was twice-postponed – the 2020 event fell victim to COVID restrictions and the 2021 gathering was moved from its traditional May slot to the fall – but in the end, worth waiting for.

I admit it was my first foray on the road since COVID changed everything in March, 2020, and I wasn’t exactly thrilled about flying to Florida as the Delta variant continued to rage, but ultimately I decided it was time to take the leap and get out there to actually meet people face to face.

I’m glad I went. People ask me how it was and my response has been that while there were certainly fewer attendees than in the past, there were more than I thought there would be given that many companies were still limiting travel and the Conference had to be moved out of its regular slot in the travel schedule. Indeed, one of my main reasons for making the trek to southwest Florida – in addition to wanting to support the sporting goods industry – was to see who showed up.

And people did show up – not enough full-line retailers, but Dunham’s, Kittery Trading Post, Frank’s Sport Shop and the revamped and renamed SV Sports (formerly Schuylkill Valley Sporting Goods, and now I never have to spell “Schuylkill” again) were there. Notable by their absence was anyone from Hibbett, which has always been a big supporter of the event by apparently had other things to do that week; maybe they were too busy changing the signs on their stores to their new identity (in case you missed it, they got rid of the “Sports” in their name, for some reason).

There was, however, an impressive representation of team dealers, including NSGA chairman Pat Donnelly, of Donnelly Sporting Goods, and Hall of Famer Larry Aasheim, of Universal Sporting Goods; and a whole slew of team sports vendors, including Conference sponsors Mueller Sports Medicine and PROLook Sports. And one independent rep, Don Leonard, of Crown Sports. No one from BSN Sports, though.

‍I have the pleasure of serving on the Sporting Goods Hall of Fame Committee, which operates under the guidance of NSGA and meets to select the next class of inductees every year at the Conference. That is always one of my favorite two hours of the event because the years of experience represented in that room lead to some honest and impressive give and take on nominees. The Class of 2022, to be inducted at the next Conference in Arizona in May, 2022, includes … Hah, you thought I was going to spill the beans. Not me, we are sworn to secrecy until the official announcement later this year.

But a few other observations:

So it’s been 30 years since my first NSGA Management Conference, when I was just a not-so-young editor at the now-defunct Sporting Goods Dealer and I couldn’t tell the difference between Don Pfau and Don Sonandres. The industry has changed a lot in those three decades – as have I and my magazines – but it is good to see us all back together for a short time after all we have gone through.

See you on the road soon.