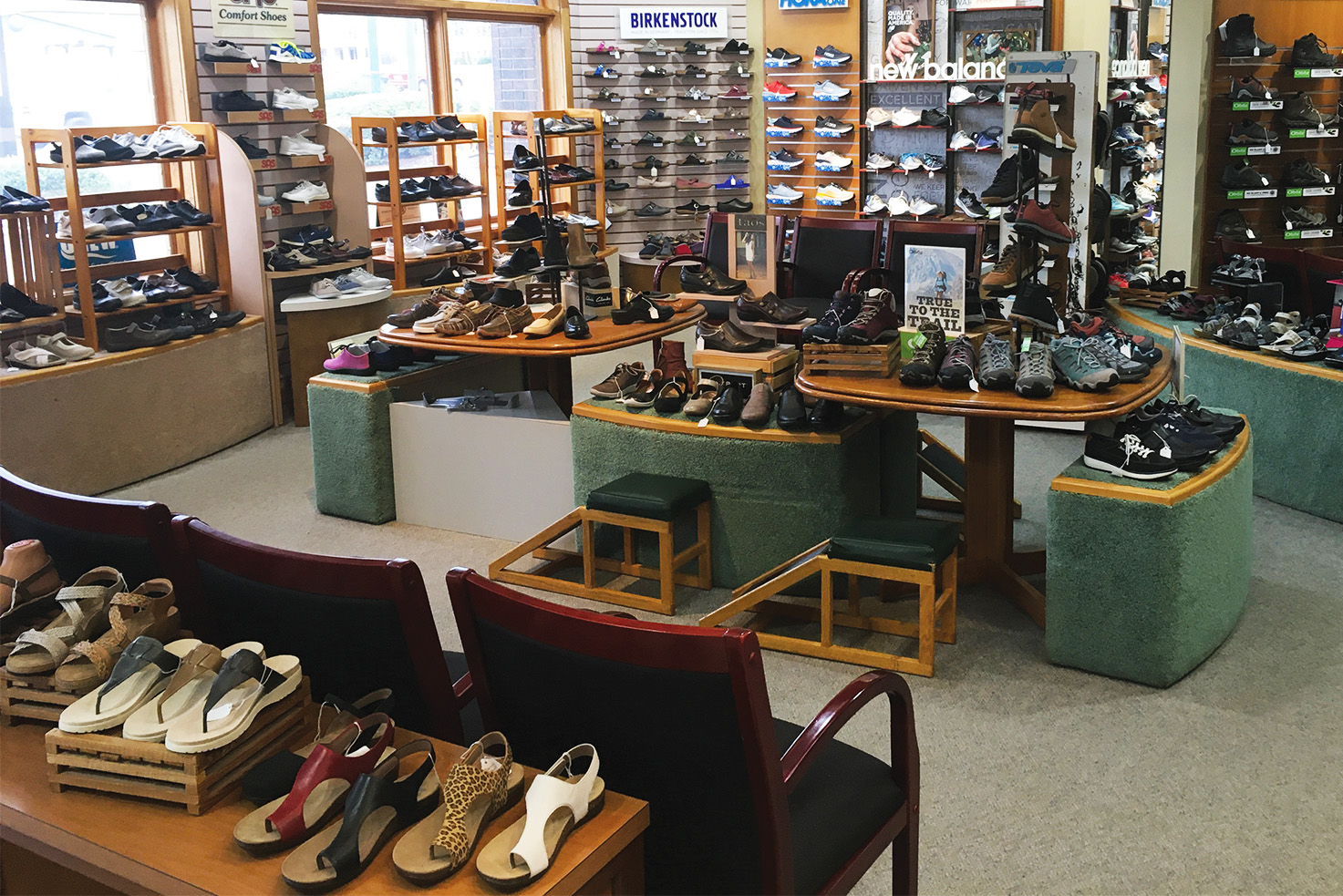 Comfort shoe offerings all around at Roderer Shoes, Inc.

Orville and Wilbur Wright, the aviation pioneers, have long been associated with Dayton, OH, given the city on the Miami River in Southwest Ohio is their birthplace. But the flying Wright brothers were not the only family name to emerge in the Gem City at the start of the 20th century. Three years after the Wrights successfully conducted the first free, controlled flight of a power-driven airplane in Dec. 1903, George Roderer Sr., a shoemaker, Prussian immigrant and father of nine opened the first Roderer family shoe store on the corner of Xenia Avenue and Dover Street. He had immigrated to Ohio in the 1880s with three brothers, landing a job at the 1884-founded National Cash Register (NCR) company where he would often wear home a colleague’s shoes to repair them. The financial success of that side hustle inspired George to open his own shoe store in 1906, aptly called Roderer Shoes.

Fifteen years later in 1921, George’s brother John, also a father of nine, opened a competing shoe shop a block away with the same Roderer Shoes nameplate. The dueling siblings, which were affectionately known as ‘Big Roderer’ and ‘Little Roderer’ by locales, also faced competition from an unspecified relative, Anthony Roderer, who also operated a Dayton shoe store at the time, according to Dayton’s 1922 city directory.

The retail rivalry between two brothers commenced ten decades and five generations of Roderer Family ownership of independent shoe retail shops in the Buckeye State’s sixth largest city that spawned as many as nine Roderer nameplates at one time as various descendants of George Sr. decided to try their hand in the retail footwear business. While there was at least one instance where a single Roderer owned more than one location, these ventures were largely single-door, unaffiliated operations. They have operated, survived and even thrived through the 1913 Great Dayton Flood, two World Wars, two armed robberies, a 2019 Memorial Day Weekend F4 tornado that wiped out a downtown neighborhood and a two-year pandemic that forced a multi-month shutdowns and a move to appointment-only shopping.

Today, there are two Roderer Family-owned shoe stores in operation in this metro area, some 45 miles north of Cincinnati and 65 miles west of state capital Columbus, owned by 4th- and 5th-generation descendants of George Roderer Sr. One is called Roderer Shoes Inc. and the other is Roderer Shoe Center.

Mike Roderer, along with wife, Denise who serves as bookkeeper, and daughter, Rebecca, who works the store part-time when not teaching school, are the principals at the freestanding, 5,000-sq.-ft. Roderer Shoes, Inc. on North Main Street on Dayton’s north side. Cousin Dan Roderer, 73, a former road shoe sales representative and the family historian, also pitches in. Meanwhile, brother and sister Chris and Emily Roderer operate the Roderer Shoe Center in a strip center on the south side of town.

While the two independent Roderer retail operations are autonomous, their separate existences can create some confusion among Dayton shoe consumers. They will refer customers to each other in an out-of-stock situation, but that’s about all they share.

We spoke with Mike Roderer about the past and present of his family’s footwear business.

“Grandpa used to tell us that the shoe business is recession proof,” remembers Mike Roderer, a fourth-generation Roderer who became sole owner of the Roderer Shoes Inc. store six years ago following the passing of his dad, Tom Roderer, who he fondly remembers as a “humble, nice guy,” and not a “cutthroat businessman” who instilled a caring, strong work ethic and an old school approach upon his family. Mike recalls the store “loading up” with inventory during World War II since Americans were issued coupons to buy shoes back then, and his dad and grandfather often sending out pairs of shoes to families with a simple message attached, “Pay when you can.”

In the early 1950s, when many of his contemporaries thought he was crazy, Tom Roderer, capitalizing on a then-tight relationship with Buster Brown executives, opened a kids-only store in Dayton.

The secret to Roderer’s success and longevity in the independent shoe retail business in metropolitan Dayton, whose population is just over 814,000, boils down to a ‘very old school’ approach focused on one-on-one selling, a sit and fit experience, a loyal customer base and a low overhead given the family owns the store’s building. To this day, the North Main Street store still keeps all customer purchases on a file card.

“We don’t chase trends and we don’t have cutting-edge technology. We have old school values and old school ideas about measuring and fitting customers,” reminds Mike, who employs five full-timers and 5-6 part-timers, but says he is always “challenged” in finding people with the proper skills willing to take an open store position. There is always nagging worry given the advice he was given by a friend a few years back: “You spend more time working in your business than on your business.”

“Last year (2021), we had our best year in a decade, despite product being hard to get. This year, we are on a pace to meet or even beat last year,” confirms Mike, 55. Roderer Shoes Inc. does not sell online and is not planning on doing so anytime soon. “If it comes to that, I’m out,” says Mike.

With a merchandise assortment ratio estimated at 55 percent women’s, 25 percent men’s and 15 percent kids, Roderer Shoes doesn’t face much push back on price from its steady customers, says Mike Roderer. With an average retail price range of $120-$150, the mix includes everything from ThinnComfort German sandals at $250-300 a pair and Sam Hubbard styles at $300 down to $69.95 for a pair of casual Clarks. Younger store customers have flocked to the store for Birkenstocks and Hoka. Other significant brands in the mix include New Balance, SAS, Oboz, Alegria, Taos, Stride Rite and Xelero.

As far as marketing goes, a store manager regularly posts items on Instagram and Facebook, though the store does not have a “certified digital marketing approach.” Instead, the marketing effort is more old school led by bulk mailers that offer things such as a “customer appreciation coupon” during the holiday season.

Roderer Shoes’ old school approach to business over the past 116 years isn’t likely to be changed by current ownership any time soon.

“Treat people the way that they wanted to be treated,” suggests Mike, later adding, “We live by a set of values, and it shows in what we do.”