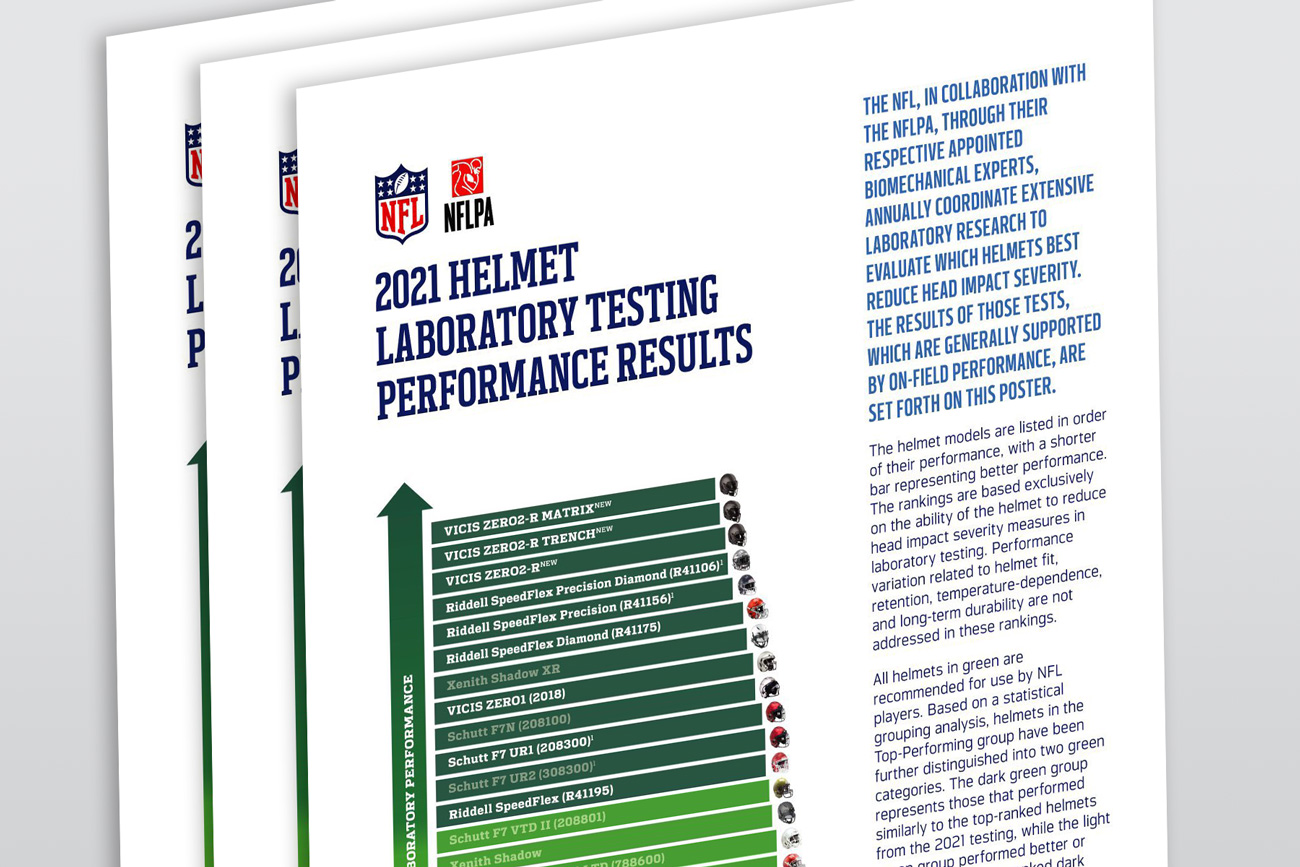 The NFL/NFLPA's eighth annual study on helmet safety is out and it turns out that Vicis has the top four performing helmets, with the Vicis Zero2-R Matrix ID Trench – a position-specific helmet for linemen – coming in as the top-rated helmet.

The survey was conducted by engineers who assessed the performance of all helmets worn by NFL players in reducing head impact severity. They tested 47 helmet models, including six new models never tested before by the league. Five of those six landed in the "top-performing" category.

"The helmet manufacturers are just really responding to the information we're giving them about how injuries happen," says Dr. Kristy Arbogast, NFLPA engineering consultant and co-scientific director and director of engineering at the Children's Hospital of Philadelphia.

Following the four VICIS helmets, five of the next six spots went to helmets from Riddell, including its SpeedFlex models and a new Axiom model. Xenith and Schutt also had helmets that tested in the "top-performing" section.

The results of the testing are displayed on a poster shared with NFL players and team medical, training, coaching and equipment staffs informing players of what helmets are performing well and which ones are falling behind.

The league said 99 percent of players were in "top-performing" helmets at the end of last season. Illustrating the continuing development of safer helmets, six helmets that just a year ago were in the "top-performing" group fell into the "not recommended" group for 2022.

Among new stipulations for this season are that current players who change helmets or players new to the league must choose from a helmet in the "top-performing category."

In all, 21 helmets tested were placed in the "top-performing" category.

"At least for the last several years, we've seen new helmets go to the top of the chart, and in pretty significant numbers, which tells me that there continues to be room for improvement in the safety capabilities of the helmets that are being tested," says Jeff Miller, NFL executive VP–health and safety. "As we continue to see performance improve year over year with newer models, there's optimism that next year we're going to continue to see the same."

Jeff Crandall, the NFL's biomechanical engineer, says the advancement of technologies is leading to more customization and position specificity. The goal is to have a helmet ratings system by position beginning with linemen as early as 2023.

"We really have not had a comprehensive way to evaluate one helmet versus another for a particular position, say offensive or defensive line," Crandall says. "That will come out this year. We anticipate having a poster next year that reflects that testing methodology and evaluation. So we believe that will really drive helmet innovation for position-specific going forward."

The league moved up the timing of the release of its helmet testing results by a month, in part to help equipment managers who will be working with players on potential helmet changes. Some helmet manufactures ran into supply issues last year that led to delays or an inability to fill orders for teams at the college and high school level.