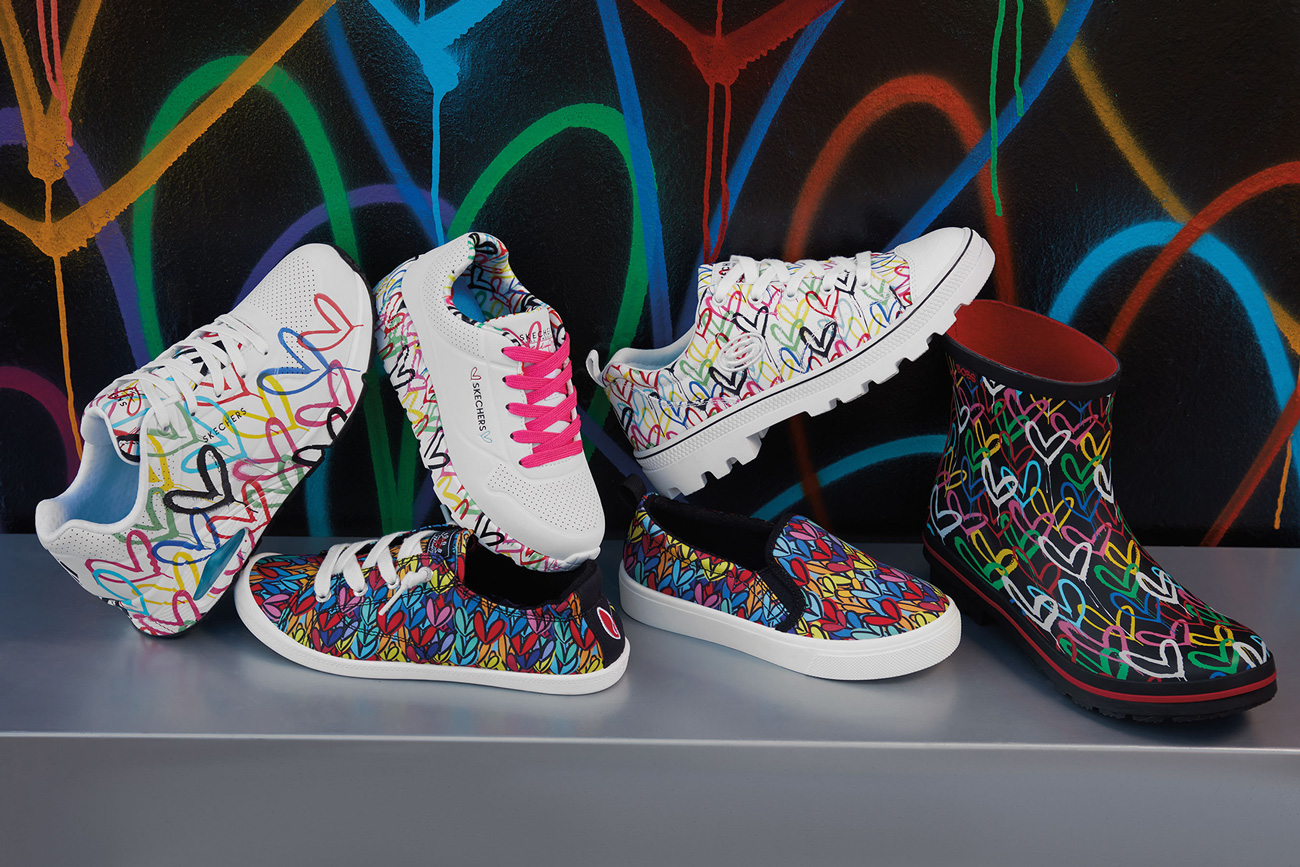 January 27, 2021
By
Bob McGee
&
No items found.
Inside the
Issue
Newsletter
Share:

The new Skechers x JGoldcrown collab will include both apparel and footwear for women and girls. The collection’s launch ties into a Valentine’s Day theme, featuring art from muralist James Goldcrown, whose colorful “Love Wall” heart designs will be featured on a range of lifestyle products. Initial styles in the Skechers x JGoldcrown collection are available now on the Skechers website, ranging in price from $32 to $85, and will launch at the brand’s retail account partners around the world in February.

‍Cole Haan, owned by private equity firm Apax Partners since 2013, withdrew its registration for IPO on Jan. 22. The company began working on the IPO process in 2019 and filed its S-1 document in Feb. 2020 at start of the COVID-19 pandemic. In FY19, nearly 86 percent of the brand’s $687 million in global revenues were generated in the U.S. from footwear ranging from sneakers and oxfords to chukkas and flats. This spring, men’s and women’s casual, sport, dress and seasonal styles will be available in 200 select Kohl’s stores with a broader assortment available at kohls.com.

‍Dick’s Sporting Goods, which will see President Lauren Hobart become President and CEO on Feb. 1, has raised her annual base salary to $1.1 million along with cash incentive bonus opportunities equal to 150 percent and 300 percent of salary plus a $5 million target equity award opportunity this year.

‍Walmart is losing its digital czar, Marc Lore, on Jan. 31 when he retires. He will remain with the retailer as a strategic advisor until Sept. 30. During his Walmart tenure, Lore worked on revamping WMT’s website, adding brand and improving delivery capabilities to help the retailer become a better online rival to Amazon. However, Jet.com, which Lore helped sell to Walmart for more than $3 billion as means to better reach urban consumers, was slowly absorbed into WMT’s website before being shut down completely last year. Also, several brands acquired by Lore, including ModCloth and Bare Essentials, were eventually ditched by the parent.

‍Academy Sports + Outdoors will sell 12 million shares, or approximately 13 percent of its outstanding stock as of Jan. 2, for principal shareholder KKR. Based on yesterday’s midafternoon price for ASO shares, the offering would gross nearly $296.9 million for the private equity firm and majority shareholder in the Katy, TX retailer. After the offering, KKR will own 56 percent of Academy’s shares to retain its majority ownership. Meanwhile, for the first nine weeks of its fourth quarter, the chain’s comparable store sales grew 16.6 percent on the strength of double-digit sales growth in all merchandise categories.