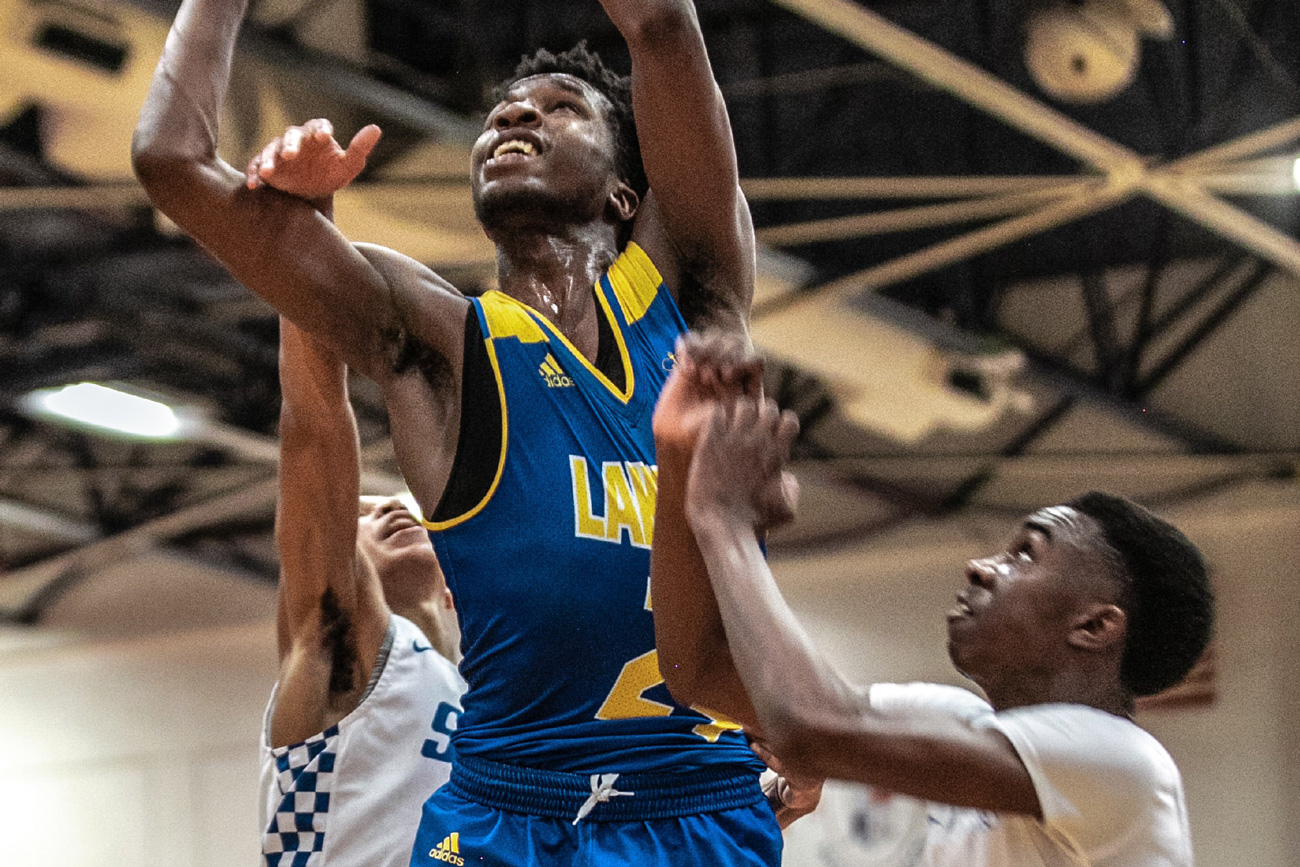 The heartbeat of youth basketball lives in Indiana.

The heartbeat of youth basketball lives in Indiana.

There’s no denying that certain states have strong affiliations with particular high school sports — baseball in Florida, football in Texas, wrestling in Iowa. When it comes to basketball, Indiana produces the most passionate players and, in many cases, some of the best players in the history of the game —  Oscar Robertson, George McGinnis and Larry Bird, to name just a trio.

Some states will debate whether or not Indiana produces the best players, but there’s no arguing about the love and passion that Indiana’s players have for the sport. That passion is shared by its coaches, parents, fans, sportswriters and broadcasters and it’s been that way for decades in the Hoosier state.

Need proof? Okay: 15 of the 16 largest high school gyms in the U.S. are in Indiana. And, of course, there’s always the 1986 movie “Hoosiers,” starring Gene Hackman, which was about a successful high school basketball team from a small school – the Hickory Huskers -- in rural Indiana.

With that background, it’s not a stretch to say that Indiana is a good bellwether for determining the business health of the basketball business in the U.S. After all, in these turbulent times, if basketball is strong and solid in Indiana that bodes well for the sport in the rest of the U.S.

So Team Insight went right to the source — the handful of team dealers in Indiana on the front lines of selling in this hoops-crazy state. Like the customers they sell, these dealers are passionate about talking basketball in their state.

The State of the Game

At the midway point of the 2021-22 basketball season, life is good for Pacesetter Sports, in Terre Haute, where owner Brent Compton reports it’s been a great year of selling hoops.

“It’s been a really good season in Indiana,” he says. “It’s been fantastic seeing full participation and games being played in full gyms.”

Compton sells anything and everything in basketball — balls, uniforms, socks, shoes, nets and practice gear. Complete basketball systems are also purchased on a regular basis.

Even better, players are not his only customers. “It’s been a great year for selling fanwear, too,” Compton adds.

Even though the state is definitely a hotbed, he says that selling basketball in Indiana is more involved than simply filling out an order sheet.

“My customers and coaches are very educated in the sport,” he says. “They want an order where everything from head-to-toe is a match. That also helps with selling fanwear. Fans want to wear something that connects them to their team.”

Despite the passion to buy by customers, it’s been difficult for Compton to deliver every order to every customer on time.

“We had some supply chain issues in basketball, particularly in footwear, but Under Armour is the one company that did a great job on getting us exactly what we ordered on time,” he reports.

Unfortunately for Pacesetter, while selling basketball in Indiana has been busy and brisk, it’s been the exact opposite in the neighboring state of Illinois, where it also does business.

“In Illinois, players are required to wear masks in practice and in games, which has negatively impacted interest and participation in basketball in that state,” explains Compton, whose son plays high school basketball in Illinois. “I don’t see the same numbers in Illinois that I see in Indiana, but we are selling more masks to schools there.”

“Our basketball business has been good across the board,” he says, with customers in more than 50 elementary, middle and high schools in Indiana. “We’re a one-stop shop for many basketball teams.”

Claussen knows that basketball is in good shape in Indiana because the enthusiastic crowds are back. He knows this first-hand because he also officiates high school basketball games “and the fans will bark at you if they don’t like your call.”

Across the state, basketball is also strong for Kratz Sporting Goods, based in Clarksville. Indeed, when asked what the hot items are, owner Allen Krebs answers that there is very little in basketball that he doesn’t sell.

“You never tell a basketball customer that you don’t have an item,” he says. “You find it and sell it.” The majority of his basketball business is focused on uniforms, basketballs, practice gear, backpacks, socks, fanwear and shoes.

“Traditionally, we have had a very good shoe business in basketball, but it was limited due to availability caused by supply chain issues,” he says.

While schools provide a steady flow of basketball business for Kratz Sporting Goods, Krebs adds that travel teams and local recreational basketball programs are a key part of his basketball revenue, too.

It’s not a stretch to say that Indiana is a good bellwether for determining the business health of the basketball business in the U.S.

“Travel teams are not as restricted as much by association rules and regulations, so we can have some fun with their uniform designs,” he points out.

Another growing part of his basketball business comes from fans and parents who are back in the stands this season and are placing orders through his online platforms, a convenience the coach and school appreciate.

“That’s one less thing that a coach needs to do and it gives parents a chance to order an extra team T-shirt,” Krebs says, agreeing that the special passion that people in Indiana have for basketball helps drive spending.

“In 49 other states, it’s just basketball, but in Indiana it’s more special,” says Krebs, whose father was a high school basketball coach in southern Indiana for many years.

In the northwest Indiana community of Valparaiso, basketball-related sales for Blythe Sports Shop have been “awesome and fantastic,” according to owner Mike Blythe.

The list of basketball-related items Blythe sells seems to have no end, but the major items are basketballs, uniforms, shoes, socks, training gear, practice accessories, rims, basketball systems, clipboards and, interestingly, a lot of nets.

“Basketball teams are cutting down quite a few nets every year in Indiana,” Blythe says, and that’s good for business.

According to Blythe, many high school teams didn’t buy new basketballs or uniforms a year ago because of COVID-related concerns and thankfully that conservative thinking didn’t come back this season.

“Coaches and players didn’t know what kind of season they were going to have last year so they didn’t spend much money,” Blythe says. But many of his more than 40 high schools opened up their budgets for the 2021-22 season and spent on two of the sport’s necessities — uniforms and basketballs.

Like other dealers in the state, another strong market is in fanwear. “Fans are filled with gusto this year and they are buying team apparel,” Blythe reports.

Also driving the bottom line has been the return of travel teams and local recreational youth programs, lending to the overall strong hoop business this season.

“This is Indiana and we live basketball,” says Blythe.

Pride in the Sport

In Rochester, IN, basketball is traditionally the top-selling category for Team Pride Athletic Apparel and the current season has been no exception, according to VP–operations Stan Keim.

Team Pride covers all angles as it provides apparel for players, coaches, fans and cheerleaders and manufactures many of its own items, especially apparel.

“We manufacture our own custom uniforms for basketball teams and cheerleaders,” says Keim. “We also produce uniforms for Adidas and we have our own in-house uniform brand called Epic1. And, our uniform decoration business is strong, too.”

According to Keim, fans are as excited about buying spirit wear from Team Pride as much as teams are focused on buying hard goods and soft goods.

“Our online fanwear and spirit wear sales have been tremendous,” he says.

Editor’s Note: In case readers could not tell, the author is a native of Indiana and a proud Hoosier basketball fan who predicts that Purdue University in West Lafayette, IN, will be cutting down the nets at the end of March Madness 2022.

The COVID Impact on Basketball

The presence of the Delta and Omicron COVID variants means that the current 2021-22 basketball season is being played with great caution and rules have been put in place to keep the players on the court.

“We know of a few states that will continue to use mitigation strategies, such as mask wearing, as determined by their state health department or local requirements, but play is picking up around the country,” reports Lindsey Atkinson, the basketball rules editor for the National Federation of State High School Associations (NFHS).

One of the biggest non-COVID decisions by the NFHS Basketball Rules Committee is giving state high school athletic associations the power to follow college and professional basketball by allowing states to adopt a shot clock for high school basketball.

“The two rules changes approved by the 2021 NFHS Basketball Rules Committee were the state association adoption of the 35-second shot clock for the 2022-23 season and the allowance of head coverings worn for religious reasons,” says Atkinson, who reports that two states – Minnesota and Iowa – have taken steps towards the adoption of the shot clock in 2022-23 and several others are using this season to collect feedback from coaches, ADs and officials before making any decisions.

According to the NFHS, participation in high school basketball is solid and strong among both genders, with the latest participation survey conducted in 2018-19.

At that time, 540,769 boys were participating in basketball as the third most popular high school sport behind football and track and field, while 399,067 girls were playing, ranking it behind only track and field and volleyball.

According to Atkinson, the NFHS will be collecting participation data once again for the 2021-22 athletic seasons.

On a national level, there are 27.8 million Americans who play basketball, based on research from the Sports & Fitness Industry Association, making it the most popular team sport in the U.S. And, of course, basketball remains extremely popular in Indiana, whether the supply chains are working or not.