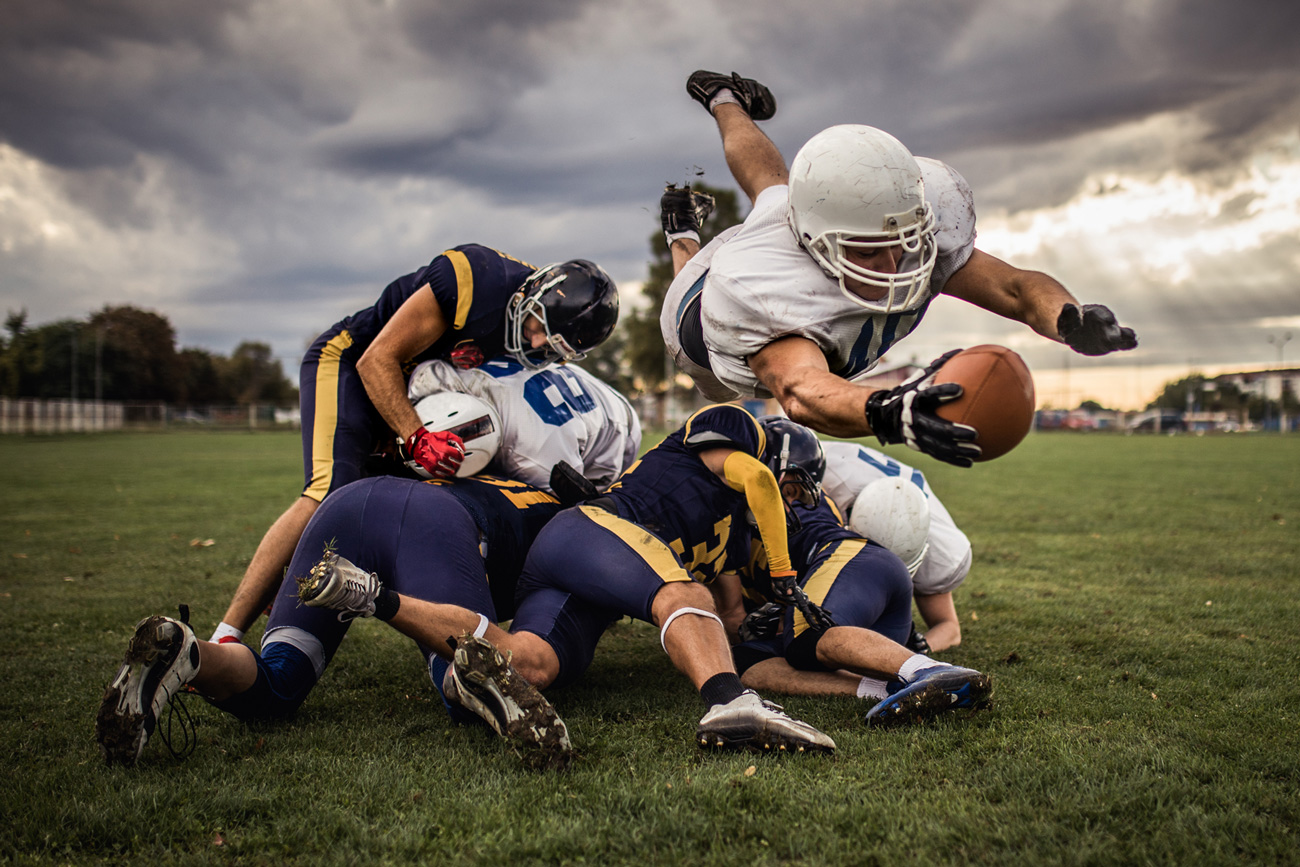 The number one team sport looks to play offense as it competes in a changing sports landscape.

The number one team sport looks to play offense as it competes in a changing sports landscape.

Football is always in season. If it’s not the regular season, then it’s the pre-season, the post-season, the off-season. And, of course there is the tried and true belief in the football-mad southern states that there are only two seasons in sports: Football and Spring Football. (This is even more true in 2021 as many states moved their fall football seasons to the spring because of COVID-19 restrictions, but hopefully that is a one-year thing. It’s fair to say that this has been the longest football season on record.) As a result, team dealers are selling something for football every week of the year, which is why despite all of its trials and tribulations it remains number one in the team business. The next few pages take a look at the state of the game in the U.S. as it struggles to rise from the pandemic to its rightful place on top of the team sports pile.

Like so many other football organizations, Pop Warner faces an uphill battle to return to normalcy.

According to Pop Warner Little Scholars executive director Jon Butler, every year, under normal circumstances, roughly 225,000 young children play youth football and nearly 100,000 youngsters participate as cheerleaders, under the Pop Warner banner. But, in Fall 2020, only 10 to 15 percent of the Pop Warner programs conducted any kind of football season. In fact, the season was so disjointed that the organization’s annual national championship – the Pop Warner Super Bowl, normally held in Orlando in December – was cancelled. (But Pop Warner’s Annual National Cheer and Dance Championships were held at the Orange County Convention Center in Orlando, where roughly 2500 cheer and dance competitors gathered to compete.)

While the 2020 Pop Warner season was basically a non-event, a few Pop Warner programs did play football this past spring to make up for last fall’s cancelled campaign. While Butler supports spring football, it’s not been as easy to implement as one would think.

“While the desire to play games, as a makeup season, is acceptable, many football programs have had issues with getting field space and registering players,” says Butler. “And, of course, we have multi-sport athletes who are committed to other sports in the spring.” He expects that Pop Warner youth football leagues operating in the spring will not become a regular trend.

“We granted a one-year exemption to any chapter that wanted to play football this spring,” says Butler. “For Pop Warner Little Scholars, we operate in the fall.”

With that in mind, Pop Warner Little Scholars is firmly focused on conducting business as usual this fall, with teams starting practice in early August and the season starting around Labor Day weekend.

“There is a lot of pent-up demand for football for this fall,” says Butler. “Kids want to be out there running around with their friends. And parents want their children playing sports.”

That’s great news for team dealers that are hoping to re-invigorate a youth football business that was practically non-existent last fall.

Butler adds that local programs will be conducted with extreme caution, out of respect for the COVID-19 pandemic.

“Each team will be following the safety guidelines as approved by our own medical advisory committee,” says Butler. “There are local laws that apply in every community, too.”

And Butler has confirmed that plans are already underway for Pop Warner Little Scholars to return to Orlando in December for the 64th Annual Super Bowl and National Cheer & Dance Championships to be hosted by Florida Citrus Sports.

There’s nothing like getting help from the top, and for high school football that means partnering with the National Football League (NFL), which in 2020 took an unprecedented leap forward and officially agreed to get more involved in supporting the work of the National Federation of State High School (NFHS) and its efforts to promote tackle football.

The foundation of this NFL support and involvement was a one-on-one meeting between NFHS executive director Dr. Karissa Niehoff and NFL commissioner Roger Goodell at the NFL offices in New York in 2019. It was scheduled to be a 30-minute discussion. Roughly 75 minutes later, Niehoff emerged with a new partner.

“He said, ‘what can we do to help?’” recalls Niehoff, who emerged from the meeting with a firm pledge from Goodell and his staff to assist the NFHS in its efforts to promote the sport of high school football and educate players and their parents about football’s many positive aspects.

“With more than one million players, the NFHS does own the landscape of tackle football,” says Niehoff. “We are an important population in the world of football. Historically, the NFHS has stayed back ‘in the shadows’ and remained in our lane, so to speak.”

Now, the NFHS has stepped out of those shadows and is heavily involved in current and future ‘big-picture’ football-related discussions. And, the NFL is standing alongside its newest pigskin partner.

With financial support from the NFL, the NFHS is focused on developing and executing a strategic plan with the primary goal of promoting the growth and development of high school football in the U.S., which can do nothing but help team dealers who rely on the sport year in and year out.

With more than one million players, the NFHS does own the landscape of tackle football.

A focus of the NFHS-NFL partnership will involve surveying state high school association administrators, high school student-athletes, parents, coaches and officials with regard to their experiences in football and the benefits of participation.

The NFL is supporting research into injuries along with the creation of programs geared at educating parents, players, coaches and administrators about the values and benefits of high school football. The NFL will help with messaging and advocacy strategies.

While boys’ participation in 11-player tackle football has exceeded one million participants every year since 1999 and remains, overwhelmingly, the most popular boys’ high school sport, there have been concerns about slight declines in participation in recent years. Through this partnership, the NFHS and NFL hope to better understand participation trends, identify areas for potential educational emphasis, and restore confidence in the minds of all stakeholders that the sport is, in fact, more focused on risk minimization than ever before.

“The more we invest in the future of the game of football, the better off the sport and its participants will be,” says Roman Oben, NFL VP–football operations.

As a part of the strategic plan for promoting high school football, the NFHS has hired 16-year USA Football staffer Ed Passino to be its senior consultant for High School Football Promotion. He started his new role in January.

“We are excited to work with Ed in this new capacity and continue collaborating with the NFHS,” says Oben. “Together, we aim to grow high school football, show the unique transferable life skills learned from the game and create value for coaches, administrators and players.”

“This partnership champions the preservation and growth of high school football by reinforcing the life-changing values unique to the game,” explains Oben, who played in the NFL as an offensive lineman for 12 years. “The NFHS and NFL will work together to promote player protection best practices and emphasize that high school football equips young people for success both in the classroom and in life by inspiring character, leadership, resilience, teamwork and other vital transferable life skills. The number one resource barrier is a lack of education.”

It’s worth noting that the NFHS has taken the lead in recent years to make rules changes that have helped make the sport safer.

“We have made great strides in concussion education, reduced contact time in practices, and removed some drills from practice such as the Bull in the Ring,” says Niehoff.

This current NFHS-NFL partnership is not temporary.

“This is a long-term relationship with the NFHS,” adds Oben. “Football at its core has been the subject to a lot of comments and criticism.” And, the NFL is standing by the NFHS as both groups defend the honor, integrity and value of tackle football.

Even better, this NFHS-NFL partnership is not limited to tackle football.

“NFL teams will be working with state associations in their state to promote interest and participation in flag football, too,” adds Niehoff.

According to Oben, flag football is a natural gateway to tackle football.

Filling A Void In A Local Team Market