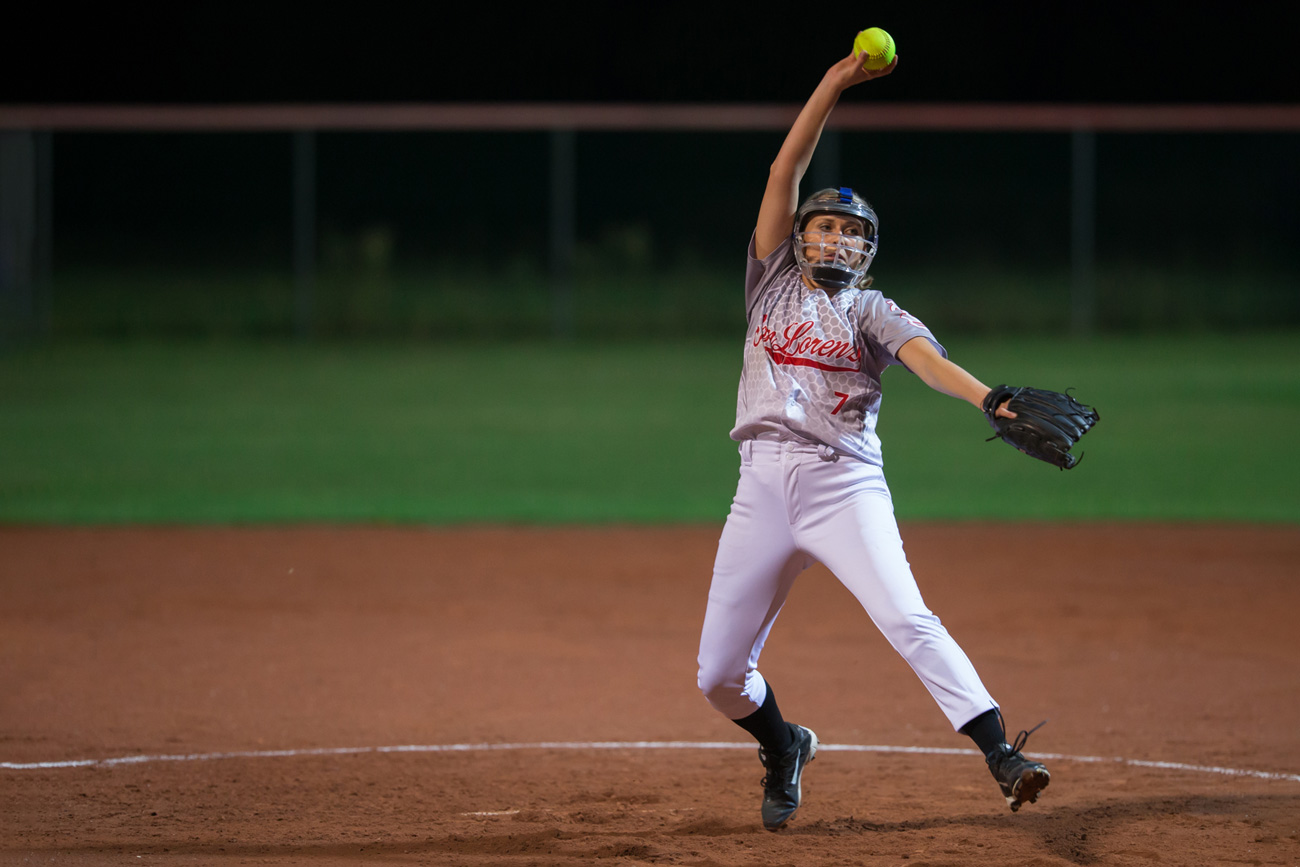 Girls’ fast-pitch softball gets set to shine again this season — if product can be delivered.

Girls’ fast-pitch softball gets set to shine again this season — if product can be delivered.

Spring is a time for renewal and rebirth — and this year for the full return of a girls’ fast-pitch softball season. That news is as welcome to team dealers as warmer weather, lower gas prices and on-time delivery of the products they ordered for the season.

Confidence in a Rebound

Almost unanimously, the team dealer community is confident that participation in fast-pitch softball will rebound to pre-pandemic levels. They believe that rebound effect should start sooner than later, but one of the biggest hurdles to overcome is getting the international supply chain reconnected and working as it has done in the not-too-distant past.

In Holyoke, MA, softball sales for Holyoke Sporting Goods are vibrant, especially in these months leading up to the spring season.

“Those travel teams play from the spring till well into the fall,” says Frey. “They will play in the fall until the snow falls.”

In eastern Tennessee, interest in fast-pitch softball is strong, but the demand for softball gear and equipment is greater than the supply in this part of the country — specifically eastern Tennessee and western Virginia.

“We spend most of every day looking for product so we can help our customers,” reports Chris Horner, owner of Team Sports Outfitters in Bristol, TN.

In addition to searching for product to buy and sell, he’s also patiently waiting for boxes of product to arrive at his front door.

“I have an order of softballs that I made last June and they have yet to arrive,” says Horner, who caters to local recreational softball leagues, high school teams and travel softball squads.

Under normal circumstances, Horner sells uniforms, softballs, cleats, turf shoes for coaches and field equipment. This year one item he doesn’t sell much of are bats.

“We’ve backed away a little from selling bats since so many players buy them online,” he says.

In northern Ohio, the fast-pitch softball business is returning, but “it’s still on the comeback trail,” according to Ron Wharmby, owner of Wharmby Sports, based in Youngstown, OH.

Like many team dealers, his fast-pitch softball sales are to local rec leagues, high schools and travel programs, although high schools represent his most important clients.

“The interest in playing fast-pitch softball is there, but everything is in short supply,” echoes Wharmby. “The other day a team needed batting helmets and had to go to Walmart to buy them because I was out of stock.”

When fast-pitch softball teams order product from Wharmby, they are purchasing catcher’s gear, batting helmets, player bags, stretch pants, visors and some uniforms. In prior years, the list of softball products he sold was much longer.

“We have lost much of the uniform business to the Internet,” Wharmby laments.

Softball bats, too, used to be a strong source of revenue for Wharmby, but things have changed.

“We have lost so many bat sales to various websites,” he says, admitting that he doesn’t have the space to store the many brands, models and sizes of bats that are necessary to properly cater to all possible customer requests.

In Marietta, OH, perched along the Ohio-West Virginia border, the fast-pitch softball business for Zide’s Sporting Goods can best be described as a good news/bad news scenario.

“Participation in girls’ fast-pitch softball appears to be on the rise, the phone is ringing and teams are placing orders, but we’re having some difficulty in delivering what’s ordered,” reports owner Rod Zide, admitting that this is not unusual in this environment. “The supply chain issues are affecting everybody across the country.”

“Kids are purchasing their footwear from other outlets on the Internet,” he says.

Meanwhile, in Terre Haute, IN, softball sales are strong and brisk for Pacesetter Sports.

“We do a lot of softball sales,” says team sales rep Tom Jones. “Actually, sales are exploding for softball and baseball, for that matter.”

For Pacesetter Sports, most of its softball sales are to travel teams and college teams. Its main college clients are Indiana State University, Rose-Hulman Institute of Technology and a number of junior college teams.

According to Jones, most of his softball teams are buying uniforms, hats and helmets.

“We sell anything and everything in softball, including bases and paint,” he says. “We would be selling cleats, but they are tough to get right now.”

In Battle Creek, MI, fast-pitch softball has not yet returned to pre-COVID levels of interest and spending.

“Kids definitely want to play and I have noticed an uptick in travel softball teams getting teams assembled and games scheduled,” says Keith Manning, owner of Jack Pearl’s Sports Center in Battle Creek.

According to Manning, one of the big reasons why fast-pitch softball is slow to return is competition from other sports such as travel soccer, AAU volleyball, travel basketball and track and field programs in schools. Travel fast-pitch and high school softball are no longer the only games in town.

For Jack Pearl’s Sports Center, the majority of the fast-pitch softball sales are for uniforms, pants, softballs and helmets, when they are in stock.

As with most team dealers, the three items that are not big sellers for Jack Pearl’s Sports Center are bats, gloves and cleats.

“Kids know what they want when it comes to bats, gloves and cleats,” says Manning, “so they purchase those items online. But, I do sell the occasional team bat or a glove as an emergency replacement.”

And, again, the three products Iowa Sports Supply does not sell in large quantities are bats, gloves and cleats.

“There is too much variety and too much risk,” says Netten.  “There are so many brands, hot colors and popular models that it’s nearly impossible to buy what you think will be popular with the players.

“If you buy the wrong items, you will be left with excess inventory that you will have to discount in order for you to clear your inventory for the next year,” he adds.

Out in the greater San Francisco Bay area, interest in girls’ fast-pitch softball is high, but the last two years have put a permanent void in the sport.

“It’s a re-start of the whole sport,” says Jeff Fingerut, owner of West Coast Sporting Goods, a 7000-square-foot facility in San Leandro, CA, that is dedicated to baseball and softball.

For fast-pitch softball players, everything that is needed to play the sport is on display — bats, gloves, cleats, batting helmets, bases, socks, visors, catchers’ gear and softballs (when they are delivered).

“Softballs have been tough to get,” says Fingerut, who adds that the impact of COVID-19 on West Coast Sporting Goods can best be measured by its payroll, which used to number 15 full-time employees. In early 2022 there is one.

Among other challenges, inflation has significantly impacted sales of softball gear. For instance, two years ago, softball bats used to cost $250 —  today they are selling for $400.

After enduring and surviving a shutdown of fast-pitch softball in 2020 and having negotiated some type of return in 2021, the landscape for girls’ high school fast-pitch softball looks strong and positive for 2022 and beyond, according to Sandy Searcy, director of sports, sanctioning and student services for the National Federation of State High School Associations (NFHS).

“The future of high school softball is very promising,” says Searcy. “It is encouraging with the number of young people who want to play for their high schools and communities.”

Participation in high school softball was growing each year leading up to the pandemic and various levels of participation occurred across the country over the last two years and now NFHS is optimistic for increases in players taking part in softball in 2022.

“Participation in girls’ fast-pitch softball appears to be on the rise, the phone is ringing and teams are placing orders, but we’re having some difficulty in delivering what’s ordered.” – Rod Zide, Zide’s Sporting Goods

The return of fast-pitch softball to the Olympics last year was a big plus that will generate dividends for the sport.

“The sport of softball, in general, continues to increase in status,” says Searcy. “Softball’s return to the Olympics is evidence of its popularity and the increase in media coverage presents the opportunity to strive for the ultimate honor of representing their country on the softball field.  It also increases the reach of softball at the grass-root level.”

Likewise, the increased coverage of the NCAA Women’s College World Series over the last several years has extended the fan base.

There are some rules changes taking place within fast-pitch softball within the very-near future that will impact equipment and gear.

“The NFHS Softball Rules Committee spent a great amount of time this year discussing the differentiation of damaged and illegal bats and specifically defined the penalty for a damaged bat that is re-introduced into the game,” Searcy reports.

In addition, new ball specifications will be required effective January 1, 2025, for high school competition, with balls manufactured with current specifications permitted for use through 2024.

The change in 2025 will occur in compression and weight/circumference for balls in fast-pitch competition. “These changes do not represent a difference in ball performance, but allow for better control over the manufacturing process,” she adds.

There are also a pair of rules changes that affect adornments. There are two significant player equipment changes involving the wearing of head coverings and beads for the upcoming 2022 season.

“The future of high school softball is very promising.  It is encouraging with the number of young people who want to play for their high schools and communities.” – Sandy Searcy, NFHS

According to Stephen Keener, president and CEO of Little League Baseball & Softball, this year’s Little League Softball World Series will be the first year with 12 participating teams as part of its expansion from 10 teams.

“After an exciting first year at its new home in Greenville, we are thrilled to bring back the Little League Softball World Series to North Carolina again in 2022 and provide that memorable experience to more than 100 softball players and their families,” says Keener. “It has been exciting to see the continued support and growth of our softball program and we look forward to bringing back our two teenage division World Series after two years of not being able to hold them due to the pandemic.”

Babe Ruth Softball started in 1984 and is now played in 47 states (Georgia, South Dakota and New Mexico are the only states that don’t have a Babe Ruth Softball program). More than 148,000 players participate in the program, according to Steve Tellefsen, president and CEO of Babe Ruth League.

“The softball participation numbers are very constant for BRL,” he says.

Babe Ruth Softball also has a pathway to a national championship.

“The highlight of Babe Ruth Softball is its annual tournament trail,” says Tellefsen, who explains that tournament teams from local leagues participate in District competition, with winners advancing to the State and Regional levels. Eight regional champions from across the U.S. as well as international teams compete in each World Series.