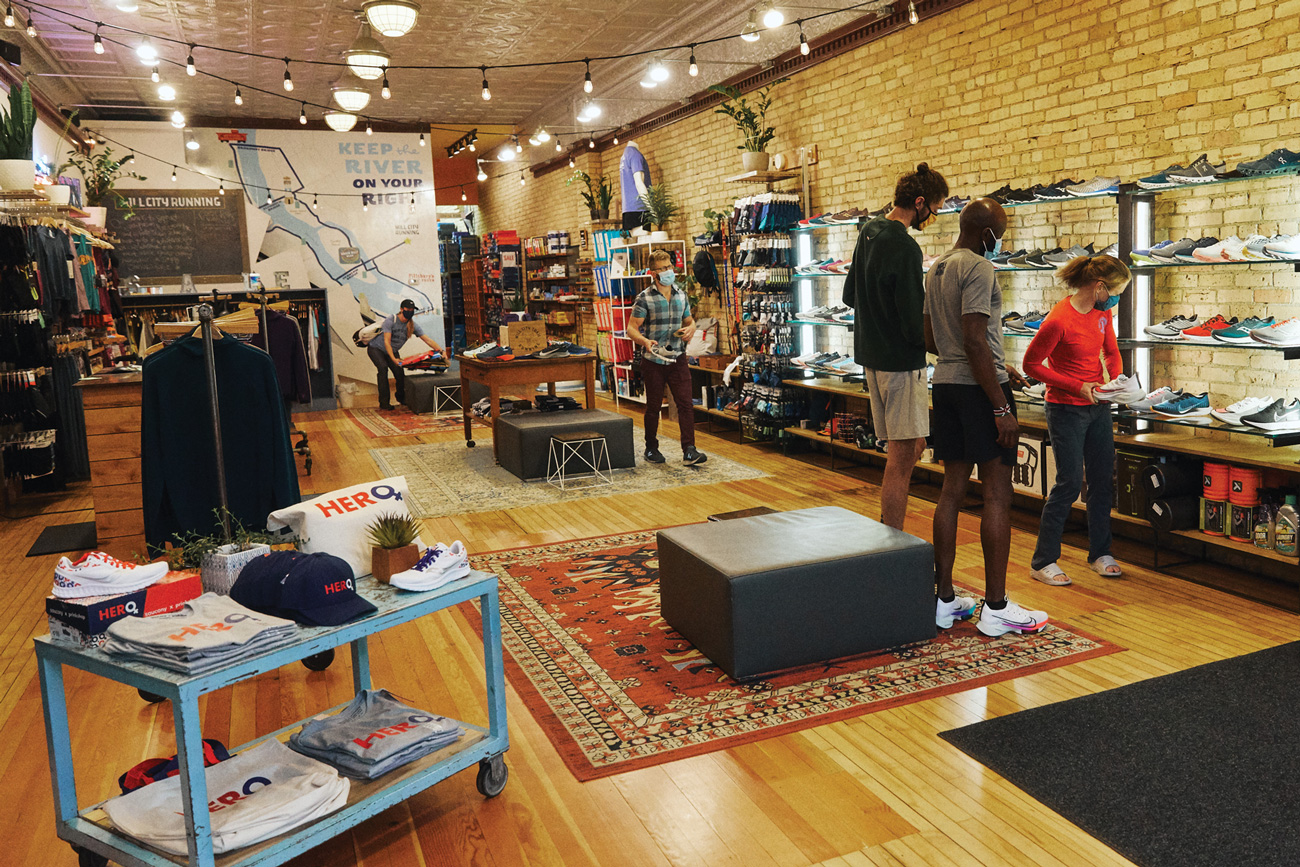 The new normal at Mill City Running in Minneapolis.

After a rollercoaster of a year, retailers planning for 2021 face a daunting challenge. After unprecedented business challenges and new hurdles to navigate seemingly daily, there’s no roadmap for envisioning the shape of the year to follow. The good news: Run shops see opportunity ahead. We spoke to running independents across the country about what they’re planning for 2021 and what’s in the playbook smart stores are crafting for next year...

One bright spot for the run channel has been the increase in people turning to the sport. And whether those runners were new to the run or coming back after time away, their business made a measurable difference. “We have a higher percentage of new customers than we used to have,” said Cody Angell, owner of St. Pete Running Co. in St. Petersburg, Florida. “This setback has placed people’s personal health and fitness in focus, and a lot aren’t comfortable going to the gym, so they’ve started running.”

To keep new faces flowing in, he said, the store would be starting a referral contest next month, where a new runner or walker who comes in to buy shoes is worth a $20 store gift card to the person making the referral.

“What we see is either that runner that is just new to the sport or a current runner who wants to expand out,” Jeff Metzdorff, owner of Mill City Running in Minneapolis, MN, confirmed. “Our client had typically been a road runner, who ran mostly around the city here. But we’re starting to see customers coming in and saying I want to get out of my apartment and head outside.”

Helping those runners expand their horizons is the plan for 2021, Metzdorff said.

“If they’re saying, ‘I want to run at the state park and have another arrow in my quiver,’ we can talk hydration and backpacks.”

Critical to the new-customer effort is events. Races, fun runs, training groups and classes of all kinds have historically been the lifeblood of the run specialty channel, and stores have felt the loss keenly. But after keeping customers connected with online challenges and virtual events through the spring and fall, run stores told us they’ve either started bring back events or will be soon. And while they may not look exactly the same, retailers are excited to make them a part of their picture again in the new year.

“What we’re hearing is that people are still craving togetherness in their community,” said Jen Brummitt, CEO of Grand Rapids, MI-based Gazelle Sports. After moving all events — including Gazelle’s signature Gazelle Girl 5k/10k and Half Marathon — to virtual runs, Brummitt said this winter the store would be looking at relaunching in-person options. “The question is how we reintroduce them in a safe and responsible way and welcome new people to the event experience,” she said.

At St. Pete Running Co., community events, as many as 150 a year, have been the “backbone of our business,” Angell said. Starting with a virtual Take the Lake Challenge run earlier in the year, Angell said the store has started hosting distanced group runs again, with masks required, marked-off spots to stand and stretch, and a new course that keeps people running loops in the same direction and spaced 10 feet apart.

Next up, Angell said, the shop is working on a hybrid Turkey Trot, where runners could opt into a virtual race or run on a course the store will set up, within a prescribed time. “The virtual runs have gone surprisingly well,” Angell said. “But some people, they’re virtual-ed out.”

Ann Ringlein, manager at Lincoln, NE’s Lincoln Running Co., concurred. The store has run several scaled-down races, and even when the events are no-frills, she said (“It’s like the ’70s now. We want you to run and then we want you to leave”), people have been happy to have a place to go. “I just wanted to race somebody,” Ringlein said a customer told her at a recent event.

For run shops in climates that offer changing weather, both new and longtime customers may be looking for gear to help them extend their outdoor run season, so waterproof, wind-proof and cold-proof options in apparel, accessories and shoes is a sales opportunity.

Apparel is the big focus at Mill City Running, Metzdorff said: “You can run outside in Minnesota in January, and if we can tell that story effectively, that’s going to be a really strong segment in 2021.”

“We’re cautiously optimistic that people will be sticking with running through winter,” Gazelle’s Brummit said. “More people will be looking for that gear that they don’t have, like that basic black pant, so we’re being really conscious to be in stock on the basics,” she said. “And we’re working with the staff to build our expert positioning so we can share that — that we’re in this with you, we know how to do it and we can equip you through the winter.”

Ringlein said Lincoln Running Co. would be bolstering its buys of headlamps and a limited supply of trail shoes and essentials, and will be bringing back in a new form a program that incentivizes customers to get outside and exercise every day. “People are going crazy inside, and I think everybody needs a push,” she said.

For a number of shops, online business was a lifeline through shutdowns — even if getting it running was a scramble. Looking ahead, owners said, those new ways of serving customers will continue to grow.

“The shutdowns accelerated the adoption of e-comm for run specialty,” Metzdorff said. “It moved the channel forward three years in three months.”

Stores reported that sales have continued to remain robust through new channels — whether it was a site with Fitted or Shopify, selling through Instagram and social media accounts or even just taking additional orders over the phone — and that they’ve stayed elevated even as in-store business returned.

“We’ve seen a huge jump in curbside orders for the holiday season,” Brummit said. “We’re glad it’s something we were able to do, and it’s a value-add now — those hard decisions are paying off.”

With 2020 events, races and even entire seasons postponed or cancelled for the year on both the local (track and cross-country) and international levels (marathons and the Olympics), marketing and product launch calendars were thrown out the window. The upside, some stores said, is that some of those packages and stories can get picked right back up for 2021.

The cancellation of the track season hit Anchorage, AK’s Skinny Raven Sports particularly hard, buyer John Clark said, since the season is a major connection point to high school runners and their families. Clark said the store will be making that category a priority for 2021, and will also tell stories about the product launches that got delayed or dialed back, like a speed-focused campaign highlighting the innovation of Nike’s Alphafly family and the new competitors launched by New Balance, Saucony and Hoka One One, among others.

“It was disappointing for us after we had made the investment and been prepared to support those launches, so the goal will be in 2021 to talk about them in a more meaningful way,” he said.

While 2020 was a challenge, retailers said they’ve emerged, in some ways, stronger than ever.

“We’re adjusting and living and doing what’s possible,” Gazelle’s Brummit said. The new year she added, will “require those decision-making skills we all developed. We can make quick decisions and adjust on the fly, and that will serve us really well.”

With new opportunities on the horizon, in fact, stores said they’re feeling bullish on the outlook.

“The obstacles have been a beneficial stimulus for us,” Angell said. “We’re smarter, more nimble and a much stronger business as we come out the other side.”

Full Speed Ahead: All About the Run