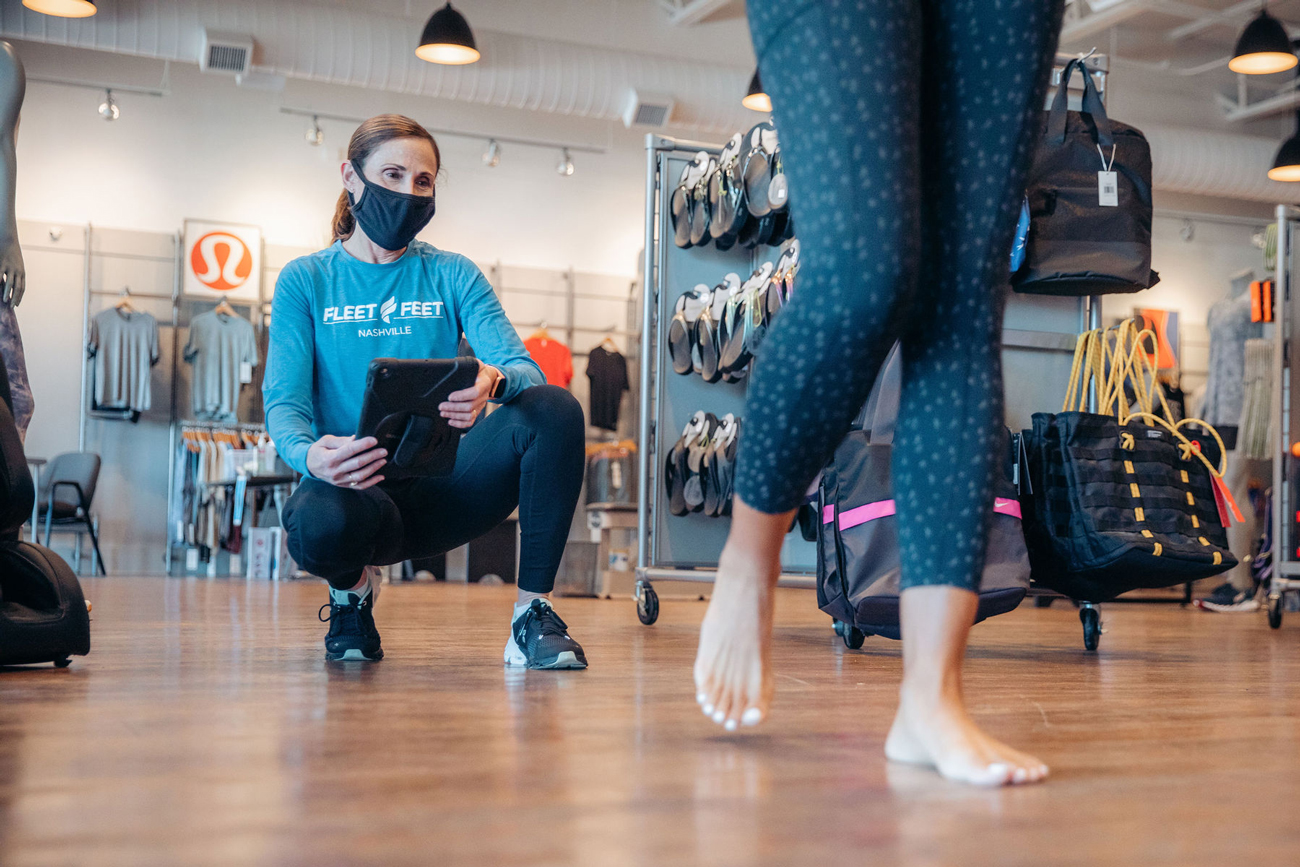 Service with a (masked) smile at Fleet Feet Nashville.

As temperatures warm and days get longer, retailers are seeing some light at the end of the tunnel. But after a year filled with shutdowns, supply chain disruption and unprecedented uncertainty, independent footwear shops say they’re also trying to prepare for what the new retail normal might look like.

The good news: While it’s not universal, multiple shops said that they’ve seen an uptick in traffic as vaccines have rolled out.

“We have ladies in their 60s and 70s coming out and buying three, four or five pairs because they’ve been cooped up for a year,” said Lanne Stauffer, who co-owns the two Market Street Shoes locations in Seattle, WA, with her husband, Ryan. “We’re definitely not back to normal yet, but we’re feeling it in the air for sure.”

Stauffer said shoppers are turning to core brands: “In this moment, they’re looking for their go-tos —Dankso, Hoka One One, Birkenstock. Staples are what people are coming out and spending money on.”

“We’re seeing strong get stronger and weak get weaker,” confirmed Lester Wasserman, owner and buyer for New York City’s Tip Top Shoes. Seasonal items like boots and slippers were standouts this winter, and entering spring, he said, comfort, athletic and outdoor styles from On Running, Merrell, Dansko and Birkenstock continue their strength from 2020 with “significant” growth.

“People totally simplified their life and their footwear, and athletic took tremendous share,” he said.

Karavel Shoe president Rick Ravel has seen the same trend. Ravel said that when his Austin, TX’s store reopened last year on May 1, it dropped 35 footwear lines and brought in more athletic and outdoor looks, including one new athletic line, as well as slippers. “Our business [prepandemic] was 30 percent athletic, 50 percent women’s and the rest was in men’s, accessories and orthotic,” he said. “After, women’s went to less than 20 percent of the business. People stayed home and started walking, and that [athletic] business exploded.”

“My earliest bet is fall and fourth quarter to really see a significant difference in traffic at the store level.” — Lester Wasserman, Tip Top Shoes

Today, he said, that business remains solid, and sandal sales have picked up as well.

“There’s a huge group of people who put off parties, weddings and celebrations over the past year and there will be a rush of that,” he said. “To get them to buy, it can’t be just a regular black pump; it has be unique,” Breton said. “We’re absolutely looking for more color and more exciting styles.”

Most retailers said the amount of shoppers they’re already seeing has them cautiously optimistic that in-store traffic is going to bounce back to where it was (or close to) before the pandemic — at some point this year, at least.

“I think in June it’s going to feel partly back to normal,” Stauffer said. “With tourists and travel starting up again and families out with their kids, I have a feeling June is going to be the time.”

Other retailers said they don’t expect the turning point to come until the third or fourth quarter.

Wasserman said while he expects vaccination availability and falling rates to have a significant impact on consumers by summer, his Upper West Side shop sees local consumers streaming out of the city for the season even in normal years. And with many area residents having moved all or most of the time to vacation properties outside the city to wait out the pandemic in 2020, he’s not expecting them back until the weather cools.

“My earliest bet is fall and fourth quarter to really see a significant difference in traffic at the store level,” he said.

“There’s a huge group of people who put off parties, weddings and celebrations over the past year and there will be a rush of that… We’re absolutely looking for more color and more exciting styles.” — Garret Breton, Comfort One

Ravel said he was looking to the second half of the year to see more normalcy as well. While local shoppers are starting to come back out now, he thinks the biggest boost will come when cruises and travel start to pick up in earnest.

Karavel Shoes has secured special financing and is using it to gut the store and rebrand under a new tagline: “Footwear for the Active Lifestyle.” The remodel will refresh the look of the store with new fixtures, paint and furniture as well as a remodel that will give more space to athletic and outdoor styles.

But stores aren’t letting the grass grow under their feet waiting. In anticipation of a back-to-business future, many said they were making plans and shaking things up.

For Christi Beth Adams, owner of the three Fleet Feet Nashville stores in Nashville, TN, that means reinstating training group and fun runs from her stores.

“I think we’re going to be able to have group runs sooner rather than later,” she said. That’s on her personal wishlist, too, she said: “I’m a hugger, and I really look forward to those group runs.”

And as Fleet Fleet Nashville celebrates 19 years in the community, she said, she’s thinking about ways her shop can channel the scrappy, adaptive mindset of an emerging shop to invite both old and new customers back into the store — maybe even some that picked up walking and running during the pandemic.

“As we’ve reopened we’ve realized, we put so much effort into training our employees and creating the best customer experience,” she said. “But we can’t deliver that experience if the customer doesn’t get inside the store. We’re trying to figure out how best to show up for our community in an engaging way.”

Other shops are building on online gains and investing more in the e-commerce channels that became crucial during shutdowns.

Ryan Stauffer said that Market Street’s e-commerce channel let them connect with some of the far-flung shoppers who would normally seek the store out during trips and vacations, as well as helping to serve local customers. Going forward, he said, the store is working on ways to make the online shopping experience hew even closer to its in-store counterpart.

“In this moment, customers are looking for their go-tos — Dankso, Hoka One One, Birkenstock. Staples are what people are coming out and spending money on.” — Lanne Stauffer, Market Street Shoes

Karavel Shoes is betting that some of the trend shifts the pandemic intensified are permanent — and is acting accordingly. According to Ravel, the store has secured special financing and is using it to gut the store and rebrand under a new tagline: “Footwear for the Active Lifestyle.” The remodel will refresh the look of the store with new fixtures, paint and furniture as well as a remodel that will give more space to athletic and outdoor styles. “Everything we’ve read said that after this pandemic, you need to literally start out as a new store,” Ravel said. “And that’s exactly what we’re getting ready to do.”

While there’s still uncertainty for independent shops, retailers said they’re looking ahead to change that finally seems like it might be in sight. At Market Street Shoes, for one, the Stauffers have started cautiously beginning to think, at least, about hosting their normal anniversary sale in the store — this year that marks their 15th in the business.

“I definitely see a light at the end of the tunnel,” Lanne Stauffer said. “I feel very bullish and optimistic.”