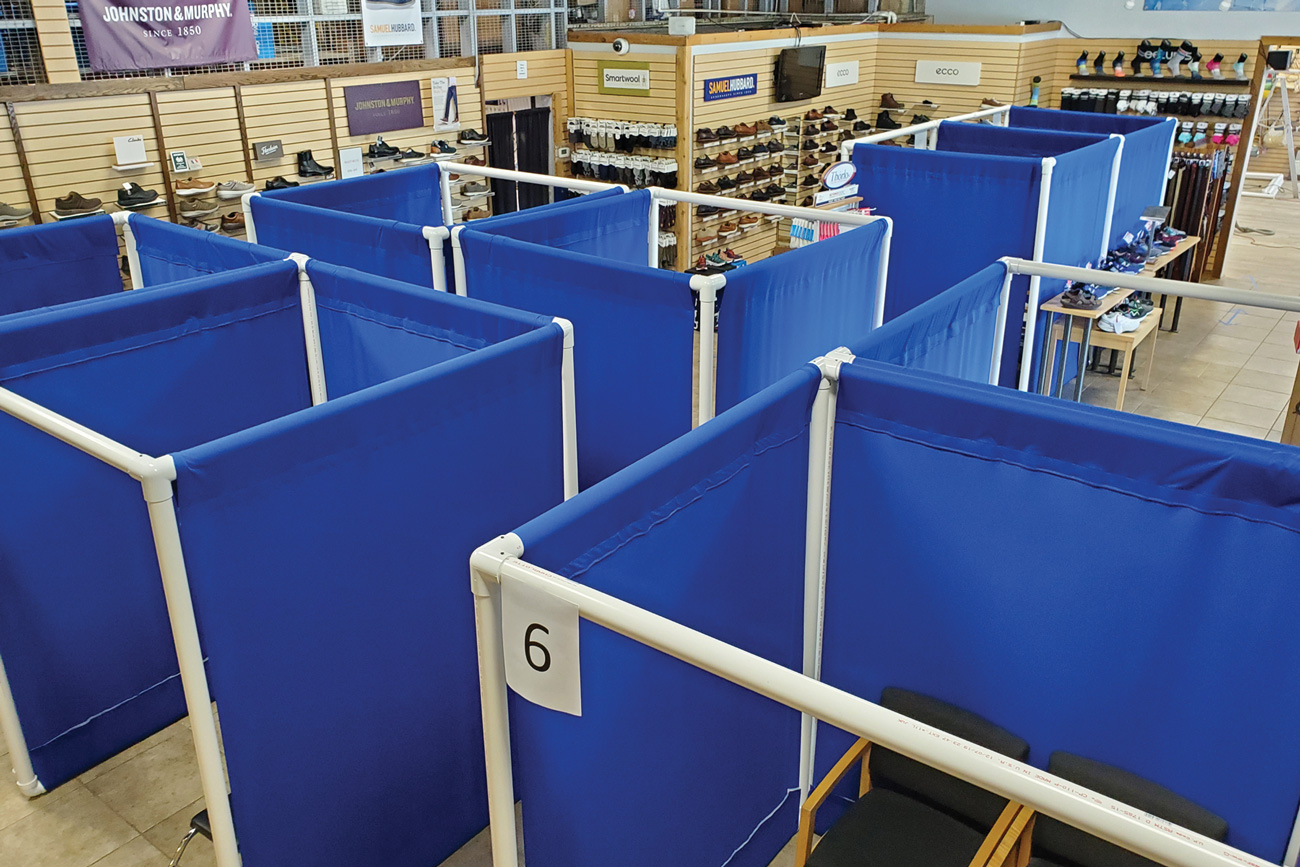 Customer service used to mean a thorough fit process, thoughtful product recommendations and personal attention. We should know: Footwear Insight has been recognizing shops that excel with the Gold Medal Service Award since 2015. But in the wake of the global COVID-19 pandemic and the shutdowns that resulted, the footwear independents who set the standard for treating customers right have had to grapple with an entirely new world: Service with a smile looks a lot different when you’re smiling behind a mask.

But even amidst uncertainty, the country’s best shops have been moving forward with innovative business models that let them stay in touch with the customers and kept business going, even under unprecedented challenges. We asked some top-scoring, Gold Medal Service Award winning shops how the crisis will change their business. Here, we break down the lessons they’ll be carrying forward into the new normal.

1. Customers Want to Feel Safe, Welcome and Cared For

Brenda Felger, owner of Felger’s Footwear in Houma, LA, said thoroughly disinfecting and cleaning all surfaces after each customer — counters, samples, door handles — is the new order of the day. “We’ve always had a strong cleaning regiment and now it’s stronger, which I didn’t think was possible,” Felger said.

Every store that spoke to Footwear Insight is requiring masks for employees (stores were split on whether they would enforce mask-wearing for patrons), and most are limiting the number of shoppers who come in the door at a given time.

Felger said she isn’t requiring masks for shoppers, although many do wear them.

“Most of them would rather be done with this — they’ve had enough,” she said. “They’re [feeling] refreshed to shop and to get out.”

Some stores, like Karavel Shoes, have completely changed their in-store environment in response to the virus. Owner Rick Ravel has set up 16 booths on the floor of his 6,000-sq.ft. Austin shop, allowing for 32 customers to be served at a time. Initially by appointment only and now serving walk-ups as space allows, Karavel reopened requiring masks and temperature checks for all shoppers. (The store has also been making and selling — to customers and other retailers — 3D printed face shields. The cost is $10, donated to the food bank of the buyer’s choice, and the initiative has raised more than $2,000 for food banks across the country thus far.) Ravel said he’s had one customer object to the precautions, but that by and large, they’ve been welcomed by his shoppers, who tend to fall into the high-risk senior citizen category.

In fact, he’s incorporated the message into his TV advertising, showing pictures of the set up with the message, “Your safety is our biggest concern.”

“We found that our customers are extremely comfortable and impressed,” he said.

Lanne Stauffer, co-owner of Seattle’s Market Street Shoes, said her staff has worked hard to strike a balance. Masks are required, and touchless hand sanitizer dispensers and floor clings illustrating a “responsible radius” (she adopted the “friendlier” term, she said, from her daughter, who learned it at nursing school) have been installed. And Stauffer said she’s ordered name badges with each employee’s picture on them, so customers can still see their smiling faces even when they are masked. And co-owner Ryan Stauffer said the store used the weeks it was closed to invest in additional training on sales techniques and customer service so the staff would be absolutely ready when the doors reopened.

“Most customers would rather be done with this.They’re feeling refreshed to shop, and to get out.” — Brenda Felger, Felger’s Footwear

“We really want people to feel welcome,” Lanne Stauffer said, “And not feel like they’re breaking the rules, that it’s a not a punitive situation.”

Most shops said all the additional ways to shop they launched during shutdown — curbside pickups, private shopping during extended hours, phone consultations and free shipping or options to buy online — will continue, and Lanne Stauffer said that’s definitely the case at Market Street.

“After-hours appointments, curbside pickup — as long as this is happening, until there’s a vaccine, I’ll accommodate anything,” she said.

As customers return to stores, owners are seeing material differences in how and what they are buying.

As his five Alan’s Shoes stores in Tucson, AZ reopened in the beginning of May, owner Alan Miklofsky said he and his staff have been diving into the numbers — and seeing changes. For starters: Men’s sales have bounced back in a way women’s have not. “Men seem less reluctant to come back in store,” Miklofsky said, noting that the store will be tweaking its social media messaging to appeal more to women.

But it’s not just the gender split. “We’ve been data mining, and my athletic business is not down as much as other segments,” he said. “We think after talking to other people that the ‘need’ business has resumed, and the ‘want’ business is lackluster.”

“We think after talking to other people that the ‘need’ business has resumed, and the ‘want’ business is lackluster.” — Alan Miklofsky

For the 14 Beck’s Shoes stores in Northern California and Nevada, a shift has occurred, too — but possibly in the other direction. With a portion of the workboot-focused chain operating continuously through the shutdown as an essential business and all doors open since mid-May, CEO Adam Beck said the industrial demand is “definitely there for us.” But Beck’s has seen a surge in lifestyle footwear and accessories sales. By volume, he said, the core industrial offering makes up 40 to 45 percent of the business, but has receded to about 10 to 15 percent of sales. He credits it to shoppers hungry to buy when so many places have been shut.

Steve Rueda, owner of Turnpike Comfort Footwear in Queens, N.Y., said he’s predicting post-shutdown sales will follow the need-versus-want pattern as well, and he’s adjusting accordingly. Rueda said his plan is to concentrate much more narrowly on the comfort staples and his pedorthic/custom modification business, and put less emphasis on fashion styles.

“Going into the fall, I’m not going to build on dress footwear — no one’s going out,” he said.

3. The Back End Isn't Business As Usual

For many businesses, decisions on buying, marking down and future orders are being reevaluated using a completely overhauled set of criteria.

Multiple retailers told Footwear Insight that the shutdown had made liquidity a top priority for the foreseeable future. CARES Act funds have been a bridge, although many retailers said planning for longer-term viability will require multiple approaches.

At Wesley’s Shoes in Chicago, owner Bruce Wesley said being approved for the Paycheck Protection Program as well as the SBA’s Economic Injury Disaster Loan programs have helped rebuild the business, but that rent abatements from the University of Chicago (the store’s landlord) and working with vendor partners have been critical.

We’ve kept people employed, we’re communicating more than we ever did and we’re managing cash flow better than ever before.”— Adam Beck, Beck’s Shoes

Alan’s Shoes’ Miklofsky said most stores will need to think differently for at least the balance of 2020, maintaining liquidity to keep their merchandise mix appropriate and meet business needs.

“The overall equation is that it’s less about profit this year than it is about cash flow,” he said. “Cash is king, and you’ll need to hoard or obtain as much cash as possible to get through the year.”

“The no. 1 takeaway is cash flow, cash flow, cash flow,” Beck agreed. But Beck said his shop has seen a silver lining in the struggles. “Company morale is at an all-time high. We’ve kept people employed, we’re communicating more than we ever did and we’re managing cash flow better than ever before,” he said. “It’s been a lot to take in, but we’re going to be better business people because of the pandemic.”

4. Service Is the Way Forward

The bottom line is that the effects of the pandemic and the shutdown are far from over.

Even as doors have reopened, most shops are planning for a year where sales will be down 25 percent, 50 percent or more, with many saying they’ll feel fortunate to break even for 2020. And many store owners said they didn’t expect to see fully normal traffic again until a vaccine was widely deployed. What will keep stores moving forward now and after, they said, was the service they offer.

“We’re in the sit-and-fit business and that’s still going to be around. We get people in whose feet hurt, but what we really sell is service. They can get the shoes anywhere. You want that experience,” Ravel said.

“What we really sell is service. They can get the shoes anywhere. You want that experience.” — Rick Ravel, Karavel Shoes

Miklofsky said the shutdown and reopening have only underscored how critical it is for shops to be connected to their shoppers.

“The people that have the advantage right now have very close relationships to their customers — their customers need and want them to be open,” he said. “If you haven’t already built a tight relationship with your consumer, you need to be thinking about what you can do in the next few weeks to build and multiply that strength.”