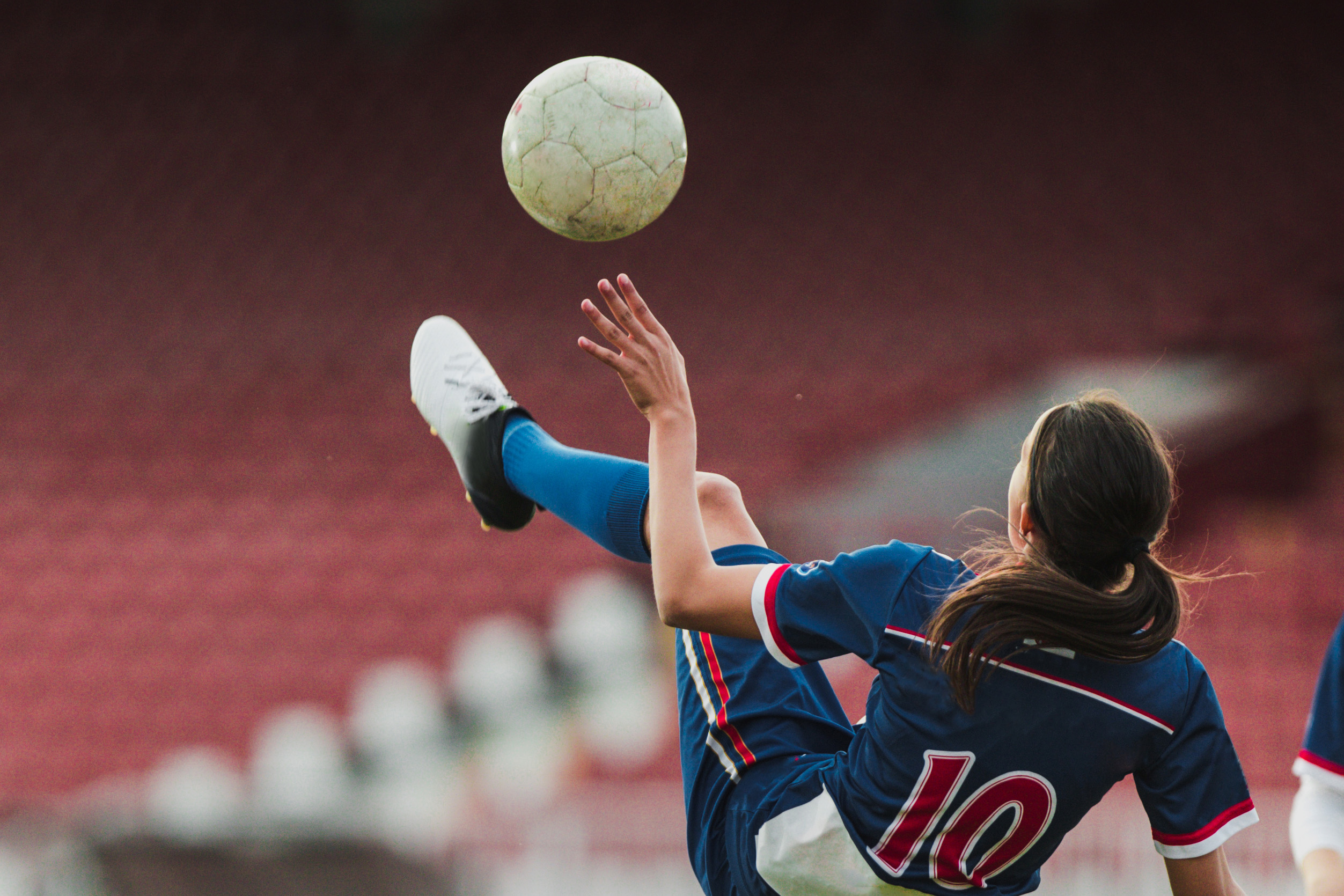 Dealers hope their World Cup’s runneth over as soccer returns to the pitch and participation numbers rise.

Dealers hope their World Cup’s runneth over as soccer returns to the pitch and participation numbers rise.

Soccer has long been touted as America’s sport of the future and has been one of the fastest-growing team sports in the country for a generation now. As the nation’s demographics continue to evolve, the data is finally catching up to those claims.

There is little doubt that soccer is quickly becoming a “first choice” sport for young athletes. Moreover, a soaring fan base fueled by a plethora of soccer available on TV and streaming services — ranging from domestic men’s and women’s pro leagues to college soccer, to just about every league from anywhere on the planet – plus a renewed desire to participate in the game, is helping to drive the sport’s success.

One interesting stat tells it all: In 2021, there were only six days in which a soccer game was not broadcast on U.S. television — leaving fans to choose from among 4600 individual matches that year, according to a recent report commissioned and released by Telemundo Desportes. More than half of those matches were broadcast in Spanish, showcasing the sport’s popularity among the Hispanic demographic — the fastest-growing population in the U.S. from 2010-2020.

All of this, combined with the waning of the pandemic and the end of the accompanying closures and mandates, along with the resumption of full game schedules for youth and adult teams and leagues, is good news for soccer specialty stores and team dealers. And the impact of the World Cup in Qatar can certainly only help.

SFIA also reports that indoor soccer logged 5.4 million participants in 2021, remaining flat from the prior year, which in this post-pandemic environment is actually a solid performance. From 2019-2021, participation crept up 1.4 percent.

In conjunction with these national trends, many soccer specialists and team dealers are witnessing burgeoning participation in their communities.

“Participation is booming in youth, recreational and travel soccer,” reports Mike Walter, GM of Mt. Pleasant, SC-based Lloyd’s Soccer, which also operates locations in Greenville, SC, and Atlanta, GA. “There are five to six clubs in the area and all have more players than they did last year. We’ve had about 25 percent more uniform orders for youth soccer in 2022 than in 2021.”

He attributes some of the growth to the fact that there has been ongoing migration to the South from other parts of the country due to weather, lower cost of living and better quality of life. Other factors include low barriers to participation on the rec side and more opportunities for very young kids to get involved in the sport.

“More parents play soccer, so their kids are now playing. The challenge now is just servicing the business. There are lots of passionate soccer players and fans, so you need to be on top of every big trend and brand and bring in unique items to retail,” Walter says.

David Zighelboim, president and owner of Soccer Locker in Miami, FL, is also benefitting from a demographic shift. “Soccer is big in my area. It’s a Latin-based community and lots of kids are playing soccer,” he explains.

“The bread-and-butter of the business is club soccer, but 60 percent of my overall business is tourists from Central America, South America and the Caribbean who come to Miami to shop. Local soccer is basically in the fall, but tourists are year-round.” He believes the main barrier to participation in South Florida is too few fields and parks and a lack of soccer complexes.

At Soccer Post Arrowhead in Peoria, AZ, manager Taylor Baker is seeing participation grow in the local community and explains that youth clubs and youth leagues comprise the majority of the business.

Likewise, Todd Garretson, owner of Greely, CO-based Garretson’s Sports Center, believes participation in his area is up by at least five percent.

“For us, the soccer business is pretty constant because the sport appeals to a wide range of kids. Youth and rec soccer account for our biggest sales overall and most is retail. We do have some high school and travel soccer accounts, but there are more dollars in youth and rec,” he points out.

Rob Schneider, owner of Valley Athletic Supply in Lansford, PA, observes that participation in his area has been steady and business is robust, leading to other challenges.

“Post-COVID-19, we can’t get our hands on enough product. There is strong demand and our numbers are up year-over-year,” he says, pointing out that Valley Athletic is not a huge soccer shop and it basiucally sells to some rec leagues, high school teams and travel teams. “We’re more likely to do field paint and balls for the rec leagues and uniforms and fan gear for travel teams. High school is hit or miss.”

Soccer participation may be rising, but dealers are still grappling with supply chain issues and many predict the problems are likely to persist well into 2023.

“For the past year the supply chain has been a problem and there’s been a shortage of product,” laments Soccer Locker’s Zighelboim. “We’re not getting product on time,” with Nike about three months behind schedule and Adidas two-and-a-half months behind.

Product was just starting to land even with the World Cup right around the corner. “On one hand, business hasn’t been better. The big [sporting goods retailers] can’t get product, but I’m a soccer specialty store that’s able to react,” he says. “I’ve got a lot of new customers.”

Zighelboim’s strategy is to be nimble and act quickly, shifting orders to other brands when needed. “The supply chain will get better. For the Fall 2023 season (July of next year), the supply issues will be resolved for the manufacturers,” he predicts. “Customer service is key for us, but everything is still based on inventory — whoever has the product will make the sales.”

For Walter, at Lloyd’s Soccer, obtaining footwear remains a challenge.

“Our marketing is impacted because we have to wait until the product gets here. We have more inventory now, so that’s helped,” he says. “Apparel is also a concern and we have to order a bit earlier now. We like to get the product in early so if there’s a delay, it won’t impact us as much.”

Walter’s solution is to “bump up our units, take more risk on the team side than on the retail side and order earlier.” He says, “We’ve seen a five to 20 percent increase in players, so we have to plan on that ahead of time. The issues are brand by brand — every season something’s missing. We hope that earlier ordering windows will help, but there are no guarantees that 2023 will be better. We’ve already placed orders for 2023, 10 months out.”

He continues, “Soccer is still dominated by just a few brands. If you’re a smaller store, you’ll struggle to get what you need. It’s a battle between inventory planning and servicing customers. Brands want growth and dealers are trying to expand intelligently. You just have to be prepared to respond quickly and chart the progress of the order.”

At Soccer Post Arrowhead, Baker has had issues with major vendors. “Everyone is fighting over the same product, particularly cleats, which is the majority of our business,” she says. We try to stay on top of things and we check the inventory every morning and look at different brands to fill in. I don’t see it getting resolved anytime soon — it could take a year or so to get better.”

The supply situation is also causing headaches, although to a lesser extent, among non-specialty team dealers.

“For us, most of our soccer business is youth and recreational. We’ve had to scrounge for shoes and shin guards, but clothing and balls aren’t as big a deal,” reports Garretson, of Garretson’s Sports Center. “It hasn’t had a big impact on our business because we went to different vendors to make everything work.”

He says they will either use their Sports Inc. buying group or will go online to look for product and he is optimistic that the issues will ease up after the first of the year. “Our biggest challenge is inventory and trying to carry a good mix of higher-end products,” he adds.

Schneider, of Valley Athletic Supply, believes that things are starting to normalize, but stumbling blocks remain.

“Shorts and polo shirts are a big pain in the butt,” he points out. “Youth and adult shorts, especially price point mesh shorts, are hard to find across most manufacturers. But we have a number of resources to use. We’re taking a chance on new vendors and brands that we wouldn’t have put in the mix in the past. Brand has become less important than the product itself. Supply issues should ease in 2023 and we’ll be in much better shape.”

A Morning Consult poll conducted in April, 2022 shows that soccer has certainly grown in popularity. Among the highlights: 32 percent of U.S. adults said they consider themselves soccer fans, including seven percent who said they are avid fans. The survey also found that 54 percent of respondents were interested in soccer, a greater share than any of the big four North American sports.

Many soccer experts predict that soccer will gain more interest and growth in November when the FIFA World Cup – the multi-billion-dollar extravaganza poised to be unlike any prior World Cup – kicks off in Qatar.

However, Qatar 2022 presents an interesting situation here in the U.S. Unlike past World Cup tournaments that have taken place in the summer, this iteration will occur in winter, during an already packed sports calendar that includes major league football, basketball and hockey. The U.S. Men’s National Team’s group match against England is slated to take place on Black Friday during the Thanksgiving weekend, which could prove to be a ratings boon.

“The World Cup usually does have an impact on business, but this year is different due to inflation and the timing of the tournament,” says Walter. “We try to do things in our local market such as watch parties, promos, raffles and giveaways to gain visibility. And if the U.S. plays well, that always bodes well.”

Zighelboim is fairly enthusiastic. “The World Cup always impacts participation in soccer, futsal and adult leagues, but has no impact on youth soccer,” he opines.

Garretson has a more cautious wait-and-see attitude. “The World Cup may be a slight factor in boosting participation, but the tournament will probably appeal more to adults,” he says. “We might see some trickle-down effect.”

In the grand scheme, the real question is not whether soccer can make it in this country, but how much bigger can it become?