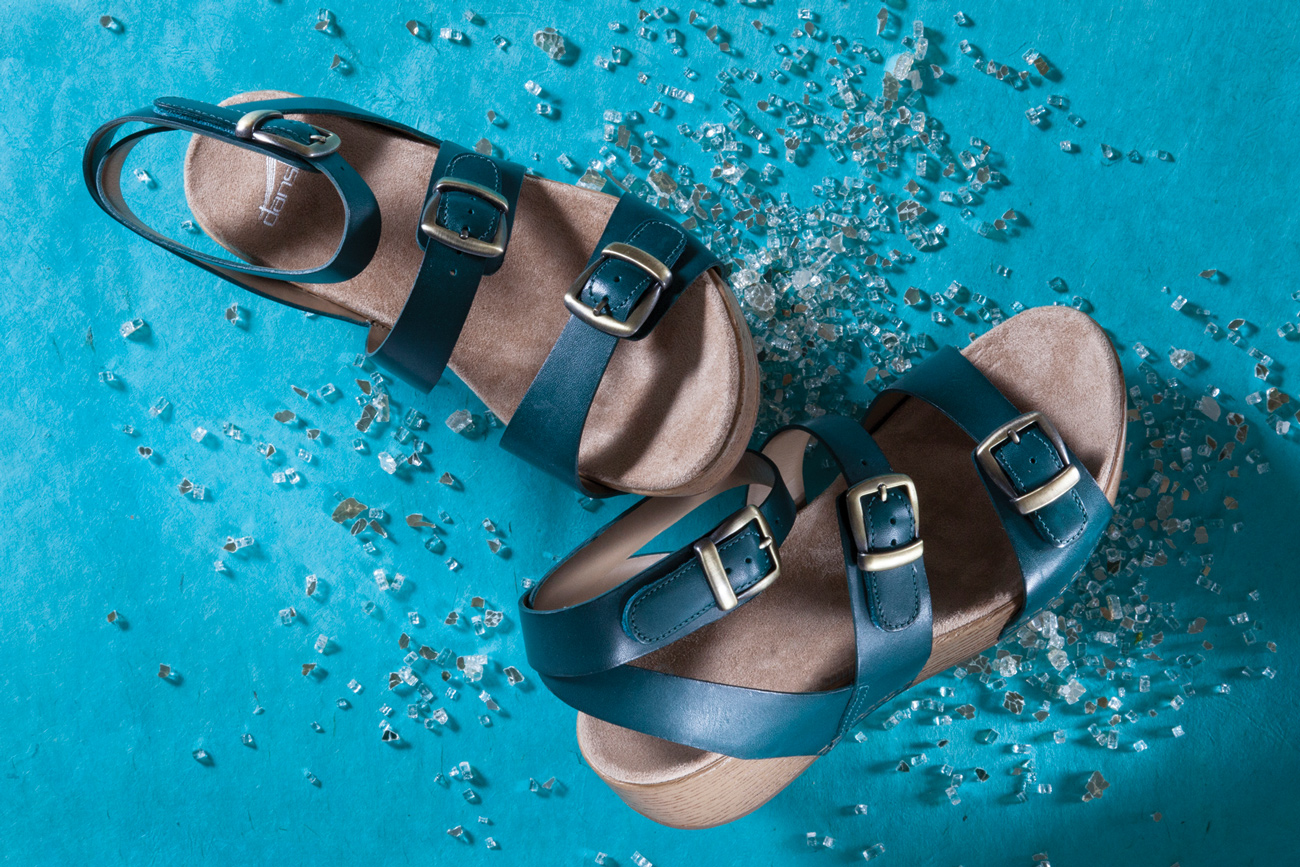 Dansko’s CEO on Tariffs, Trying New Things and Taking Over.

Dansko’s CEO on Tariffs, Trying New Things and Taking Over.

When Jim Fox stepped into the CEO position at Dansko on the first of the year, he knew he was filling big shoes.

The longtime CFO for the West Grove, PA-based comfort brand is the first person to serve in the top spot after taking over from founder Mandy Cabot. But Fox didn’t come unprepared. The CFO of the company since 2006, Fox was named president in 2013, part of a considered transition process that saw him take over an increasing share of the company’s leadership. (Founders Cabot and husband Peter Kjellerup remain on Dankso’s board of directors, Cabot as chair.)

In his new position, Fox said he’s determined to continue the trajectory the company has been on, growing sales and expanding the product line to serve Dansko’s core customer, who he describes as “that person who realizes that being comfortable so that they can get things done all day is really important.”

“I’m happy to say for 2019 that we’re ahead of last year in terms of sales and we’re ahead in terms of bookings, so all those metrics are pointed in the right direction,” Fox said.

Fox, who started his career in footwear with athletic brand And1 (founded by three of his freshman dormmates at Stanford) has had a front-row seat to some of Dansko’s biggest changes. He’s seen the brand grow its distribution to 2,000 doors across independents, department stores, mall-based retailers, as well as select online accounts, including its own direct-to-consumer business. He led the company’s transition to be 100 percent employee-owned as an ESOP (employee stock ownership plan). And while the brand’s iconic Professional stapled clog is still a juggernaut, attracting fashion consumers and comfort fans alike, to say nothing of a robust medical and restaurant worker fanbase, it’s no longer the majority of the brand’s sales.

“That’s where the company started. But I’m especially proud — and I can’t take credit for it, because it’s a whole team of folks, from Mandy, the whole product development team and so forth — [that now] we’re a well-rounded comfort footwear company, and we have a leadership position in things that have nothing to do with the stapled clog other than that they’re good for your feet,” Fox said. “We’re not just a clog company, we’re a footwear company, and that’s super exciting.”

Erika Vala, owner of Shoe Market in Brooklyn, NY said Dansko’s classic takes on the clogs are trendy enough to bring in fashion-conscious women — but are accessible enough for shoppers who want the trend but want wearable style.

“The Dansko customer today is a broader range in the market than it was even five years ago,” says Josh Habre, president of the Portland, OR-based comfort chain Shoe Mill. “They’ve done a great job of leveraging their reputation for all-day comfortable shoes: everything they come out with, they’re trusted by the customer.”

Dansko is one of, if not the, top brand for the store, Habre says, and their commitment to the independent channel is evident. “They’re actively trying to get customers to go through brick-and-mortar,” he said.

Here, Fox reflects on brick-and-mortar’s strengths, working for your shareholders and making transitions.

Your tenure as CEO began on the first of the year, but you’ve been preparing for the job for quite a while, as CFO for 13 years and as president since 2016. What’s been the biggest challenge in actually sitting in the top spot?

“A big issue for me is making sure it was a clean break from the CFO role. It’s a different perspective. In the president and CEO role, you have to take on a broader perspective and view issues in a different way. Certainly economics and financials are important, but you don’t want to be seen as the numbers person. Having done it for a while, it was very straightforward to know how I could add value from a financial perspective, but to add that value from a leadership perspective? That’s a big transition.”

Both founders are still on the board, and Cabot is chairman of the board. What does that bring to the company?

What’s your agenda for Dansko?

“At the most basic level, it’s growth. We want to continue to grow both in terms of the product sales and brand awareness. And how we do that is by making sure we’re in touch with and understand our consumers. We want to build on those successes that have helped diversify Dansko. We also want to maintain our leadership in the Heritage category, our stapled product, but not stand still. There are new technologies being introduced to make things lighter and more performance driven, [and we’re] introducing more fashionable clogs that provide comfort. Obviously athleisure is a huge trend in footwear and I’m especially proud of being able to introduce some things there that have had success at retail and resonate with consumers.”

“The biggest thing is that you’re face-to-face with your shareholders — your employee owners — every single day. It’s not like at other places where it’s a far-away investor who checks in on a quarterly basis. It’s the people you work with day in and day out, so that’s definitely a factor when you’re making decisions. I like to think that gives us a longer-term perspective. An ESOP [employee stock ownership plan] is a retirement plan for employees, so you look at it from that perspective. We’re trying to build up accounts for the 150-plus people here.”

How do you stay in touch with your consumers?

“It’s a combination of things. There’s some outside research we do to get feedback on our product, obviously paying attention to the vast amount of reviews that we get across all different channels, and just getting out and meeting people — and obviously we have a lot of consumers internally who are part of the process. But there is no perfect way to do this stuff: You have to get bits and pieces from different places to paint that picture.”

What marketing strategies have resonated with your audience?

“We’ve always been a word-of-mouth brand. We’re built on word-of-mouth and we have a lot of fanatical, loyal consumers. [And] word-of-mouth is more important than ever because people are skeptical of traditional advertising. What we’re trying to do is make sure our marketing makes that word-of-mouth go viral, whether that’s through our video assets or social media. Visual assets, whether that’s video or photography, seem to be the things that make the most [impact] these days, and we’ve certainly put a big investment in terms of people, especially internally, to do those things.”

Over the years, Dansko has made sustainability concerns part of its corporate mission. What are consumers asking for on that front?

“It’s important to be authentic. You don’t want to jump out there, ‘oh, we’re sustainable this or sustainable that’ if you can’t back it up and it’s not a fit. It’s an important issue and it was always important to Mandy and Peter: That’s why we have the LEED Gold-certified headquarters and distribution center. We want to deliver the comfort quality and value that our consumers expect, and we want to do that as responsibly as possible. It’s not just about environmental processes, although we do try to address those where we can. But we can take the broader perspective that sustainability is about your corporate practices, about being a good corporate citizen, things like the ESOP and how we treat employees and vendors. And it’s certainly part of the changes in consumer expectations and behavior.” ‍

New tariffs on China-made products are currently on hold, but the specter of increased duty rates has dominated the footwear conversation for months. How has Dansko been affected?

“It’s frustrating, let me put it that way. You’d like to have certainty over what duty you’re going to pay and some control over the costs, and it is frustrating, not knowing whether that will change tomorrow or in two weeks or in six months.”

Do you consider the post-G20 delay on any new tariffs to be a win for the industry?

“I look at it as a reprieve. I wish I could predict the future better than that, but it’s a big unknown. I don’t feel any more or less secure, other than I’m glad that at least it’s not happening immediately.”

Brick-and-mortar shops have wrestled with the impact their partner brands’ direct-to-consumer businesses have had on their sales. What kind of feedback have you been hearing from your retail customers about Dansko’s DTC operations?

“Honestly, it’s been almost always positive because of the way we’ve done it. We were kind of late to the party, and we’ve been a little bit under the radar in terms of [the site] just having new, full-priced product. Look, everybody isn’t always thrilled about it, but they understand. Dansko needs to be where the consumer expects us to be. At the same time, we direct people to retail locations, we do it in what I think is a clean way that our retail partners appreciate and understand. People tend to think of disruption as being a one-time event, and it’s not: It’s an ongoing process. There are so many things going on at retail, and sometimes people think it’s all Amazon and the Internet and it’s not. It’s a focus on the consumer and changing consumer behaviors, some of which we touched on, whether it’s changes in their attitudes, wanting personalization, issues about privacy, sustainability, wanting experiences, it goes on and on and on, so it’s important to stay in touch with that consumer.”

Are you bullish on physical stores?

“The good news is there’s a lot of things that brick-and-mortar does so, so well. [Stores] — especially our retail customers — do a great job, whether that has to do with curation and presenting the right product or having the trust of the consumer. The nice thing is the ones who are really good at it have an opportunity for growth, because people have a desire for that [experience]; there’s a real niche there.”