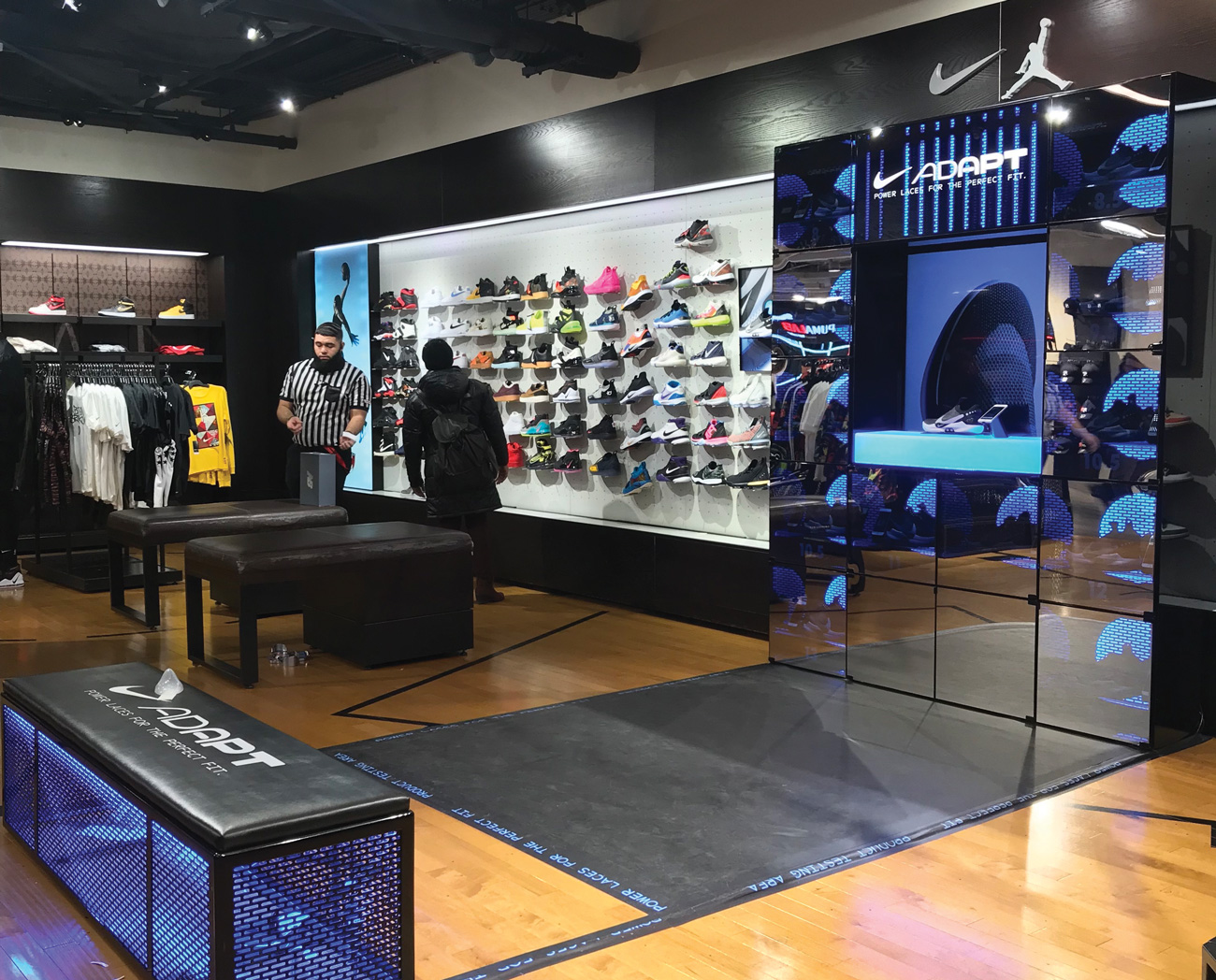 Chairman and CEO of Foot Locker discusses the retailer’s strategy and next steps.

Chairman and CEO of Foot Locker discusses the retailer’s strategy and next steps.

Almost 18 months after integrating its digital and in-store operations, and a year into an intensive back-end overhaul to speed up its site, Foot Locker has reaped the rewards of a unified strategy that makes its web, mobile and brick-and-mortar operations faster and more seamlessly connected. It’s a correction, Johnson said, that’s overdue.

Foot Locker ended 2018 with sales of $7.9 billion, energized by a fourth quarter where comp-store sales jumped 9.7 percent and sales hit $158 million — a far cry from the final quarter of 2017, where the retailer saw a loss of $49 million.

“We missed a shift in 2017 and we got punched pretty hard, but the truth is that it was a great wake-up call,” said Johnson, Foot Locker’s president, CEO and chairman. “We have to make sure we’re relevant with our consumers, that we’ve got great connectivity with our consumers and we build engaging retail spaces for them, whether those spaces are physical or digital.”

That’s meant change ups on the in-store piece as well. In January, Foot Locker announced its new Power Store model, which emphasizes connection to the local community and shop-in-shops dedicated to kids and women’s product. At the same time, the retailer said it would wind down its women’s focused SIX:02 banner, which it debuted in 2012 and had grown to 30 doors even as it struggled to find the right mix to appeal to style-focused women’s shoppers.

Under Johnson, who’s served as president and CEO of Foot Locker Inc. since 2014 (and was named chairman in 2016), the firm also entered a new era of extension: The New York-based company made a slew of investments in the fourth quarter of 2018, re-upping its investment in women’s online athletic fashion player Carbon38 with an additional $10 million, taking a $12.5 million minority stake in kids’ subscription box firm Rockets of Awesome and a $3 million minority stake in kids’ sneaker brand Super Heroic. The firm also put $2 million into a continuing partnership with sneaker design school Pensole, and most eye-poppingly a $100 million minority investment in secondary sneaker market powerhouse GOAT Group, which operates its eponymous sales site as well as Flight Club, one of the first names in the resell market.

And Johnson wants to push the envelope even farther in 2019. One example? A new loyalty program that rewards frequent buyers with desirable options like early access to coveted sneaker drops and concert experiences.

“We have to be more than just a retailer,” Johnson told Footwear Insight. “The retail of tomorrow doesn’t look like the retail of yesterday.”

Here, Johnson sounds off on navigating the brick-and-mortar/digital divide, the importance of retail basics and all those new partnerships.

The growth in Foot Lockers’ same-store sales took analysts by surprise — in a good way — in the 4th quarter. What changed about your understanding of what the consumer wants?

“It’s taken us a long time to truly understand that our customer’s driven by cool — that they don’t necessarily buy a brand, they don’t necessarily buy a category. With the digital device and the access our consumer has to data and visuals from all over the globe, our consumer’s really motivated by whatever is the coolest, [and] they want to see the options presented to them in a great environment, either physical or digital. They want us to be the place that has the best of the best.”

Getting the company onto a new digital platform was a priority in 2018. What made that behind-the-scenes investment critical?

“Our core consumer starts their journey with us on their digital device all of the time — their window into our store is however we represent ourselves digitally. The customer didn’t really see it, but they saw that the site worked faster and worked better. The ‘store’ is a combination of how we relate to the consumer digitally and then deliver on their expectations both physically and digitally. There’s lots of discussion in the retail industry of what’s a digital sale and what’s a physical sale these days. If you happen to click the ‘buy now’ button when you’re looking at your phone and you choose to have that delivered to a store and pick it up — the inventory’s coming out of the store potentially but the click happened online. So is that a digital sale or is that a physical sale? For me, it’s a Foot Locker sale. We all have to remove more friction from the experience — whether it’s digital friction or physical friction or delivery friction, last-mile friction, whatever it is. We all need to be willing to remove that and figure out the cost of doing that.”‍

During your Q4 earnings call, EVP and CFO Lauren Peters called out a metric that doesn’t always get a lot of attention: inventory turns. She was celebrating the fact that, as a company, Foot Locker had surpassed its long-time target of three turns. What made that a priority?

“After people, inventory is our biggest asset, so getting our people to be more productive and to generate more sales per hour is just part of the productivity gains that we needed to make. Did we celebrate it? Yeah. But the truth is it’s sort of like Roger Bannister breaking the 4-minute mile, right? It wasn’t possible, it wasn’t possible, it wasn’t possible, finally Roger Bannister did it and all of a sudden a bunch of people can do it. Our inventory hasn’t been as productive as it could, so breaking through that threshold and showing people we could drive a 9.7 percent comp or a low-mid-single digit comp for the year and turn our inventory three times says hey, we can do that.”

You recently announced your revamped loyalty program, FLX. What makes it different from past iterations?

“It’s not just discounts; it’s really about being able to experience things that are relevant to youth culture. It might be tickets to a concert, you might be able to get earlier access to launch shoes, there’s all sorts of things that we’ve got in mind. It provides a much more robust value to the consumer.”

After years of testing it, why was now the time to shutter the SIX:02 concept?

“We had a couple of false starts with SIX:02. First it was far more workout-led and really athletic, then we shifted probably too far to fashion, and then we sort of found a little bit of runway in an active-lifestyle. What we learned is that she’s got very discerning taste and she moves very quickly, so you’ve got to be willing to move with her.”

What did you learn about the women’s business from SIX:02?

“When we opened up our [flagships], we put a SIX:02 in each of those and gave her a space that was dedicated for her, we had associates who were committed to serving her and the assortment was different then she could find other places, and she loved it. She could walk out of that store with two SIX:02 bags in her hands and if you asked her where she shopped, she would tell you, Foot Locker. Right? So it was more about the experience than it was about the brand over the door. You’ll see us start to repurpose some space and make a lot of those experiences for her — I mean, certainly in the Power Stores you can see some really unique dedicated spaces for her. And a lot of that really was driven by the learnings from SIX:02. The core foundation of the women’s business for us will be in sneakers, and we’ll be able, through Foot Locker, Champs, Footaction and EastBay in the U.S., to attack the apparel side of it from a different angle in each of those banners.”

You’ve made two strategic investments in kid-focused brands, Rockets of Awesome and Super Heroic, in the past few months. What drew you to those labels?

“Rachel [Blumenthal, the founder of Rockets of Awesome] and her team have figured out how to make both [parents and kids] feel like they win. And Jayson’s sense of urgency around getting kids active is just an incredibly noble cause. Every business has to have a purpose, and [with Super Heroic], Jayson’s is aligned so well with our being active in the community. Kids is important: It’s a customer acquisition opportunity for life.”‍

Is customer acquisition or customer relevance what drove the investment into GOAT?

“It’s a really unique opportunity for us to extend sneaker culture, to extend the reach of sneakers. There’s a lot of people that play in the secondary market. How we manifest that across sneaker culture and youth culture, we’ll figure that out over time, but we felt it was just really the right time for us to enter the secondary market a bit, and we entered, in my opinion, with the best.”‍

Are there any concerns, as a primary, full-price retailer, of aligning with a reselling business? Where are there synergies?

“There is tension between the primary and secondary markets, and one of the things we’re going to be really clear with is that we’re not going to violate that line. It’s not like we’re going to take products out of the primary market to try and push them into the secondary market. This is about creating convenience for the customer. If we simply used Foot Locker as a pickup and dropoff spot or maybe there’s a Flight Cub space inside one of our Power Stores. The ideas are endless, quite honestly.”

You’ve been vocal in the past that you don’t see brick-and-mortar retail going anywhere. Are you still bullish on stores?

“I don’t believe there is a retail apocalypse. We’re in a lot of malls, and handicapping risk against the mall’s livelihood, these things occupy us. You just have to be really agile with the consumer these days and be confident in where you’re going — and we are.”