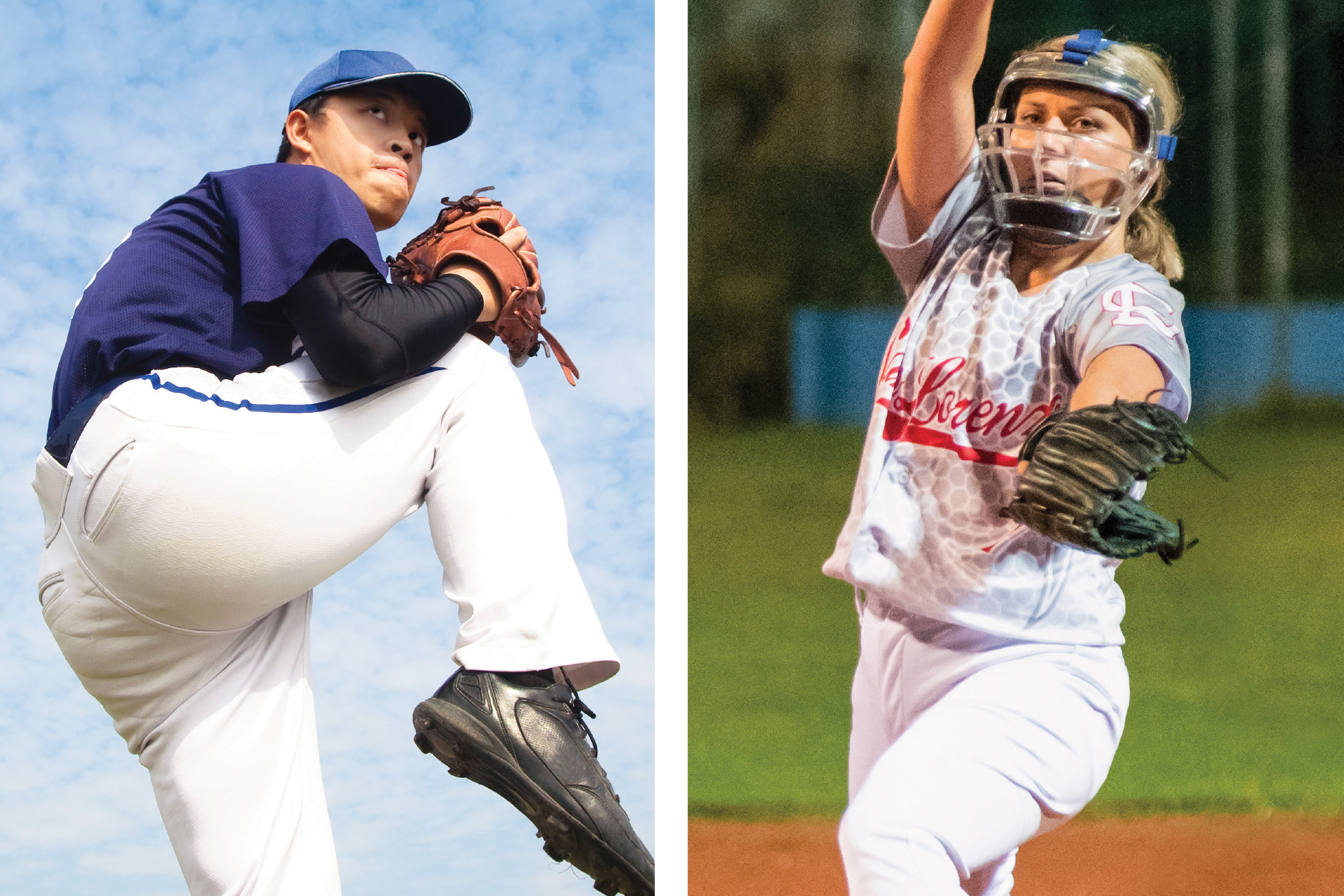 Baseball and softball get in scoring position by building awareness and participation.

Baseball and softball get in scoring position by building awareness and participation.

Participation in both baseball and fast-pitch softball is continuing to trend upward, especially at the high school level. Although schools, leagues, organizations and the sports’ governing bodies are pleased with the growth, many dealers are still feeling a pinch, citing such variables as unseasonable weather, ever-increasing Internet competition, and the steady pull of video games and electronics that are siphoning players away from the diamond.

There’s also one other big detriment: bad sideline behavior by those who should know better. “If parents would stop acting like jackasses and allow kids to play for the love of the game, it would help boost participation,” quips Chris Terry, owner of Moulton, AL-based Dixie Diamond Sports. “Ban parents from games!”

Cringe-worthy outbursts aside, most of the grown-ups who are actually running things are doing right by the sports. Moreover, the inclusion of baseball and softball in the upcoming 2020 Summer Olympic Games in Tokyo is expected to further heighten the sports’ visibility in America and around the globe.

Baseball by the Numbers

“We’re excited about baseball and participation is on an upswing. More than 16,196 high schools and more than 500,000 kids are participating,” says Elliot Hopkins, director of sports, sanctioning and student services at NFHS.

For the 2017-18 season, NFHS reported that boys’ baseball was the third most popular sport at the high school level, behind basketball and track and field, respectively. It also ranked fourth in the number of participants, totaling 487,097.

Rounding out the top 10 are Florida, Michigan, Missouri, Pennsylvania and Oklahoma.

Interestingly, more young women also want to experience baseball. “Many girls are introduced to the bat and ball at the T-ball level, ages four to five, and they migrate to softball later at around age nine or 10,” Hopkins notes. “Baseball is a faster game with a smaller ball and many girls like the challenge of playing with boys.”

For example, in the 2017-18 season, 75 high schools in California had 367 girls playing baseball and 43 schools in Texas afforded 464 girls with that same opportunity. Additionally, 298 girls in Ohio, 183 in Colorado and 75 in Indiana also played high school baseball. The numbers are small, but certainly trending upwards.

“Baseball will continue to grow,” predicts Hopkins. “Traditionalists continue to see it as an American sport and there’s a huge fan base and huge awareness.”

The reasons are many, he continues, primarily that the game is relatively inexpensive to play and it’s an easy-entrée sport that’s steeped in rich tradition in the U.S.

“We’ve only had one or two rule changes in the past couple of years – most changes revolve around equipment – meaning that the sport is settled, mature, easily understood and easy for coaches and officials to arbitrate. This allows parents, fans and participants to have a better experience.”

Softball by the Numbers

The story is much the same for its sister sport of softball, where high school fast-pitch softball is continually growing and expected the stay on that positive path. In 2017-18, there were 367,861 participants in fast-pitch only, and the game was offered by 15,544 high schools. Fast-pitch is also in 49 of the 51 state associations.

Sandy Searcy, director of sports at NFHS, explains that there is a significant uptick in summer leagues, thanks to USA Softball and other organizations that host competitions, and the 2020 Olympics are expected to help raise awareness, too. “Softball involves a lot of kids and there is a low level of injury, both of which are appealing,” Searcy says.

Fast-pitch softball is one of the 10 most popular girls’ high school sports in the U.S., ranking fourth in schools behind basketball, track and field and volleyball, respectively, and holding the number five spot in terms of participation. The sport has seen steady growth over the past few seasons, increasing from 362,000 participants in 2014-15 to 367,861 players in 2017-18.

Also in the top 10 were Michigan, Illinois, Florida, Missouri and Wisconsin.

“With travel teams, the baseball/softball business keeps getting larger and larger. Travel used to be spring only, but now it’s become year-round,” says sales manager and VP Allen Krebs. “New indoor facilities and earlier starts and later ends to the seasons help business.”

The category as a whole is growing slightly and Kratz does do a good Little League business, he reports, but those numbers are declining. However, travel sales are increasing.

Not surprisingly, the baseball/softball category presents a few unique challenges for Kratz. On the uniform side, “everybody wants something different and doesn’t want to look like the guys next door. Sublimation makes this possible,” explains Krebs.

To further bolster sales in the category, Kratz has developed online shops specific to teams and the dealer’s website is also e-commerce compatible and sells stock product, more so than custom uniforms.

“We also rely on word-of-mouth for uniforms and have been private labeling uniforms with our vendors.” Krebs says. “It’s great advertising for us, but our biggest thing is relationships, which means making sure that orders are correct and delivered in a timely manner.”

As for equipment, bats are always a challenge — there’s not a lot of profit in bats and you never know what’s going to be hot from year to year. “Different bats and regulations and governing bodies make it difficult for us to determine what bats to carry — there are lots of sizes and regulations to figure out,” Krebs says.

In neighboring Kentucky, Duke’s Sporting Goods continues to do big business in baseball and softball. The dealer, with one location in Elizabethtown and one in Bowling Green, notes that baseball is growing and is currently its best retail sport. Softball remains healthy. but flat. But these trends go in cycles.

“Baseball is big. The sports park in Elizabethtown draws lots of teams and that’s good for retail sales,” reports owner Dale Keith, who adds that youth softball league participation is down a bit this year while high school softball is still strong. He reports that spring sports – including youth and high school soccer – have been the best for his business overall. In relation to other team sports, Keith says that baseball is larger in participation, but football is still king in terms of dollars.

The greatest challenge is from Internet sales, where Duke’s tries to meet every price it can. The dealer also offers online stores for schools and teams.

“We do our own printing, monogramming, design, trophies and letters for awards jackets — we’re a one-stop shop and we try to keep everything in-house,” Keith says. “Coaches love the convenience of our online shops and they’re good for us, too, because we don’t have to chase down payments — it’s all done up front.

“Service is key in baseball and softball,” he adds. “We want to make everybody happy, which is hard to do. But we know our customers and that makes a difference.”

Further down south in Alabama, Dixie Diamond Sport’ Terry reports that baseball is doing well and softball sales are especially healthy and both categories are growing. “Baseball and softball are doing better for us than other sports and the biggest part of our business is youth leagues, with high school being the largest portion,” he says.

As for the 500-pound Internet gorilla, Terry believes that the best way to compete is to “find margins you’re comfortable with and stick to it. Figure out your niche.”

“We service it all, from age four to seniors in their 70s and for us, baseball is bigger than softball,” he says. “We cater to fast-pitch softball leagues and individual teams for high school players. For baseball, high school is big and we also have a huge business in T-ball.”

“Service is key in baseball and softball. We want to make everybody happy, which is hard to do. But we know our customers and that makes a difference.” – Dale Keith, Duke’s Sporting Goods

Like many other dealers, Fingerut admits that the most perplexing part of the business is dealing with the Internet. “We’re not online, but we keep our prices fair and we have a big inventory that allows us to compete,” he says. “One of the biggest challenges is competition from our vendors that are selling direct. Nobody knows how to handle it.”

Back on the East Coast at Jim Dalberth Sporting Goods, in Rochester, NY, the news is not quite as good.

“This has been a tough spring for baseball,” laments owner David Etzel. “We still sell stuff, but the season is very short because of weather, particularly in the high school and college markets.”

He does report that softball is up a bit and is very popular in high school, but the baseball business is shrinking mostly due to a downturn in interest. As a spring sport, lacrosse is very strong in his area and has taken share away from baseball, though not softball.

Like many others around the country, Etzel is frustrated with the amount of retail being done online, and worse, direct from vendors.

“We don’t sell online. I think we’re losing to the Internet, but we do sell direct to high schools. But in terms of retail, that business is dead,” he says. Another challenge: It was difficult to book programs with other vendors besides Spalding, because New York State adopted Spalding as the only ball.

“We serve high schools and colleges for both baseball and softball and also handle a couple of travel teams and leagues, but that business is now about one-third of what we used to do because of the Internet and decreasing participation,” he adds.

Despite the challenges, Etzel believes that Cal Ripken programs have done a lot to generate interest in baseball and softball. As for assuring the sports’ future longevity and popularity, he says the solution is clear: “The people involved in both sports have to work more to promote them.”